A new partnership among two prominent Israeli venture capital funds, a handful of major private-sector companies and the city’s economic growth development enterprise is hoping to turn New York City into the nation’s leading center for yet one more major industry: cybersecurity.

Cyber NYC, as the project is called, is among the nation’s most ambitious cybersecurity initiatives, which over the next decade could transform New York City into a global leader of cybersecurity innovation and job creation.

The multiyear project would simultaneously create a Global Cyber Center in Chelsea, a cybersecurity innovation hub in the SoHo neighborhood of Manhattan and an academic cybepartnership with area colleges, such as Columbia University, New York University and City University of New York. At the same time, major corporations such as Goldman Sachs, Mastercard and PricewaterhouseCoopers also are participating in advisory roles or to assist with the project’s training and hiring.

“We are at a seminal moment in the trajectory of the cybersecurity industry,” said James Patchett, president and chief executive of the New York City Economic Development Corporation, which is spearheading the Cyber NYC initiative, including assembling and leading public-private partnerships and developing and overseeing six programs to grow New York’s cyberindustry and expand the work force.

“Making New York City the epicenter of cybersecurity makes complete sense because New York City is where all the customers are,” Mr. Patchett said.

Cyber NYC will initially be funded by about $70 million in private investments, including from the two Israeli firms: Jerusalem Venture Partners, a venture capital fund; and SOSA, a corporate innovation specialist, among others Another $30 million is coming from the city. Its goal: to create 10,000 local cybersecurity jobs over the next decade as part of Mayor de Blasio’s New York Works Plan.

Two new cybersecurity centers in separate locations will work in tandem to anchor this project. In SoHo, a 50,000-square-foot cybersecurity investment hub will support cybersecurity start-ups in New York City. In Chelsea, the 15,000-square-foot Global Cyber Center will bring together investors, corporations and start-ups and serve as a virtual testing ground to run simulations. Both are expected to be completed before the end of 2019.

According to the New York City Economic Development Corporation, cybersecurity already is a $1 billion-plus industry in New York, with more than 100 companies and 6,000 employees as of 2017. 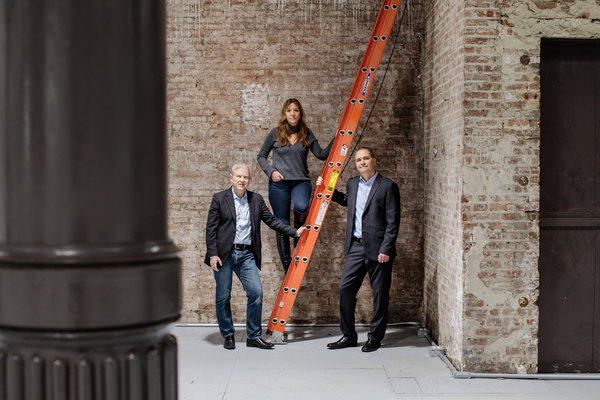 Those numbers are expected to grow as the city continues to attract new technology-related companies. The highest-profile is Amazon, which selected New York’s Long Island City as one of its East Coast headquarters. “We’re the logical place for this to be located,” Mr. Patchett said.

The real driver behind a project like Cyber NYC is the nation’s urgent need for improved cybersecurity at all levels of corporate and government operations. Nearly 60 million Americans have been affected by identity theft, according to a 2018 online survey by The Harris Poll, an increase from 15 million in 2017.

Cybersecurity attacks have become so common that experts worry about the onset of “cyberfatigue” as consumers begun to shrug off their impact. A corporate cyberattack takes place every 40 seconds via ransomware across the globe, reported Cybersecurity Ventures, a research specialist in the global cybereconomy. That figure is expected to be every 14 seconds by next year. Cybercrimes, Cybersecurity Ventures also noted, are predicted to cause $6 trillion in damages by 2021, an increase from $3 trillion in 2015.

Despite the clear need for cybersecurity upgrades and improvements, not everyone is convinced that a project like Cyber NYC is the right solution.

“This sounds like a huge marketing pitch,” said Bruce Schneier, a cybersecurity expert who has written 13 books on the topic. “I’ve worked in this field forever, and I’ve never even heard the term cybersecurity hub.” Such skepticism doesn’t really bother Erel Margalit, founder and chairman of Jerusalem Venture Partners, which is overseeing the creation of the cybersecurity investment hub in SoHo.

“Come and see what we already have done in Israel,” Mr. Margalit said, in response to Mr. Schneier’s skepticism. Jerusalem Venture Partners has raised over $1.3 billion to create and finance more than 130 companies — more than one-third of them in cybersecurity, including CyberArk, which is one of Israel’s largest cybersecurity companies (Israel is second to the U.S. in terms of overall investment in cybersecurity firms). “If someone wants to call this a marketing ploy, O.K. The storytelling part is important. When you tell people a story, they listen.”

Mr. Margalit, who as a former member of Israel’s legislative body, the Knesset, led its cybersecurity task force. Mr. Margalit earned his Ph.D. at Columbia and was living in New York City during 9/11. He says that his company will oversee much of the business end of the venture. “Most innovation occurs when the two disciplines meet: investors and cybersecurity experts,” he said.

Equally invested in Cyber NYC’s success is Uzi Scheffer, chief executive of SOSA, which has offices in Tel Aviv and New York. The company mostly focuses on protecting major financial companies from cyberattacks. While SOSA already has been operating out of another New York location for about 18 months, it is building the Global Cyber Center in Chelsea and plans to move into it in 2019.

“The Global Cyber Center will expose New York’s largest players to the best cybersecurity solutions out there,” said Mr. Scheffer.

Mr. Scheffer said a global cybersecurity hub doesn’t really exist anywhere yet. “It’s about seizing the opportunity rather than taking it away from someone else,” said Scheffer, whose firm, like Jerusalem Venture Partners, secured its partnership with Cyber NYC through a competitive bidding process.

There’s also a serious academic element to the overall cybersecurity partnership, which involves the participation of virtually every major academic institution in New York City. “Whether or not this leads to New York becoming the single, cybersecurity hub of the world is a story that will be played out over the next 15 years,” said Orin Herskowitz, senior vice president of Intellectual Property and Tech Transfer for Columbia University. In the meantime, he says, the combined efforts will train and link local university students with substantive cybersecurity jobs in NYC.

“There is a real chance this will become a catalytic event,” Mr. Herskowitz said.

There’s even a so-called Cybersecurity Boot Camp planned, where the city’s Fullstack Academy and CUNY LaGuardia Community College plan to educate and place more than 1,000 students in high-paying cybersecurity jobs over the first three years of the program. Program development for the boot camp has begun with the first session scheduled to take place in spring 2019.

Until now, all of the major cybersecurity stakeholders in New York City have been physically and operationally separated, said Satish Rao, associate director of physical sciences licensing at Columbia, who helps to support cybersecurity start-ups. But with Cyber NYC, he said, “a coalition of stakeholders is coming together.”

One such stakeholder is Mark Gazit, chief executive of ThetaRay, an Israeli financial cybersecurity specialty company, which opened a temporary New York office at another location 18 months ago, but will be ultimately be housed in the SoHo building early next year. ThetaRay will start with about 15 to 20 employees at the location, but plans to have more than 100 within several years, Gazit said.

“Few people come to a bank branch and use a gun to steal money,” he said. Today, the thief is far more likely to be behind a server in some remote country, stealing money without any physical access to the bank, he says. His company, which aims to prevent the spread of this cybercrime, works with such clients as General Electric.

To be a cybercriminal is the highest-paying, low-risk job in the world, Mr. Gazit said. “Nobody knows who you are, and you can disappear without a trace,” he says.

His and other cybersecurity companies hope to make New York City the center of halting cybercrime. There is no better location than New York, said Mr. Gazit, because New York is where the talent is and where the financial giants are headquartered.

Budget 2020: Here's everything we know so far about the upcoming Budget