Home » Business » Alibaba Had Another Big Singles Day. The Party May Not Last.

SHANGHAI — After 24 hours of frenzied buying and selling, and weeks of advertising and promotions before it, the Alibaba Group announced that its sales hit another titanic high on Singles Day, the Nov. 11 shopping festival that the Chinese e-commerce behemoth cooked up a decade ago.

This time, as China’s vast economy slows, the party was held with icebergs in sight from the deck.

At the stroke of midnight on Monday, Alibaba said it had racked up $30.8 billion in sales the day before, as measured by its own homegrown metric, gross merchandise value. That handily topped last year’s big number, $25.3 billion.

But all around China, gloom and uncertainty are the word.

Economic growth is slowing, and the country’s hundreds of millions of middle-class shoppers seem to be holding on more tightly to their pocketbooks. Tech companies are antsy about the government’s more interventionist attitude toward big business. The tariff fight with the United States is casting a pall not simply over trade, but over China’s future writ large. This month, Alibaba cut its sales forecast for the year ending in March by around 5 percent, citing the wobbly economy and the trade war.

Yang Sun, a 26-year-old from the northern city of Xi’an, said that the Singles Day discounts were no longer good enough to persuade her to wait all year to buy the things she wanted. Wang Xin, 24, an engineer in Shanghai, said he had rediscovered the joys of shopping offline.

“Singles Day just doesn’t hold that much appeal for me,” Mr. Wang said.

Asked about the current mood among Chinese consumers, Joseph C. Tsai, Alibaba’s executive vice chairman, told reporters on Sunday that Alibaba should be understood in the context of the epochal rise of China’s middle class.

“That trend is not going to stop, trade war or no trade war,” he said. “Any kind of short-term economic effects, we believe, will be cyclical.”

Alibaba is not like Amazon in that it is not a retailer. It merely provides the digital shelves and aisles for other merchants to sell their goods. But in its relentless ambition, Alibaba may be Amazon’s only global equal. Both companies want to fulfill their customers’ every desire and need.

Already, people order dinner on Alibaba’s takeout app, buy groceries from Alibaba’s supermarkets, watch movies produced by Alibaba, navigate with Alibaba’s smartphone maps and rent computing power from Alibaba’s servers. And the company still wants to do more. It recently opened an unmanned hotel. It is making its own computer chips. It wants to promote African economic development and end world hunger.

The business case for all this empire-building, Alibaba says, is that the company’s lakes of commercial data give it a leg up in anything that requires understanding customers or merchants.

But Wall Street is still waiting for results, and has grown skeptical in the meantime of the costs of expanding into new areas. Alibaba’s shares have lost nearly one-third their value since June.

Singles Day 2018 showed that Alibaba remains, if nothing else, China’s king of hype. During the broadcast event, the M.C.s periodically encouraged people watching at home to open up their phones and check out the great deals. As acrobats with Cirque du Soleil twirled in midair, the logo of Kukahome, a Chinese furniture maker, shone brightly behind them.

At one point, the performer Liu Wei rapped out the specs of a new model of Skoda sport utility vehicle. 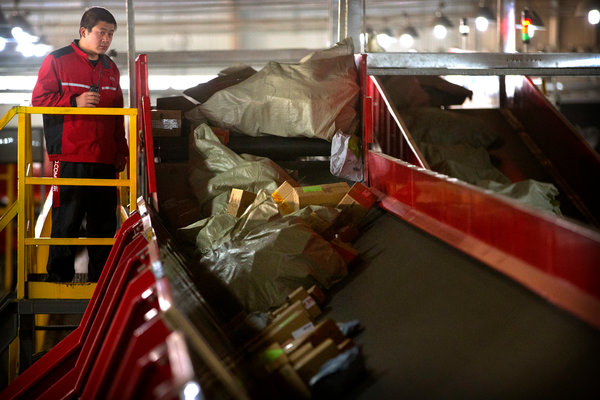 Anna Lin, a 25-year-old who works in finance in Shanghai, said she was feeling more lukewarm about the whole thing than in years past. Singles Day is now just one of many big shopping festivals each year, she said.

Plus, Ms. Lin said, the Singles Day promotions have become increasingly baroque. This year, there were coupons for specific items and brands, coupons that were available only at certain times of day, and coupons that appeared randomly and could be grabbed only by playing a game. Gathering friends into a team could help you collect even more coupons.

The comedian Papi Jiang captured the feeling in a video skit that went viral last year. In the sketch, Ms. Jiang tries to wade through a mess of convoluted Singles Day promotions. She scribbles formulas on heaps of paper and a blackboard. She dashes her phone to the floor multiple times. She tries to do the calculations on an abacus, before realizing that she doesn’t know how to use an abacus.

“My time is more valuable than that,” Ms. Lin said. “I honestly think all the math is a way to hide the fact that there isn’t much of a discount.”

Alibaba does not lack for other methods of subtle persuasion on Singles Day. If you had opened your Taobao shopping app on Sunday, you would have seen how your spending that day ranked against that of other people in your area.

The company’s methods for ginning up excitement have come under scrutiny before. Two years ago, Alibaba said that the United States Securities and Exchange Commission was investigating it for the way it reports Singles Day sales. The company’s preferred metric, gross merchandise value, is supposed to represent the amount of money that changes hands on its platforms. But there is no standardized way of calculating it.

The company has since de-emphasized the number. But the episode illustrated the way that Alibaba sees itself — as a company that breaks the mold.

Ever since Alibaba listed its shares in New York four years ago, the company has used a sense of manifest destiny to beguile investors, stock analysts and an eager news media. China was on the long road to middle-class prosperity, the company said, and Alibaba had the biggest tollbooth. A bet on Alibaba was a bet on China itself.

Last year, when the data firm CB Insights asked people to vote for the company they would invest in and hold for 10 years, Alibaba was the winner, beating out every American tech giant as well as Saudi Aramco and Goldman Sachs.

Now, though, it is clear that Alibaba’s privileged place in China’s rise is not guaranteed.

In takeout delivery, for instance, Alibaba is facing off against several wealthy rivals. It has made big bets that have struggled, including on the troubled bike-rental company Ofo.

Or consider Pinduoduo, an upstart e-commerce company that went from zero to 350 million customers in just three years. You may have not heard of the brands on the app, and you might not trust the quality of the goods. The prices, though, cannot be beat. Pinduoduo has won over shoppers in China’s smaller cities and towns.

No one expects Alibaba to generate whopper Singles Day sales growth numbers every year for eternity. At some point, when growth starts decelerating quickly, the event could change, to focus on one week’s sales instead of one day’s, or on something else entirely.

Alibaba’s track record suggests that when the time comes, it will have no trouble pulling off another act of conjuring.

“I’m not worried about Alibaba at all,” said Steven Zhu, an analyst in Shanghai with the research firm Pacific Epoch. “These guys are really good at creating things from nothing.”