Home » Business » An Accusation Blew Up a Campaign. The Media Didn’t Know What to Do.

Two days after coming in fifth in the election night count of votes for New York mayor last week, Scott Stringer was sitting in a high-polish diner in TriBeCa, drinking his second bottle of Sprite and trying to figure out what had happened.

He held up his iPhone to show me a text message he had received on Election Day from one of the progressive elected officials who had endorsed him and then dropped him after a woman accused him of sexually assaulting her more than 20 years ago. In the text was a photograph of the official’s ranked-choice ballot. Mr. Stringer was ranked first.

“This profile in courage,” he began, half laughing. “You can’t make this up. Who does that?”

Mr. Stringer, the 61-year-old New York City comptroller, isn’t the only one trying to puzzle out what happened over a few days in April in the campaign. Mr. Stringer, a geeky fixture in Manhattan politics, had been among the leading candidates when the woman, Jean Kim, accused him of touching her without her consent in the back of taxis. Suddenly he, the media covering him, his supporters and Ms. Kim were all reckoning with big questions of truth, doubt, politics and corroboration.

The allegations against Mr. Stringer did not divide a nation, as Christine Blasey Ford’s accusations against Brett Kavanaugh did. Nor did his candidacy carry the kind of high national stakes that came with Tara Reade’s allegations against Joseph R. Biden Jr. last spring. But maybe for those reasons, Ms. Kim’s claim that Mr. Stringer assaulted her when she worked on his New York City public advocate campaign in 2001 offers an opportunity to ask how journalists, political actors and, most important, voters are supposed to weigh claims like Ms. Kim’s. They also raise the question of how and whether to draw a line between those claims and the ones that helped ignite the #MeToo movement.

As much as the exposure of police brutality has been driven by cellphone video, the #MeToo movement was powered by investigative journalism, and courageous victims who chose to speak to reporters. The movement reached critical mass with articles by Jodi Kantor and Megan Twohey of The New York Times and Ronan Farrow of The New Yorker on the movie producer Harvey Weinstein, which the Pulitzer Prize committee described as “explosive” revelations of “long-suppressed allegations of coercion, brutality and victim silencing.” Those stories and other notable sets of revelations — about the financier Jeffrey Epstein, the sports doctor Larry Nassar, the singer R. Kelly, the comedian Bill Cosby — drew power from rigorous reporting that helped develop new standards for covering what had long been dismissed as “he said, she said.”

Crucially, reporters honed the craft of corroboration, showing that an accuser had told a friend, a relative or a therapist at the time of the episode and that the accuser wasn’t simply relying on old memories. The reporters also looked for evidence that the accuser’s account was part of a pattern, ruling out a single misunderstanding.

Those technical aspects of the stories weren’t always widely understood. But the landmark investigations were, even in this divided moment, unifying. There was no serious partisan division over any of those men’s guilt because the journalistic evidence was simply so overwhelming. But not every allegation — and not every true allegation — can meet that standard. Not every victim is able to talk about it immediately; not every bad act is part of a pattern.

In the case of Mr. Stringer and Ms. Kim, observers were left simply with his claim their relationship was consensual, and hers that it wasn’t. Ms. Kim’s lawyer had circulated a news release, which didn’t mention Ms. Kim, to reporters the evening of April 27.

At her news conference on April 28, Patricia Pastor, Ms. Kim’s lawyer, read a statement based on Ms. Kim’s recollection, which didn’t include contemporaneous corroboration, which Ms. Kim said didn’t exist, or a suggestion of a pattern. And the lawyer angled the statement for maximum impact: The statement referred to Ms. Kim, for instance, as an “intern,” when she had been a 30-year-old volunteer. And Ms. Pastor claimed, incorrectly, that Ms. Kim had been introduced to Mr. Stringer by Eric Schneiderman, who was forced to resign as New York’s attorney general in 2018 after a report that he had physically abused at least four women.

Mr. Stringer said he had a passing, consensual relationship with Ms. Kim and was stunned by her claims that they had never had a relationship. But he said that he understood why the media picked up the story, even if it hadn’t been corroborated.

“Running for mayor, every part of your life is an open book,” he said. “I didn’t begrudge anybody, including The Times, from writing about the charge. That would be silly.”

And victims, of course, have no obligation to tell their stories through skeptical journalists. Ms. Pastor pointed out in an interview that “once the story was out, you still have time” to report it out and check the facts, and said she and her client didn’t object to that fact-checking. The Times’s Katie Glueck did that on May 9 and found Ms. Kim and Mr. Stringer telling very different stories in the absence of definitive evidence. 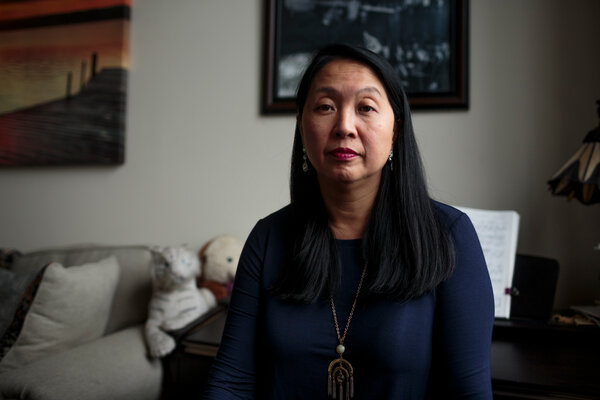 But by then, the story had jumped out of journalists’ hands and into politicians’. Mr. Stringer had painstakingly assembled a coalition of young progressives, including a cadre of state senators who had partly defined their careers by pressing to extend the statute of limitations in cases of child sexual abuse and telling their own harrowing stories. In a video call the day after Ms. Kim’s news conference, they pressed Mr. Stringer to issue a statement suggesting he and Ms. Kim might have perceived their interaction differently.

When he refused, and flatly denied the allegation, 10 progressive officials withdrew their endorsement.

That decision got journalists off the hook. Most were covering a simple, political story now — a collapsing campaign — and not weighing or investigating a complex #MeToo allegation.

The progressive website The Intercept (which had exposed a trumped-up sexual misconduct claim against a gay Democrat in Massachusetts last year) also looked into Ms. Kim’s accusations, calling former Stringer campaign aides, and found that a series of widely reported details from Ms. Pastor’s statement — though not Ms. Kim’s core allegations — were inaccurate. A longtime New York political hand who had known both Mr. Stringer and Ms. Kim at the time, Mike McGuire, also told me he’d been waiting to talk on the record about what he saw as factual errors in Ms. Kim’s lawyer’s account, but that I was only the second reporter to call him, after Ms. Glueck. Ms. Kim, meanwhile, had been open about her motives — she wanted voters to know about the allegation.

It’s easy to blame the relative lack of curiosity about the underlying story on the cliché of a hollowed-out local press corps, but that’s not really true in this case. The New York mayor’s race received rich and often ambitious coverage, as good and varied as I’ve seen at least since 2001, often from newer outlets like Politico and The City. The winner of the vote’s first round, Eric Adams, saw reporters investigate his donors and peer into his refrigerator.

In an article in Columbia Journalism Review, Andrea Gabor examined coverage of the race and found that the allegations had prompted news organizations to stop covering Mr. Stringer as a top-tier candidate. She suggested that reporters “recalibrate the judgments they make on how to cover candidates such as Stringer in their wake.”

In May, Mr. Stringer’s aides told me they were in talks with some former endorsers to return, as well as with the progressive movement’s biggest star, Alexandria Ocasio-Cortez, when they learned of an allegation from another woman: that some 30 years ago, Mr. Stringer had sexually harassed her when she worked for him at a bar. The Times reported the account of the second woman, Teresa Logan, with corroboration. The next day, Ms. Ocasio-Cortez endorsed Maya Wiley, who came in second after the in-person voting ended. She said that time was running out and that progressives had to unite, a suggestion that the second allegation had made up her mind.

But when you get beyond the reporters gaming out winners and losers, and beyond politicians weighing endorsements, here’s the strange thing: It’s not clear there’s anything like a consensus among voters on how the decades-old allegations should have affected Mr. Stringer’s support. Gov. Andrew Cuomo of New York, for instance, has weathered far more recent claims from his own aides. And even two of the legislators who dropped their support of Mr. Stringer told me they were still wrestling with the decision and their roles and that of the media. Ms. Ocasio-Cortez seemed to signal a similar concern when, on Election Day, she revealed that she had ranked Mr. Stringer second on her ballot.

State Senator Alessandra Biaggi said that the moment had been “incredibly painful” but that she’d begun to feel that “my integrity was being compromised” by staying with Mr. Stringer. She also said that if she were a New York City voter, she would have ranked Mr. Stringer among her top choices, and wished there was space for more nuance in public conversations about sexual misconduct allegations.

Yuh-Line Niou, a state assemblywoman from Manhattan, told me she thought the media had unfairly “put a lot of pressure on women who are survivors to speak up,” an experience that had been “scary and in a lot of ways violent.” She said she would have backed Mr. Stringer if he’d acknowledged that he’d harmed Ms. Kim, and added that his denial revealed that he had come from “a time when people don’t talk about what it is to be human, that you have to be perfect somehow.”

“I ranked him, of course,” she said. “We didn’t have many choices.”

Ms. Kim’s lawyer, Ms. Pastor, said she’d been perplexed by the pained progressives. “You ought to stick to your guns,” she said.

It can be hard to separate the entangled roles of media and political actors.

“The same way it’s obvious that the media didn’t make Adams rise, it should be obvious that the media didn’t make Stringer fall,” the Daily News columnist and Daily Beast senior editor Harry Siegel told me. “The decision by his lefty endorsers to almost immediately walk away, and before the press had time to vet Kim’s claim, did that. Understanding that the press — and media columnists! — like to center themselves, this is a story about the Democratic Party and its factions more than it’s one about his coverage.”

Mr. Stringer said that he was resolved not to relive the campaign, but that he was worried about a progressive movement setting a standard that it can’t meet.

“When I think about the future, there’s a lot of progressives who under these scenarios can’t run for office,” he said.

Before he headed back out onto Church Street, I asked him what he was going to do next.

“Probably just run for governor,” he said, at least half seriously.