Home » Business » As Trump Reels, Fox News Has a Message for Viewers: Stick With Us

His president reeling, his cable network at a crossroads, Tucker Carlson began his show on Thursday night asking a question that has echoed for weeks among anchors and producers at Fox News: “What is life going to be like for us on Jan. 21?”

“Who has got your concerns top of mind? Who wakes up in the middle of the night worried about your family?” Mr. Carlson asked his flock, acknowledging that Mr. Trump would be gone in two weeks “and we cannot change it.”

The imminent end of the Trump presidency has presented a challenge to the enormously popular, enormously profitable Fox News — the crown jewel of Rupert Murdoch’s American empire — whose right-wing stars yoked themselves to Mr. Trump more tightly than any other mainstream pundits over the past four years.

Prime-time hosts like Mr. Carlson and Sean Hannity spoke darkly of possible voter fraud and irregularities. But privately, senior figures at the network acknowledged a struggle to thread the needle between the president’s bogus (and possibly defamatory) fraud claims, and the demands of an audience that was increasingly confused at the discrepancies between Mr. Trump’s lies and the reporting on Fox News, which declared Joseph R. Biden Jr. the president-elect on Nov. 7.

Executives at Fox News are unfazed by the lamentations of liberal critics, but the defection of conservative viewers to fringier pro-Trump outlets like Newsmax was more concerning. The prospect of Trump TV, a rival media venture led by the president himself, also loomed.

Now, in the wake of violence at the Capitol and Mr. Trump’s increasing isolation within his own party, Fox News is finding a path forward: sympathize with the grievances of a Trump-adoring audience that has finally acknowledged its tribune has fallen. Become a MAGA safe space.

“Tens of millions of Americans have no chance; they’re about to be crushed by the ascendant left,” Mr. Carlson claimed. “These people need a defender. You need a defender.” It was not hard to deduce whom he had in mind.

Anyone expecting an about-face from Fox News — or an apology, as some liberals might daydream — has not studied its history or that of its owner, Mr. Murdoch, whose ability to adapt to political change is matched only by his reluctance to kowtow to critics.

With Democrats set to take power in Washington, Fox News’s pundits are trotting out the old hits. On his Friday program, which aired shortly after Twitter announced that it had banned the president from its platform, Mr. Hannity promised, rather generically, to “expose what is breathtaking hypocrisy of Democrats and the media mob.” He went on to attack familiar Fox News villains like the Clintons, the Obamas, Madonna and the comedian Kathy Griffin. It could have been a rerun from 2014. (Mr. Hannity, in fact, had pretaped his 9 p.m. show a few hours earlier.)

Mr. Carlson, who was live on Friday, seized on the news that Twitter had closed Mr. Trump’s account, warning his viewers that “the crackdown of America’s civil liberties is coming” and portraying liberals as hellbent on silencing conservative views. But he uttered the word “Trump” only twice over the entire hour. 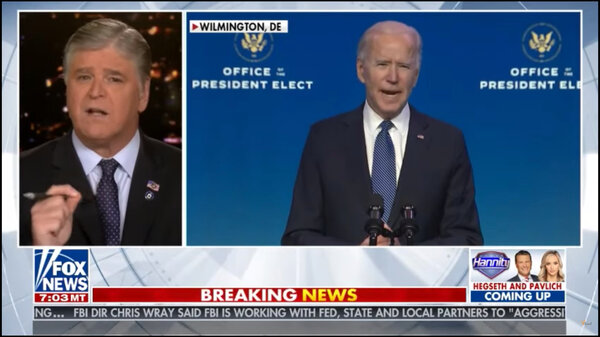 It took a moment for Fox News’s hosts to recalibrate after the shocking and violent events of the week.

Several network stars, notably the anchor Laura Ingraham and the political analyst Brit Hume, spread a baseless theory that left-wing activists — not Trump supporters — were responsible for the violence at the Capitol. (Ms. Ingraham later tweeted a debunking of the theory.) A guest on Mr. Carlson’s Wednesday show made the same unfounded claim about antifa infiltration, with no pushback from the host. And the news anchor Martha MacCallum initially compared the siege at the heart of American democracy to a minor incident of graffiti at a Republican senator’s house.

By Thursday, amid a flurry of White House resignations and a rising chorus of Republicans declaring that it was time for Mr. Trump to go, there were cracks in the firmament. “To put up a Trump flag and take down the American flag is not patriotic — it was one of the worst things I’ve ever seen,” Brian Kilmeade said on “Fox & Friends.” The false rumors about antifa involvement were dialed back, and hosts criticized the Washington violence.

Still, no Fox News prime-time star has yet blamed Mr. Trump for his role in inciting the riot at the Capitol. And rather than reckon with years of backing Mr. Trump and giving comfort to his supporters, the network’s commentators have simply swiveled, finding new ways to take on old targets. In the Fox News universe, Mr. Biden is now a socialist prepared to upend the American way of life. And many hosts have drawn a direct equivalence between the storming of the Capitol by an anti-democratic mob and the Black Lives Matters protests over the summer in support of racial justice.

As repulsive as such rhetoric may be to liberals, it is part of a formula that has rarely failed Fox News, which remains the profit engine of Mr. Murdoch’s Fox Corporation.

The network’s ratings fell after Election Day, and it has lost badly to CNN in the ratings since the riot at the Capitol. But in 2020 as a whole, Fox News was the third-most-watched network in the country in prime-time on weekdays. That was not just cable news; it was all of television. Only CBS and NBC ranked higher.

Fox News’s biggest stars, meanwhile, are staying put. Ms. Ingraham revealed a new multiyear contract in December, and Mr. Carlson and Mr. Hannity are also on long-term deals, according to a person with knowledge of the network’s inner workings. For all of the hype over Newsmax, its ratings have fallen back from postelection highs.

And if Mr. Murdoch ever feels the need to distance himself more formally from Mr. Trump, he has other platforms on which to do so. In November, another Murdoch organ, The New York Post, proclaimed Mr. Biden’s victory in a cheery front page. After this week’s Capitol riots, the Murdoch-owned Wall Street Journal made a case for Mr. Trump to resign.

Mr. Murdoch and his son Lachlan, who is the executive chairman of the Fox Corporation, had no comment, a representative said.

Trump TV, which could have posed a significant challenge for Fox News in 2021, now appears less of a threat. Industry experts say the reputational damage that Mr. Trump sustained in the wake of the riots — and his abandonment by allies and donors — has severely hurt his ability to get a viable Fox News competitor off the ground.

“This has not been a positive note,” said Christopher Ruddy, a confidant of Mr. Trump and the chief executive of Newsmax.

Starting a new network requires approval from cable distributors like Charter Communications and Comcast (which Mr. Trump has gleefully denounced as “Concast”), corporations that could face intense public pressure not to associate with Mr. Trump after his presidency.

Even digital news outlets, like the websites created by the former Fox News stars Bill O’Reilly and Glenn Beck, need help from mainstream tech companies that may now balk at any association with the Trump brand.

“The prospects are now greatly diminished,” said Christopher Balfe, a conservative media consultant who has built digital platforms for stars like Mr. Beck and Megyn Kelly. “You’ve got a real distribution problem. And now that Facebook and Twitter have taken action, they’ve opened the door to a broader de-platforming.”

As for a traditional TV network, Mr. Balfe said cable carriers “weren’t interested before Nov. 6, and they’re certainly not interested in taking anything from him after Jan. 6.”

Still, some television veterans say that Mr. Trump’s millions of supporters could sustain a media outlet regardless of corporate qualms.

“There will always be some entity that’s willing to make a buck by hosting their service,” said Jonathan Klein, a former president of CNN.

Mr. Klein pointed out that Comcast and other cable distributors carry Newsmax and One America News “despite the fictions they’ve been perpetrating.” He added, regretfully, that the violent events at the Capitol could even function as a launchpad for a niche media outlet catering to an audience eager to hear more from Mr. Trump.

“He might have thought of it,” Mr. Klein said, “as his greatest kickoff event.”