Home » Business » China and trade: Breaking up is hard to do

There’s an old adage in Asian business circles: when China sneezes, Asia catches a cold. So imagine what happens during a pandemic.

When China locked down, supply chains around the region were hit and companies couldn’t get access to raw materials and products.

Nothing escaped the reach of the coronavirus crisis, not even the tiniest artefact, as speciality crafts studio Royal Insignia found out.

For decades, the fine craft studio has made medals and jewellery for the who’s who in South East Asian royalty.

But coronavirus closed down borders and that meant the company couldn’t meet customer orders.

Royal Insignia sources its precious metals from Italy and its gift boxes from China.

General manager Lin Yiqun says it was a double whammy – lockdowns in both countries meant the company couldn’t get any of its supplies.

“The important lesson for us to learn here was you need to have an alternate source for supply chains,” he said. 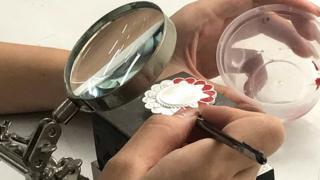 “If this thing is going to hit us again, how do we respond to that? For packaging materials, we definitely are looking at other suppliers.”

Although Royal Insignia has invested in automation, most of its precious products are made painstakingly by hand.

It only keeps just the right amount of raw materials for production, meaning it didn’t have extra stock lying around.

For Royal Insignia and other companies around the world, the pandemic caused a massive disruption in global trade. It was a huge wake-up call.

It taught them a valuable lesson that depending on one country all the time for everything is bad for business.

That lesson is starting to have a real-world impact.

A recent survey by supply chain management firm QIMA showed that 95% of US companies questioned said they would diversify suppliers both in and out of China.

But even with the pandemic and the continuing trade war between the US and China, a complete break is tough.

Some 87% of the companies surveyed still said the mainland is one of their top three sourcing destinations.

It is not just US firms having that realisation, and neither is it just because of how deep the supply chains are in China.

“China responded to the virus in a different manner to how other countries responded,” said Steven Lynch, chief executive of the British Chamber of Commerce in China.”The one thing they did was reassure and gave businesses confidence to reopen.”

He said: “Companies who have supply chains and manufacturing operations here, [China] very quickly gave tax incentives and support to businesses to reassure them of their investments.”

Meanwhile, China’s appetite for high-tech goods is growing when other countries are cutting back.

For Taiwanese firm Advantech, which makes industrial computers, China makes up almost a quarter of its business.

Advantech founder Chaney Ho said China was its second-biggest market: “From a business point of view, we cannot just give up this market.”

“This is not just good for Advantech, but also for a lot of other European companies too.”

China has gone from being the world’s supplier to also becoming one of the world’s most important customers.

It’s the only economy that’s likely to grow this year.

Global trade has been defined by China in the last few decades – and that’s not going to change any time soon.

Why should SMEs go digital?