A renewed stock market slump is being challenged by new central bank intervention as business activity across the Western world winds down because of coronavirus.

There were widespread losses across Asia overnight and in morning trading across Europe linked to the COVID-19 outbreak.

Chief among the worries is the shut down of normal life as we know it, given the withdrawal of everyday services such as flights, bars, restaurants and shops – with McDonald’s among the latest chains to announce closure plans.

In addition to the efforts to fight the virus, there were also investor concerns for a near $2trn package of support for the US economy planned by Donald Trump’s White House.

Nerves grew after the Senate rejected the package on the grounds it was too corporate heavy – with not enough for individuals.

But early losses – of up to 5% – on the FTSE 100 eased on claims by America’s treasury secretary that a deal was “very close” and news of further stimulus from the US central bank. 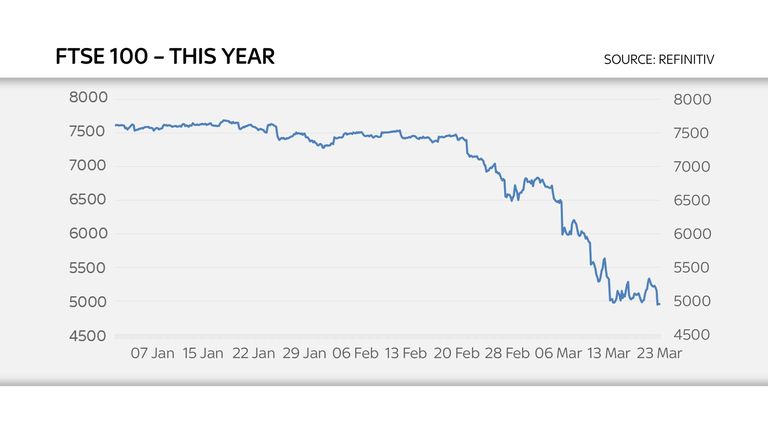 The US Dow Jones opened around 3% lower despite the Federal Reserve announcement, which included up to $300bn of lending to businesses and the purchase of more Treasuries “in the amounts needed”, to support activity and offset the “tremendous hardship” caused by coronavirus.