Good Monday. (Want this by email? Sign up here.)

A best-selling Boeing airplane is grounded

The future of Boeing’s 737 Max 8 plane is in question after an Ethiopian Airlines flight crashed yesterday, killing 157 people.

The Ethiopian Airlines flight was the second disaster involving the jet in five months, after a Lion Air crash in Indonesia killed 189 people in October. It’s rare for two planes of the same model to be involved in accidents in such a short time span, the NYT reports.

The 737 Max is core to Boeing’s business. It’s the company’s best-selling model (list price: $120 million). Since its introduction in 2017, 350 planes have been delivered, and 5,000 more are currently on order. Chris Bryant of Bloomberg Opinion notes that its success is why Boeing shares are near a record high — though shares were down sharply in premarket trading.

China and Indonesia have grounded the Max 8 jets. China’s airlines had been enthusiastic customers of the new model, but as of this morning they’ve been flying 737-800s instead.

Concerns may give rivals a leg up. The 737 Max was created to counter Airbus’s latest A320 variant. Meanwhile, the Chinese plane maker Comac has been testing the C919, a rival of those jets, and has hoped to find buyers beyond China.

Undeterred by a recent loss to Democrats, President Trump is expected to ask for $8.6 billion to finance a border wall in the next White House budget, which is to be sent to Congress today.

• The proposal also includes $3.6 billion to replenish military construction funds that were diverted under a national emergency declaration.

• “I would just say that the whole issue of the wall and border security is of paramount importance,” said Larry Kudlow, the president’s top economic adviser.

• Democrats rebuffed the proposal. “Congress refused to fund his wall, and he was forced to admit defeat,” Speaker Nancy Pelosi and Senator Chuck Schumer said in a joint statement. “The same thing will repeat itself if he tries this again.”

The request is largely for show. As the NYT notes, the White House budget “will serve more as a statement of values and a vehicle for political positioning than a plausible outline for how the government will actually raise and spend money.”

Don’t expect the budget to be balanced, regardless of whether the wall funding is included. 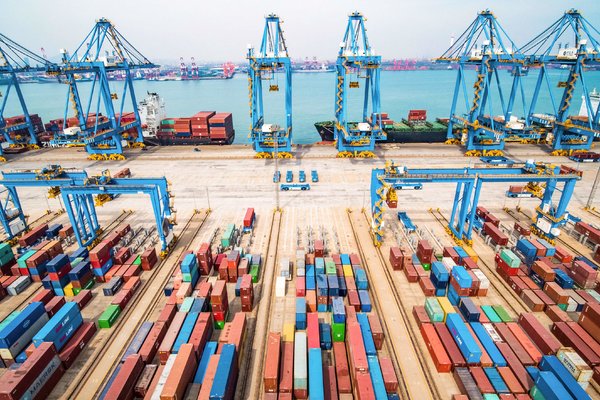 Would a trade deal with China have too much compromise?

In a push to strike a trade deal, the U.S. may be at risk of signing a watered-down agreement.

A potential compromise could enable a deal to be reached this spring, Keith Bradsher and Ana Swanson write.

• Washington has been pushing Beijing to agree to a so-called enforcement mechanism that would allow the U.S. to monitor China’s behavior and impose penalties for violations.

• Wang Shouwen, China’s vice minister of commerce for international trade negotiations, said on Saturday that China would be amenable to an agreement that gave each side an equal right to take trade actions.

But China’s promises not to manipulate its currency don’t seem to be particularly original, Mr. Bradsher writes:

• American negotiators want China to avoid devaluing its currency to achieve a competitive advantage for their exports.

• But “currency provisions of the evolving trade agreement are essentially a reaffirmation of the statement that the G-20 economies, including China, issued” in 2016.

The bigger picture is a growing concern that, as the NYT Editorial Board points out, the Trump administration “may settle for an ephemeral victory at the expense of America’s long-term economic interests.”

A big week for Brexit

Tomorrow, the British Parliament is to vote on Prime Minister Theresa May’s deal for leaving the E.U. Right now, its chances for approval don’t look good.

Talks between Britain and Brussels are deadlocked, according to Mrs. May’s office. Negotiators have been trying to secure last-minute changes to win over British lawmakers, after a previous version of the agreement was overwhelmingly rejected by Parliament.

Some hard-line Brexiters say defeat is “inevitable.” And a former Brexit secretary, David Davis, has said that even a proposal for Mrs. May to step down in exchange for support of her deal would “not get the vote through.”

Meanwhile, those who want to stay in the E.U. have “wind in the sails,” according to the British foreign secretary, Jeremy Hunt, who said over the weekend that there is a real risk of “losing Brexit.” If Mrs. May’s deal is rejected, lawmakers would vote on whether to reject a no-deal Brexit and delay the withdrawal process. That could increase the chances of a second referendum.

More: Brexit has reportedly spurred financial firms to move $1.2 trillion in assets and funds out of Britain. And the Bank of England has told some British lenders to triple holdings of easy-to-sell assets to weather a no-deal Brexit.

The Fed chairman gave a rare interview to “60 Minutes” about the economy, future interest rate increases — and whether President Trump could dismiss him.

On job security: Here’s the exchange between Mr. Powell and Scott Pelley of “60 Minutes”:

Pelley: Can the president fire you?

Powell: Well, the law is clear that I have a four-year term. And I fully intend to serve it.

Pelley: So no, in your view?

On the U.S. economy: Mr. Powell said that America was in “a good place,” with a favorable outlook on inflation. The Fed’s interest rate policy, he added, is “appropriate.” (Translation: Don’t be surprised if the Fed keeps rates steady until it has a better idea of the outlook for the year.)

On the global economy: Mr. Powell feels more concerned, telling Mr. Pelley, “We’ve seen increasing evidence of the global economy slowing down.” The biggest potential shocks to the U.S., the Fed chairman said, could come from slower growth in China and Europe, as well as Brexit.

More: How central bankers around the world are taking cues from the Fed by reducing interest rate increases to cushion slowing economies.

We’re now a decade into one of the great rallies in stock market history, which has seen the S&P 500 surge 305 percent and the creation of $30 trillion in wealth. Matt Phillips tried to explain why most Americans are subdued after the latest rally:

• “To buy stocks, you need money. After watching their fortunes — and retirement funds — shrivel, few Americans were in a position to take a fresh flier on beaten-down stocks.”

• “Even those who are invested are behaving differently, both in how they invest and what they’re doing with the proceeds.”

• “In 2017, 43 percent of all the money in American stock market funds was in index funds. Back in 2007, only 19 percent of stock market assets were in these passive strategies, a style of investing that acknowledges that, for most people, trying to beat the market through savvy trading is a mug’s game.”

• “The psychological and financial damage inflicted by the 2008 financial crisis and the ensuing Great Recession continue to weigh heavily.”

• Research suggests that “enduring financial traumas at a relatively young age can shape people’s behavior for decades.” That could mean that younger Americans “are unlikely to be eager to take big risks in the stock market any time soon.”

A year ago, Twitter’s C.E.O., Jack Dorsey, said that he wanted the company to make the conversations on its platform healthier. Kurt Wagner of Recode finds that the effort is failing.

• “There’s no widely adopted way to quantify the health of human interaction, especially at the internet’s scale.” But the measures that Twitter and researchers are considering include a “toxicity” metric and one that takes note of civility, receptivity and constructivity, helped by researchers from Oxford and Leiden Universities.

• “The research teams that Twitter announced last July to help them work on this project haven’t even started. One of the two teams has abandoned the project altogether. Internal metrics Twitter is building on its own are still in the ‘experimentation’ phase and aren’t being tested in the wild.”

• “Lawyers for Twitter and Leiden haven’t been able to solidify the data-sharing and privacy details for the partnership, which means the researchers are simply waiting.”

In an op-ed for the FT, Christine Lagarde, the managing director of the I.M.F., writes that it’s time to overhaul international corporate tax rules:

• “The ease with which multinationals seem able to avoid tax and the three-decade-long decline in corporate tax rates compromise faith in the fairness of the international system.”

• One solution, she says, is to create minimum-tax schemes. “Reduce the scope for shifting profits to low-tax locations,” she suggests, or “allow low-income countries to retain more revenue by imposing minimum withholding taxes on cross-border payments.”

• Another is to “create a system that fully taxes routine profits — something like a normal return on investment — on basic activities in the country in which they take place, while splitting any remaining profits among all the relevant nations.”

Sam Altman stepped down as president of Y Combinator, but remains chairman of the start-up incubator.

Bank of America named James Robertson and Peter Luck as co-heads of investment banking for Britain.

Nvidia agreed to buy the chip maker Mellanox for about $7 billion. (CNBC)

Deutsche Bank’s C.E.O., Christian Sewing, is said to have dropped his opposition to a possible merger with Commerzbank. (FT)

The talent agency Endeavor unwound a $400 million investment from Saudi Arabia after receiving financial help from other investors. (NYT)

The White House reportedly plans to issue executive orders on issues with bipartisan appeal, including drug pricing and the opioid epidemic. (Axios)

A poll found that the company most popular with Democrats was Kraft Heinz, while for Republicans it was Chick-fil-A — and for independents, it was Amazon. (Axios)

The U.S. worries that Germany’s new gas pipeline will make the country too reliant on Russia. (WSJ)

The U.N. says North Korea has been undermining sanctions meant to pressure it into giving up nuclear weapons. (WSJ)

Elizabeth Warren has vowed to break up big tech companies, and Amy Klobuchar has argued that companies that make money off user data should perhaps pay more in taxes. (FT, Verge)

Tesla says it will have to raise the price of its Model S and X vehicles about 3 percent to keep more stores open and still sell the $35,000 version of its Model 3. (Tesla)

The Trump administration wants to use social media to help identify people who are receiving federal disability benefits without being truly disabled. (NYT)

Qatar reportedly offered $400 million to FIFA just three weeks before the nation was named host of the 2022 World Cup. (Times of London)

Wells Fargo says that its culture has changed in light of numerous scandals, but employees disagree. (NYT)

What will a contempt hearing mean for Elon Musk? Also, Tesla investors are suing the company to stop Mr. Musk from tweeting. (DealBook, Fortune)

Female bankers have criticized UBS over the way it cuts bonus payments after maternity leave. (FT)

Thanks for reading! We’ll see you tomorrow.