Good Tuesday morning. (Was this email forwarded to you? Sign up here.)

President Trump says his trade fight with Beijing is hurting China’s economy while generating billions of dollars for the U.S. That’s not entirely true.

“Tariffs are undeniably hurting China, where exports power about 20 percent of the economy, compared with 12 percent in the United States,” Ana Swanson and Jim Tankersley of the NYT write. “On Monday, the Chinese government said its economy had grown at a 6.2 percent annual rate in the second quarter, the lowest rate in 27 years.”

But there is little sign that China’s loss is America’s gain. Business activity that is shifting from China is largely headed to “other low-cost countries, like Vietnam, with a transition cost attached for American companies that depend on them.” And income from tariffs is more than offset by costs:

• The U.S. has raised $20.8 billion from tariffs on $250 billion worth of Chinese goods through last Wednesday, according to data from Customs and Border Protection.

• But Mr. Trump has already committed to paying $28 billion in subsidies to American farmers hurt by the trade war. And numerous studies have shown that U.S. consumers are bearing costs from the tariffs.

“The longer Mr. Trump’s dispute with China drags on, the more difficult it could be for him to ignore that gap,” Ms. Swanson and Mr. Tankersley write. 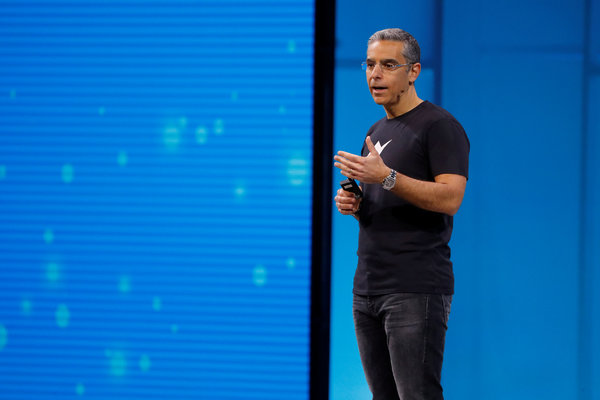 Facebook will have to wait to roll out Libra

This morning, David Marcus, the Facebook executive leading the company’s cryptocurrency project, Libra, will testify before the Senate Banking Committee. With vocal skepticism emerging from across the Capitol, expect the gist of the hearing to be: This tech will be a long time coming.

“They’ve got a lot of work to do to convince us” that the technology will be safe, Treasury Secretary Steven Mnuchin said yesterday. He said that regulators had met several times with Facebook about Libra, but that more detail was required before the company allayed fears about the currency’s potential to become a national security threat.

Some lawmakers feel even more strongly. Some Democrats want Facebook to suspend work on Libra until they’re comfortable with the technology. And Representative Maxine Waters, the Democratic chairwoman of the House Financial Services Committee, has reportedly drafted legislation that would block large tech companies like Facebook from the world of digital finance.

Facebook appears resigned for a long wait. In his prepared testimony for the Senate hearing, Mr. Marcus said that Libra wouldn’t launch until the company had “fully addressed regulatory concerns.” He added that Facebook recognized “the authority of financial regulators” and supported their “oversight of this project.”

But it could find itself in a political tug of war. As the FT notes, lawmakers will want strict compliance with rules against money laundering, but they’re also deeply concerned about Facebook or a subsidiary collecting user data — and it’s not easy to reconcile the two.

You can watch the hearing at 10 a.m. Eastern.

Jeffrey Epstein isn’t a billionaire (but he is very rich)

The financier accused of abusing dozens of underage girls had often been described as a billionaire. But in court documents unsealed yesterday, Mr. Epstein disclosed assets worth about $560 million — which prosecutors say is still big enough to justify denying him bail.

• $195 million in holdings in hedge funds and private equity funds

• A Manhattan townhouse valued at nearly $56 million, a New Mexico ranch worth about $17 million and two Caribbean islands appraised at $86 million

• A fake passport with Mr. Epstein’s photo claiming that the holder resided in Saudi Arabia

That wealth makes Mr. Epstein a flight risk, prosecutors say. The financier’s lawyers said their client should be granted $100 million bail. But the government’s argument was bolstered by two women who said they had been victimized by Mr. Epstein, one of whom said, “He’s a scary person to have walking the streets.”

The document wasn’t a full accounting of Mr. Epstein’s wealth, the presiding judge, Richard Berman of the Southern District of N.Y., said in court. He will decide whether to release Mr. Epstein on bail on Thursday.

More: A close look at Ghislane Maxwell, Mr. Epstein’s close confidant. Les Wexner, Mr. Epstein’s best-known client, said he was never aware of any illegal activity by the financier. And Ehud Barak, the former prime minister of Israel, said that he had never seen any girls during his visits to Mr. Epstein’s island.

Law firms have been poaching talent from one another recently, including Kirkland & Ellis hiring a specialist from Freshfields, Vinson & Elkins stealing away a partner from Covington & Burling, and Linklaters taking an expert from Skadden.

Behind the moves is a new law that requires national-security exams for some deals. The Foreign Investment Risk Review Modernization Act mandates that investments by foreign companies in two dozen sectors must be reviewed by an interagency panel, known as Cfius.

And then there’s President Trump. His decision last year to block Broadcom’s $117 billion takeover bid for Qualcomm on national security grounds pushed the issue to the top of the deal-making agenda.

Reviews by Cfius rose almost threefold between 2009 and 2016, according to the FT. Acquisitions by Chinese companies were among the most heavily scrutinized.

“The time of very relaxed government scrutiny of investment flows are over for the foreseeable future,” Aimen Mir, a former senior Cfius official who joined the law firm Freshfields this year, told the FT.

The Massachusetts senator has made fighting huge corporations one of the key messages of her Democratic presidential campaign. But Annie Linskey of the WaPo looks at Ms. Warren’s record as a legal adviser on corporate bankruptcies, where she often helped companies cap their legal liabilities.

• “In many cases, she was hired to argue motions, swooping in to offer her analysis and persuade a judge with her knowledge of bankruptcy law,” Ms. Linskey writes.

• Ms. Warren consulted for about a dozen companies, including Fairchild Aircraft, where she argued that the company should be shielded from liability for a fatal plane crash.

• She worked for Dow Chemical when a bankrupt affiliate, Dow Corning, faced lawsuits from women who said they had gotten sick from its breast implants. Dow Chemical wanted to protect itself from liability, and Dow Corning sought to limit payouts to those women.

• A lawyer for plaintiffs in the case said Dow Corning had resisted making extra payments that were promised to the women. “She was on the wrong side of the table,” Sybil Goldrich, who co-founded a support group for women with implants, told Ms. Linskey.

• A spokeswoman for Ms. Warren’s campaign said that it was possible to reconcile the senator’s legal work and her current campaign message.

Senior executives at the ride-hailing company are being encouraged to make their workplace more inclusive in perhaps the most basic way possible: financial incentives, the FT reports.

• “The diversity-related bonus policy was put into place this year.”

• “It calls for Uber to increase the number of women in managerial roles and above to 35 percent by 2022 and to raise the percentage of under-represented employees at mid-level and above to 14 percent in the same timeframe.”

• “The company did not disclose the current levels.”

It’s not clear how much of the bonus is contingent on hitting the targets. A spokesman told the FT that it was a “significant” portion, and that the targets were one of a “limited number” of metrics used to calculate payouts to top executives, including the company’s C.E.O., Dara Khosrowshahi.

The policy emerged out of Uber’s troubled days. It was one of the recommendations of a report led by Eric Holder, the former attorney general. Uber had commissioned the inquiry after the departure of Travis Kalanick, which was driven in part by the toxic culture inside the company.

Meredith Whittaker, the Google employee who led protests against the company’s A.I. work for the Pentagon, is leaving.

Scott Minerd, the chief investment officer of Guggenheim Partners, said he had been approached about joining the Fed’s board of governors.

Santander reportedly offered to pay Andrea Orcel 52 million euros, or $58 million, to be its C.E.O. — before rescinding the job offer, citing compensation costs.

• Broadcom’s effort to buy Symantec has stalled over a disagreement on price. (DealBook)

• Anheuser-Busch InBev may need to sell more of its assets after being forced to cancel the I.P.O. of its Asia Pacific business. (Bloomberg)

• CBS and Viacom have reportedly set Aug. 8 as a deadline for reaching a merger agreement. (CNBC)

• Stock buybacks could reach a record this year. (FT)

• The White House projected that the federal deficit would be over $1 trillion this year, for the first time in roughly seven years. (Axios)

• Wall Street strategists say there’s an increasing, if small, possibility that the Trump administration will try to weaken the dollar. (CNBC)

• Judy Shelton, one of President Trump’s nominees for the Fed board, didn’t show up to nearly half of the board meetings of the European Bank for Reconstruction and Development, where she’s the U.S. envoy. (WSJ)

• The E.U. expects the World Trade Organization to allow America to proceed with tariffs over a dispute about illegal aircraft subsidies. (Bloomberg)

• Facebook has unveiled a new tool to shut down online scams. (FT)

• Some lawmakers think Apple isn’t living up to its talk on privacy. (WaPo)

• DuckDuckGo is s trying to attract users to its privacy-focused search engine. But taking on Google isn’t easy. (NYT)

• Tesla has dropped the price of its entry-level Model 3, but removed the cheapest Model S and Model X variants from its lineup. (Reuters)

• Christine Lagarde has an atypical set of credentials for running the European Central Bank. Does that matter? (NYT)

• Black homeownership is at an all-time low. (WSJ)

• A federal judge reduced the damages that Bayer must pay in a case about its Roundup weedkiller to $25 million, from $80 million. (FT)

Thanks for reading! We’ll see you tomorrow.

You can find live updates throughout the day at nytimes.com/dealbook.

'We have to hold our nerve,' Taoiseach tells farmers as they reveal fears over 'no deal'

Royal wedding 2020: One hint Princess Beatrice’s wedding will be similar to sister Eugenie

British sausages face being banned in EU after Brexit
Asia

One Russian on cruise ship confirmed to have coronavirus: embassy
We and our partners use cookies on this site to improve our service, perform analytics, personalize advertising, measure advertising performance, and remember website preferences.Ok