TBILISI, Georgia — The republic of Georgia’s richest citizen, Bidzina Ivanishvili, is a born builder. He owns what is easily Tbilisi’s most eye-catching private structure, a futuristic, $50 million steel-and-glass castle, nicknamed “the glassle,” on a hill near the city’s historic neighborhood. It is a 107,000-square-foot personal office, complete with a helipad, a collection of modern art and a shark tank.

Mr. Ivanishvili, 63, is also the most powerful man in Georgian politics, and when it comes to building anything high profile, his blessing is essential, especially when taxpayers’ money is involved. No current project has a higher profile than the $2.5 billion deepwater port that may, or may not, be rising in Anaklia, a town on the Black Sea.

Pitched by investors as an opportunity to grab a greater share of the shipping traffic between Central Asia and the West, the port project is backed by a consortium that includes a Georgian investment group and companies in the United States and the United Kingdom.

Unfortunately for those backers, the project keeps hitting obstacles. One of them is apparently Mr. Ivanishvili. Publicly, he has supported the port. But the Anaklia consortium, and various critics, say he has waged a thinly veiled campaign against it. 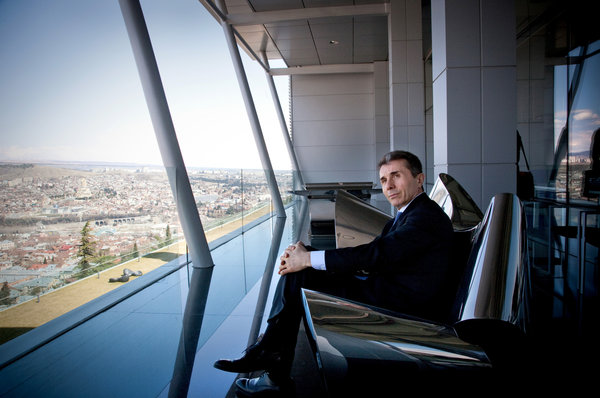 This would amount to little more than local political intrigue except the stakes are far higher for Georgia than they may at first appear. For years, the country has struggled to sever its Soviet republic roots and emerge from the shadow of Russia, its neighbor and perennial antagonist. With sporadic success, it has sought true independence and the chance to recast itself as a place that is friendly to Western investors, one that is strategically situated at the intersection of Europe and Asia. The port is intended as a giant leap in that direction.

But history here is not easily shed. In June, there were several nights of anti-Moscow protests in Tbilisi, touched off by a diplomatic incident and sustained by rage over Russia’s continuing occupation of 20 percent of Georgian land that was lost in a brief war in 2008.

The port project inexplicably ran into problems. In January, the country’s chief prosecutor, who was previously Mr. Ivanishvili’s lawyer, announced a money-laundering investigation involving two of the Anaklia consortium’s bankers, citing transactions from more than a decade ago. It is unclear what could be gained by derailing the project, if in fact that was the goal. But business leaders say the charges had little do with justice.

“The goal was to discredit the project,” said Fady Asly of the International Chamber of Commerce in Georgia. “Give me two prosecutors, 48 hours and a mandate to go back in the past 20 years and, trust me, I can put anyone in jail.”

The Anaklia port is no longer just an ambitious infrastructure project that could give Georgia a toehold in the lucrative business of international trade. It has become a test, of Georgia’s geopolitical place in the world and of its government. Secretary of State Mike Pompeo raised the topic during a news conference with the Georgian prime minister in June. He urged that the project be completed, arguing it would “enhance Georgia’s relationship with free economies and prevent Georgia from falling prey to Russian or Chinese economic influence.”

Nominally a parliamentary democracy, Georgia has many of the trappings of a Western government, including free elections. But for years it has been firmly in the control of Mr. Ivanishvili, an introverted, yoga-practicing oligarch who was born in poverty in Georgia and who, critics say, is now primarily interested in enhancing his considerable fortune. Estimated at $5 billion, that fortune is equal to roughly one-third of Georgia’s gross domestic product.

He earned it in Russia during its free-for-all privatization era, selling push-button phones and computers, generating enough capital to form one of the country’s first private banks. Later came timely ventures into banking, real estate and metals. One investment was in a Siberian aluminum processing plant in Krasnoyarsk, a centerpiece in what came to be known as the Aluminum Wars in the 1990s. In a rare interview with Forbes, in 2012, Mr. Ivanishvili said the investment was both highly lucrative and, given the number of people killed in this economic skirmish, very scary.

“My main values are life and freedom,” he told the magazine.

With business in Russia growing more dangerous, he returned to Georgia in 2003 and began collecting art. The walls of his office have featured works by Monet, Picasso, Lucian Freud and others. Fearing robbery, he has told many visitors that all the works are fakes, with the originals stored in London.

Mr. Ivanishvili has spent money on worthy causes and eccentric indulgences. He built a private zoo, stocked with lemurs, penguins and zebras. To the irritation of environmentalists, he also dug up and transported rare and immense trees — one weighed 650 tons — from far-flung parts of Georgia to his arboretum in Ureki, a resort town on the Black Sea.

Mr. Ivanishvili would not comment for this article, and he has always kept an unusually low profile given his prominence. Few Georgians even knew what he looked like when he founded the Georgian Dream Party, in 2011, and Google was of little help.

He was the country’s prime minister for a year after the 2012 elections, but his only public title now is Dream Party leader. He prefers to exert his power more quietly, in the privacy of his glassle, and through subordinates. The chief prosecutor is not the only influential public servant who was once on his payroll. The head of the state’s security apparatus was once his bodyguard, and until late June, the minister of health was his former personal physician. A previous minister of economy used to be the chief executive of Mr. Ivanishvili’s Cartu Bank.

“We don’t have petty corruption any more, like police asking for bribes,” said Eka Gigauri of Transparency International in Tbilisi. “We have elite corruption.” The group published a study last year documenting dozens of highly placed public officials, in the judiciary, legislature, executive branch, who once worked for companies linked to Mr. Ivanishvili.

Public intercessions by Mr. Ivanishvili are now as rare as they are sensational. Late last year, when the Dream Party’s presidential candidate seemed to be headed for defeat, the government announced that a charity Mr. Ivanishvili directs would cancel the debts of 600,000 citizens, an act valued at roughly $560 million. Dream Party officials said the plan had been in the works for months and had nothing to do with the election. Political opponents called it one of the biggest vote-buying exercises in history. Whatever it was, the Dream Party’s candidate won.

Dream Party leaders describe Mr. Ivanishvili as a patriot who is pushing for Western values. They say that by neutral standards, like the World Economic Forum’s Ease of Doing Business Index, Georgia has improved substantially in the past seven years.

“The media is diverse and very critical, property rights are protected,” said Archil Talakvadze, the speaker of Georgia’s Parliament. “Elections are run in a free and fair democratic style.”

Mr. Talakvadze and other Dream party members also say the government has fully supported the Anaklia project, noting that it was the administration’s idea.

Officials asked for bids for a contract to build and manage the port in 2014, and a consortium led by TBC Holding, which is based in Georgia, won it. The partners include the Conti Group, a designer of capital asset projects based in Edison, N.J., and SSA Marine, a port-management company based in Seattle.

Neither of the American companies returned emails and calls seeking comment.

Dredging has started at Anaklia, but the project is behind schedule. Raising money took longer than expected, and there have been other headaches along the way. Then, on Jan. 9, a full-on migraine set in.

That day, Georgia’s chief prosecutor’s office announced that it was investigating $17 million in loans that TBC Bank had made to two Georgian companies in 2008. The authorities said two TBC executives — Mamuka Khazaradze, the bank’s chairman, and Badri Japraridze, the deputy chairman — had taken loans in identical amounts from the two companies and had then written off the debts “without any grounds.” Mr. Khazaradze co-founded TBC Bank and is the sole founder of TBC Holding.

The money-laundering investigation has gone quiet in the intervening months, which is just one reason that business leaders and Transparency International have been puzzling over it. Dream Party representatives say the case is simply the rule of law in action. Others maintain that Mr. Ivanishvili initiated the case because of a falling out with Mr. Khazaradze, whom he considers a future political rival. Under this theory, Mr. Ivanishvili was not trying to stop the port. He was trying to thwart a man.

Levan Akhvlediani, the chief executive of the Anaklia Development Consortium, said that if that was true, the administration did not understand how business works.

“The government has tried to segregate these charges and say that ‘what we’re doing with Mamuka has nothing to do with the port,’” he said. “But they’re attacking the main sponsor of the port. What sane investor would co-invest with someone with these charges against him?”

It took some hand-holding, but the port’s foreign investors have remained steadfast, Mr. Akhvlediani said.

But this is precisely the sort of politically driven drama that helps explains why outside investment in Georgia stands at the same level that it stood in 2006, Mr. Asly of the Chamber of Commerce said. To him, the efforts to undermine the Anaklia project are proof that business and politics in Georgia remain tragically intertwined.

“When the government changes the next time, all the businesses close to Ivanishvili will be attacked,” he said. “When that happens, I will be the only person in Georgia defending him. Not because I have any particular sympathy for him, but because I believe business should be kept out of political war.”

What a hard Brexit would mean for trade between Britain and the United States.