LONDON (Reuters) – A sharp rise in the number of coronavirus deaths and infections unnerved world markets on Thursday, as traders halted the rally in stocks and retreated to the safety of government bonds and gold. 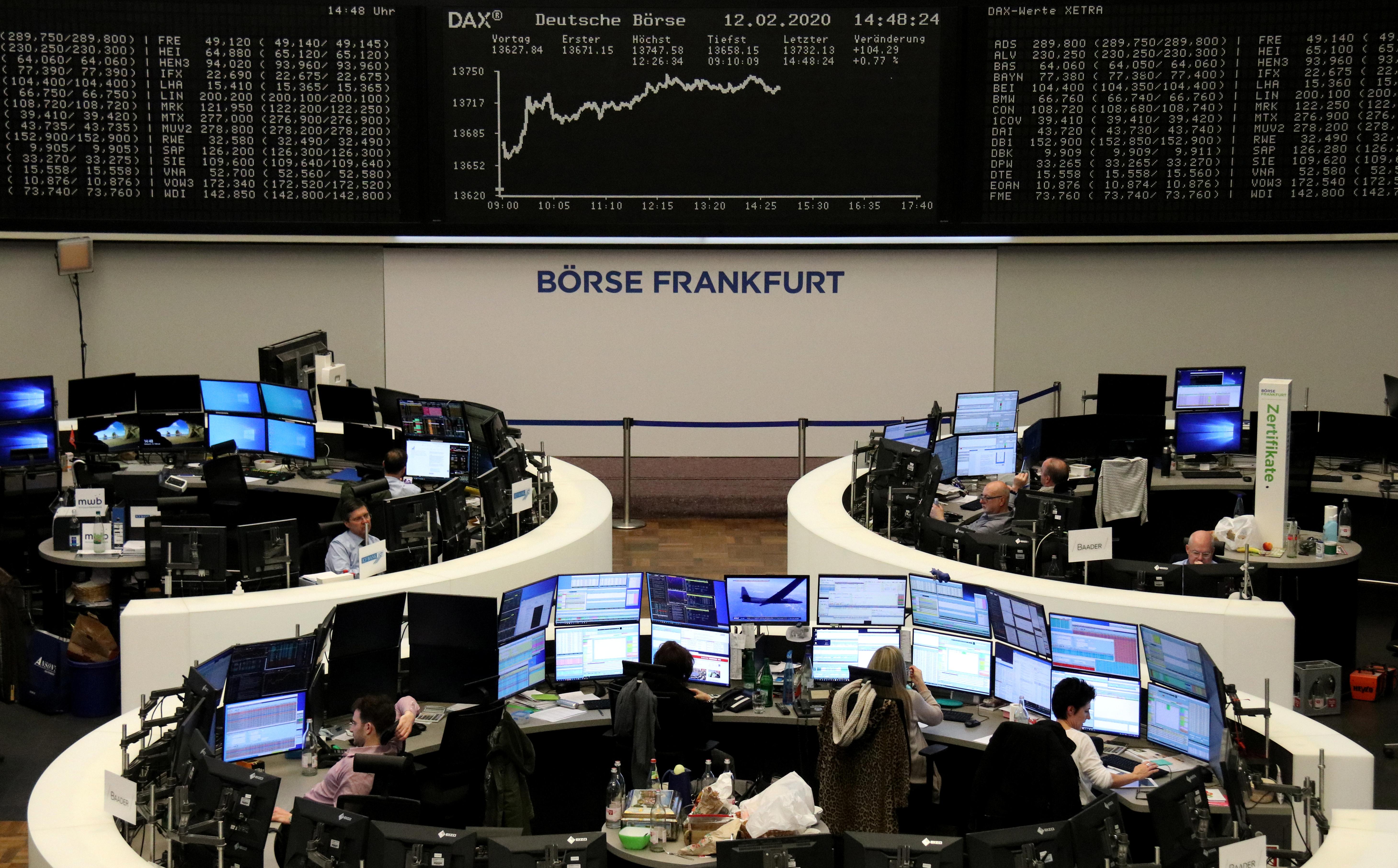 China’s Hubei province, where the virus is believed to have originated, reported 242 new deaths, double the previous day’s toll and the fastest rise since the pathogen was identified in December.

It also confirmed 14,840 new cases, though it was amplified significantly by a switch to using quicker computerized tomography (CT) scans – which reveal lung infections – to confirm virus cases.

Excluding cases confirmed using the new methods, the number of new cases rose by only 1,508, the official data showed, though for markets the net result was more uncertainty about how long problems are likely to persist.

Europe quickly followed Asia into red with London FTSE .FTSE, Frankfurt’s DAX .GDAXI and Paris’ CAC 40 .FCHI down 0.3% to 0.9%, and the euro slumped near a three-year low against the dollar after a torrid couple of weeks.

AXA Investment Management’s chief economist Gilles Moec said the impact of virus could be part of a “perfect storm” for Europe that hurts the economy for months and then gets compounded by a heated trade battle with the United States.

“We started with the premise that this virus would be worse that SARS and that has become consensus,” Moec said.

“So attention turns to who is hit the hardest and Europe is among the usual suspects and Germany in particular give China is its biggest export market. So the reaction of the exchange rate is probably rational,” he added.

With investors seeking safety, 10-year U.S. Treasuries fell below 1.6% US10YT=RR, European yields fell around 3 basis points, the yen strengthened past 110 per dollar JPY= and a rally in oil prices halted.

MSCI’s broadest index of Asia-Pacific shares outside Japan .MIAPJ0000PUS had snapped two days of 1% gains to end 0.1% lower as most markets across the region posted modest declines.

“There is no panic on this,” said Frank Benzimra, head of Asia equity strategy at Societe Generale in Hong Kong, since the dramatic rise seems so far to be contained to Hubei.

The new methodology effectively lowers the bar for classifying new infections, contributing to the spike in cases. Chinese officials said the method is only being used in Hubei, though it was expected to be gradually extended to other regions.

The virus has also cast a shadow over life in Asia’s financial markets, with Benzimra himself logged in from home and speaking to clients by phone as meetings are increasingly canceled, even in cities not subject to quarantine.

“Most markets were recouping their losses so that has offered maybe some excuse to sell Asian markets,” he said. “But there is not much energy in this.”

Markets had taken comfort from the World Health Organization’s (WHO) emergency program head describing the apparent slowdown in the epidemic’s spread as “very reassuring”.

Yet WHO chief Tedros Adhanom Ghebreyesus had also warned that it should be viewed with extreme caution. “This outbreak could still go in any direction,” he said.

Even before the rise in cases, economists were turning more bearish on the likely hit to China’s growth as factories idle and supply chains are upended.

Citi on Wednesday again downgraded its 2020 GDP forecast for China to 5.3%. The bank had forecast it to be 5.8% in its January outlook, before cutting it to 5.5% two weeks ago.

Morgan Stanley believes a gradual, rather than sharp recovery is the most likely scenario. That all bodes ill for regional economies and has weighed on Asian currencies and commodities.

The Australian dollar AUD=D3, a liquid proxy for China’s economic health because of Australia’s export exposure, retraced its recent rally and traded 0.3% softer at $0.6716.

Rallying oil prices stalled, with Brent crude LCOc1 flat at$55.72 per barrel, 15% below where it was before the coronavirus outbreak.

Thames Water powers ahead in search for new chief