Larry Flynt, a ninth-grade dropout who built a $400 million empire of raunchy publications, strip clubs and “adult” shops around his sexually explicit magazine Hustler, and spent decades battling obscenity and libel charges as a self-promoting champion of freedom of the press, died on Wednesday at his home in Los Angeles. He was 78.

The cause was heart failure, said his brother, Jimmy Flynt.

Hustler’s June 1978 cover caught the enigmas of a magazine that was at once salacious, satirical, perverse, decadent, gleefully immoral and hypocritical. It portrayed a woman upside down and half gone into a meat grinder, with a plate of hamburger below. A “seal of approval” noted: “Prime. Last All Meat Issue. Grade ‘A’ Pink.” A caption quoted Mr. Flynt, “We will no longer hang women up like pieces of meat.”

But, of course, Hustler was not serious. Starting with its first issue, in July 1974, and continuing nonstop for four decades, it displayed glossy, full-color photos of female genitalia, pictured naked women in demeaning poses and often depicted group sex and sex-toy fetishes. 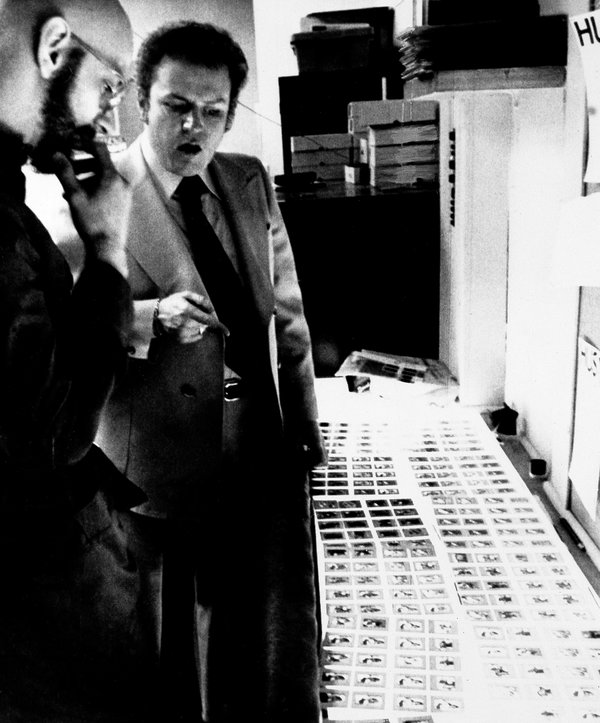 Hustler articles offered “Larry Flynt on Sex in the White House,” “Coverbabe: New Slut in Town” and “Dirty Bedfellows: Explicit Photos & Sordid Tales From a Real Washington Intern.” But it was not all sex; there were also articles like “The Politics of Torture,” “Grenada Invasion: The True Story Behind Reagan’s ‘Facts’ ” and “Shocking New Facts in J.F.K. Assassination Coverup.”

Mr. Flynt’s most significant legal victory came in a long fight against the Rev. Jerry Falwell, the television evangelist and founder of the Moral Majority, who sued for $45 million for libel and emotional distress in 1983 after Hustler published a parody in which he reminisced about a sexual encounter with his mother in an outhouse.

A jury rejected the libel charge, saying the parody was obviously not factual, but awarded Mr. Falwell $200,000 for emotional distress. In 1988, the Supreme Court unanimously threw out the damages, calling the parody constitutionally protected political satire.

Mr. Flynt hailed the decision as the most important First Amendment victory since the obscenity ban on James Joyce’s “Ulysses” was overturned in the 1930s.

For all Mr. Flynt’s notoriety, his image as a defender of free speech was buoyed in 1996 with the Milos Forman film “The People vs. Larry Flynt,” which portrayed him as a kind of American folk hero, a smut peddler wrapped in the stars and stripes. Woody Harrelson was nominated for an Oscar for his performance as Mr. Flynt. The film won raves from many critics and most, though not all, civil libertarians.

But the feminist Gloria Steinem wrote a scathing denunciation on the Op-Ed page of The New York Times. “A pornographer is not a hero,” she said. “Hustler is depicted as tacky at worst, and maybe even honest for showing full nudity. What’s left out are the magazine’s images of women being beaten, tortured and raped, women subject to degradations from bestiality to sexual slavery.”

The images featured in Hustler were certainly graphic and often violent: Women were depicted crawling at the end of a dog leash, nailed to a cross, bagged like a deer and bound to a luggage rack. One cover showed a woman’s head in a gift box.

Hustler claimed a monthly circulation of three million in the mid-1970s, though Forbes said it peaked at two million in 1976. With explicit sex on cable television, on DVD and on the internet, its circulation fell sharply in the ’80s and ’90s. In 1997, The Times said that Hustler’s press runs were under a million, but that half the newsstand copies were being returned unsold. In 2015, Mr. Flynt cited a circulation of 500,000.

The magazine’s revenues for years financed numerous Flynt enterprises: scores of magazines, some mainstream but mostly pornographic, including Taboo, Barely Legal and Asian Fever, whose number and nature varied over time; Hustler strip clubs in a dozen cities; and perhaps an equal number of Hustler chain stores that sold pornographic videos, as well as clothing, magazines and sex toys.

Mr. Flynt also owned a casino in Gardena, Calif.; operated websites that sold pornography; and licensed the Hustler name to magazines and other sex-oriented businesses in Canada, Britain, South Africa and Australia. His major profit centers included Hollywood studios that produced pornographic films, videos and cartoons, many with violent and misogynistic themes.

A 1983 study financed by the Justice Department and conducted by Judith Reisman, the conservative author and academic, found that thousands of cartoons in Hustler, as well as its competitors Playboy and Penthouse, depicted rape, botched abortions and children in sexual poses. “Chester the Molester,” a long-running Hustler cartoon feature about a pedophile, was denounced by many critics, but Mr. Flynt defended it as bawdy social satire.

The value of the Flynt empire was murky. It was privately held and not obliged to disclose finances. Mr. Flynt gave estimates of up to $700 million, but financial experts said his fortune varied widely over time with economic conditions, and the 2015 consensus put his net worth at about $400 million.

Mr. Flynt, who once walked into a federal court wearing a diaper made from an American flag, thrust himself into the spotlight with drumbeat regularly — ridiculing conservative religious leaders, chronicling the sexual peccadilloes of politicians, arousing anger and amusement with parodies of patriotism, and assaulting the dignity of cultural icons.

In 1975, a year after it began publishing, Hustler drew international attention with the publication of nude photographs of Jacqueline Kennedy Onassis, taken by a paparazzo as she sunbathed on an Aegean beach. Mr. Flynt bought the pictures for $18,000 and quickly sold a million copies of the issue that featured them.

Mr. Flynt was prosecuted in 1976 for the first time on obscenity and organized-crime charges for selling obscene material in Cincinnati. Charles Keating, later convicted in a notorious savings and loan scandal, had founded Citizens for Decent Literature and led public outrage over the case. Mr. Flynt lost on both counts and was sentenced to seven to 25 years. But he served only six days, and the conviction was overturned on grounds of prosecutorial misconduct and judicial bias. The case spotlighted Cincinnati as a bastion of conservatism and Mr. Flynt as a dubious champion of free speech.

After being approached in 1977 by the evangelist Ruth Carter Stapleton, President Jimmy Carter’s sister, Mr. Flynt announced that he had become a born-again Christian, saying he had had a vision of God while airborne in his jet with Ms. Stapleton. He banned smoking at Hustler, gave the staff a raise, began a carrot juice diet and vowed to “hustle for God.” But he soon resumed his ventures and vices, calling himself an atheist.

In 1978, while on trial in Lawrenceville, Ga., on an obscenity charge, he was shot near the courthouse by a sniper who fled. Mr. Flynt’s legs were permanently paralyzed, and he spent the rest of his life using a gold-plated wheelchair. The assailant, Joseph Paul Franklin, a white supremacist who objected to Hustler’s portrayal of interracial couples, was captured in 1980. He was never tried for shooting Mr. Flynt, but confessed to a series of murders and was executed in Missouri in 2013.

In later years, many obscenity cases were brought against Mr. Flynt. He lost a few on jurisdictional or privacy grounds. But most foundered on the Supreme Court’s restrictive 1973 test defining obscenity as prurient, patently offensive material devoid of scientific, literary, artistic, political or social value, and taken as a whole in violation of subjective “community standards” — which meant it might play in Times Square, but not in Cincinnati circa 1976.

Mr. Flynt’s interpretation was simpler. “If the First Amendment will protect a scumbag like me,” he said, “then it will protect all of you. Because I’m the worst.”

Larry Claxton Flynt Jr. was born in Lakeville, Ky., on Nov. 1, 1942, the oldest of three children of Larry Claxton Flynt, a sharecropper, and Edith (Arnett) Flynt. After his sister, Judy, died of leukemia in 1951, the family shattered. His parents divorced. Larry lived with his mother; his brother, Jimmy, lived with a grandmother.

At 15, Larry quit school in Salyersville, Ky., and with a phony birth certificate joined the Army. After his discharge, he bootlegged liquor, and in 1960 he joined the Navy and became a radar operator.

Discharged in 1964, he bought a bar in Dayton, Ohio, from his mother for $1,800 and used the profits to buy two more bars, then opened his first Hustler Club, with nude hostess-dancers.

In the late 1960s he opened Hustler strip clubs in Akron, Cleveland, Columbus, Toledo and Cincinnati. To promote his businesses, he created a newsletter featuring nude women. In 1974, it became Hustler magazine.

Playboy, Penthouse and other competitors crowded the newsstands, and Hustler struggled in its first year, partly because distributors and wholesalers balked at handling it. But the pictures of Mrs. Onassis made Hustler infamous overnight, and made Mr. Flynt a millionaire.

He was married five times. His first three marriages all ended in divorce. In 1976 he married Althea Leasure, who had helped start his businesses. She contracted AIDS and in 1987 drowned in a bathtub. In 1998 he married Elizabeth Berrios. He had five children. One, Lisa Flynt, died in a car accident in 2014.

In addition to his wife and brother, he is survived by his other children — T.J. Flynt, Theresa Flynt, Tonya Flynt-Vega and Larry Flynt Jr. — and many grandchildren.

Mr. Flynt published a memoir, “An Unseemly Man: My Life as a Pornographer, Pundit, and Social Outcast” (written with Kenneth Ross), in 1996. He was the subject of a documentary directed by Joan Brooker-Marks, “Larry Flynt: The Right to Be Left Alone,” in 2007. With David Eisenbach, he wrote, “One Nation Under Sex” (2011), about former presidents. After Mr. Falwell’s death in 2007, Mr. Flynt said that despite their differences they had become friends. “I always appreciated his sincerity,” he told The Los Angeles Times, “even though I knew what he was selling and he knew what I was selling.”