VIENNA — OPEC ended a meeting on Thursday without striking a deal to reduce oil output and without any clear sign one would be reached when officials from the organization, Russia and other oil producers reconvene Friday.

As he climbed into a car on a rainy street outside OPEC headquarters, Saudi Arabia’s energy minister, Khalid al-Falih, told reporters he was “not confident” an agreement that would keep supply and demand in balance was within reach.

Mr. Falih had said in the morning that “all options” were on the table, but that a reduction of one million barrels a day — roughly 1 percent of the global oil supply — would be “adequate” to balance the markets. He said he had heard a range of numbers discussed, from 500,000 to 1.5 million barrels a day.

Ann-Louise Hittle, an analyst at the market research firm Wood Mackenzie, said that it was not surprising for the group to fall short of a deal on its first day of meeting.

“They faced a lot of complicated issues,” she said.

Mr. Falih, whose country represents 12 percent of global oil output, said he had met with the American special envoy Brian Hook on Wednesday. He said Mr. Hook had “refrained” from asking the Saudis not to cut production, but quickly added, “I don’t need permission to cut.”

The two men discussed several issues, including Washington’s plans to carry out sanctions on Iran.

OPEC has been whipsawed by competing pressures lately.

On one hand, the world is widely viewed as having an oil glut substantial enough to justify a cut in production. Such a move would prop up prices, which have tumbled since reaching about $76 a barrel for West Texas intermediate crude, the American benchmark, in early October. Prices fell again Thursday. West Texas crude dipped more than 3 percent, to $51.26 a barrel. Brent crude, the international benchmark, dropped about 3.5 percent, to $59.40.

As low as prices have gotten, President Trump is pressing OPEC, and Saudi Arabia in particular, to maintain production levels to keep them down for American consumers. Mr. Trump used Twitter on Wednesday to show that he was paying attention to the talks.

“Hopefully OPEC will be keeping oil flows as is” he wrote in one post. “The World does not want to see, or need, higher oil prices!”

The president’s attempts to intervene in OPEC deliberations create a quandary for the Saudis, whose role in setting production levels and influencing the markets makes them key decision makers at OPEC.

“The Saudis have many constituencies to please, some of them contradictory,” Mr. Diwan said. “The tweeting takes away their ability communicate effectively.” 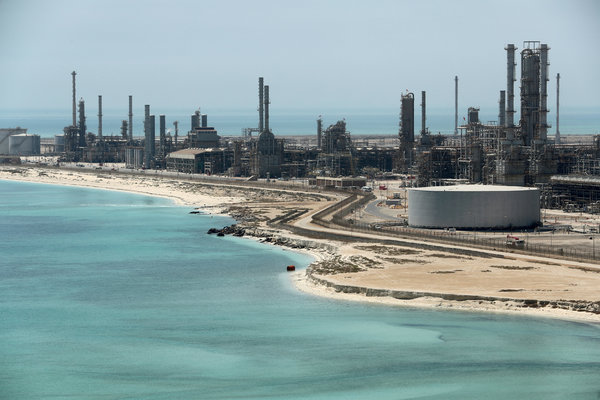 In normal times, analysts said, there would be little hesitation to cut supplies. But these are not normal times.

“This is one of the strangest OPEC meetings I can remember,” Jim Krane, an energy fellow at the Baker Institute at Rice University said on Wednesday. “Balancing the oil market is taking a back seat to political intrigues involving Saudi Arabia and Donald Trump.”

Tensions are also emerging within OPEC. Qatar, which has long been part of a bloc of Gulf Arab states supporting the Saudis, said on Monday that it would leave the oil cartel next year to focus on developing natural gas. It hinted that the decision was motivated partly by frustration over the Saudis’ dominance of oil policy.

Iran, Saudi Arabia’s longstanding rival in OPEC, is a complicating factor. The Iranians reacted angrily to news reports of Mr. Hook’s presence in Vienna. The diplomat has been traveling the world to build support for America’s latest sanctions against Iran.

The Iranian oil minister, Bijan Zanganeh, criticized Mr. Hook’s discussions as “unprofessional” and “interfering,” according to the Iranian news agency IRNA, and said that OPEC was an independent body that did not take orders from the United States, which is not a member.

Mr. Zanganeh also told reporters before the beginning of the meeting on Thursday that Iran would not accept a cut beyond what was already being reduced by sanctions.

Saudi Arabia, the world’s largest exporter, and Russia, which also produces about 12 percent of the world output, increasingly see their interests aligned. Production cuts in late 2016 lifted prices to the point that Saudi Arabia and Russia were persuaded in June to open up the taps. The move was partly a response to Mr. Trump’s complaints at the time about rising prices.

Russia’s energy minister, Alexander Novak, did not attend the meeting on Thursday, but was expected to be at the session on Friday.

“What this confirms is that you need to have Russia in place to have a credible deal,” said Roger Diwan, a vice president for oil market strategy at the research firm IHS Markit.

The U.S. Energy Information Administration reported on Thursday that last week the United States had become a net exporter of oil, gasoline and other refined fuels for the first time in 75 years, a notable, if potentially fleeting, distinction.

Chinese firms' investment in Ireland surges by 200pc to €87m

United Airlines lost $7 billion in 2020 as the pandemic crushed the travel business.