On May 29, a single-pilot jet plane crashed into a lake near Nashville, killing all seven people on board. Among them were Gwen Shamblin Lara, a weight-loss guru and the founder of the Remnant Fellowship Church of Brentwood, Tenn., and her husband, William Lara, who was known as Joe and had once portrayed Tarzan in both a television series and the movie “Tarzan in Manhattan.”

The leader of a midsize congregation, Ms. Lara, 66, had for the past several years been the main subject of a documentary project that sought to get beyond the gilded veneer of the Remnant Fellowship and investigate its inner workings. Set to debut on HBO Max in the fall, the multi-episode project, “The Way Down,” details the church’s origin in Ms. Lara’s religious-based weight-loss program, the Weigh Down Workshop.

The diet program brought Ms. Lara fame — through appearances on popular shows like “Larry King Live” — and fortune, thanks to best-selling books touting her strategies to lose weight. But it also made her a controversial figure, with critics saying Weigh Down focused more on unconventional theology than on healthy eating habits. The documentary examines those issues, along with allegations that the church shunned and even harassed members who wanted to leave and that it functions more as a cult than a traditional religious institution. 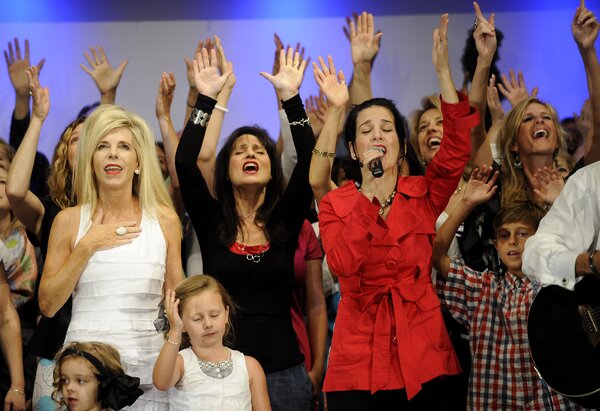 At the time of the crash, the finishing touches were being put on the series. Suddenly, the filmmakers were faced with a new set of questions. What was the extent of Mr. Lara’s flying experience (he was operating the aircraft), and were his medical records up to date? What would happen to the church now that its founder and leader was dead? (A day after the crash, the church released a statement saying Ms. Lara’s daughter and son “intend to continue the dream that Gwen Shamblin Lara had of helping people find a relationship with God.”)

And what would happen in the bitter custody case, involving Mr. Lara’s daughter with his ex-wife, which formed a crucial story line in the documentary?

The filmmakers also said that since the crash, they had found that more people were eager to speak to them — former congregants who said they had previously been unwilling to go against the church publicly because they still had family members who are affiliated, and relatives of those killed in the crash who were skeptical of the church and now felt compelled to share their stories.

“Within 24 hours I had heard from every single source, and the first thing everyone said was ‘I don’t want to be disrespectful, but please tell me this doesn’t change anything,’” regarding the documentary, said the producer Nile Cappello, an investigative journalist who started researching Remnant Fellowship in 2018.

Ms. Cappello added that for those who had already spoken out against the church, some at great personal sacrifice, what she heard most frequently was worry the documentary would be curtailed in some way, “that we have opened up these wounds for nothing.”

Though archival footage of Ms. Lara preaching and making media appearances is shown in the documentary, neither she nor any representatives from Remnant Fellowship were interviewed on camera by the filmmakers.

“I never thought she would give us an interview,” the series director, Marina Zenovich, said of Ms. Lara. “Never.”

Remnant Fellowship did not return calls seeking comment about the series for this article.

While the filmmakers scrambled to incorporate news of the crash and its aftermath into the documentary, HBO Max altered its plans too. Now, rather than release a four-part series at the end of September, the first three episodes of “The Way Down,” will become available on Sept. 30, concluding with a “To Be Continued” message. The final two episodes will debut in early 2022, giving the filmmakers time to deal with the new footage. The documentary now begins with local news coverage of the crash.

“There is a fuller story to be told,” said Lizzie Fox, senior vice president of nonfiction at HBO Max. “We just want to make sure that we can allow enough time for the story to progress and the investigation to pursue some answers and give us time to interview all the subjects. With a limited docu-series, if there’s ever a chance to have a second part, I think it’s something that people tend to get excited about.”

Ms. Zenovich is a documentarian who has spent most of her career focusing on men like Roman Polanski, Lance Armstrong and Robin Williams. But the world of evangelical religion was new terrain, one she decided to embark on because of the compelling character at the story’s center.

“It’s deeply upsetting,” she said. “But I decided to do it because I was fascinated by Gwen.”

Ms. Lara, who trained as a dietitian, began her Weigh Down Workshop in 1986. It was a diet plan that set aside common health guidelines and instead focused on a reliance on God, urging members that in order to understand true hunger they should eat only when their stomach growled. By the mid-2000s, her advice had become very popular within religious communities, and Ms. Lara’s books sold millions of copies. She parlayed that success into Remnant Fellowship, a church she founded in 1999 with her husband at the time, David Shamblin, after splitting with the Church of Christ. The Weigh Down philosophies remained a central tenet of her new congregation.

As ex-members describe it in the documentary, the church was less a place of worship and more an all-encompassing power that took over every aspect of their lives, from where they worked and how they dressed to whom they married. Body image and appearances were central components, and the documentary chronicles Ms. Lara’s own transformation, from a bubbly young dietitian with girl-next-door looks into a very thin, heavily made-up avatar whose hair seemed to grow in height in relation to her power.

Ms. Lara’s broader popularity eventually began to wane in part because of her rejection of the Holy Trinity, views that prompted a Christian publisher to cancel her upcoming book and others to stop promoting her weight loss program.

“Gwen’s whole control is using misogyny against other women,” Ms. Cappello said, adding that Ms. Lara was one of the few female religious leaders in the evangelical Christian movement but had an entirely male leadership team. Ms. Lara also demanded that her congregants adhere to traditional familial gender roles in order to maintain their standing in the church.

Among the allegations raised in “The Way Down” are accusations that individuals unable to lose weight were marginalized by the church community and that members were encouraged by Remnant leadership to stop taking prescribed medication including birth control and psychiatric drugs.

Now the filmmakers are scrambling to tell a more comprehensive story of the church, its founding and its impact on Brentwood.

“It was never about not continuing,” said Ms. Zenovich, who is particularly compelled by the stories of those who left the church. “It’s about shifting how we were going to tell the story.”