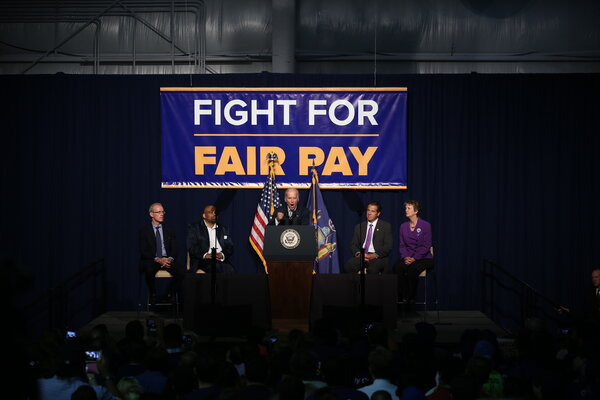 President Biden plans to sign an executive order on Tuesday raising the minimum wage paid by federal contractors to $15 an hour, the latest in a set of ambitious pro-labor moves at the outset of his administration.

The new minimum is expected to take effect next year and is likely to affect hundreds of thousands of workers, according to a White House document. The current minimum is $10.95 under an order that President Barack Obama signed in 2014. Like that order, the new one will require that the new minimum wage rise with inflation.

Two administration officials said in a call with reporters that White House economists believed the increase would not lead to significant job losses, a finding in line with recent research on the minimum wage, and that it was unlikely to cost taxpayers more money. They argued that the higher wage would lead to greater productivity and lower turnover.

The White House also contends that while the number of workers directly affected by the increase is relatively small as a share of the economy, the executive order will indirectly raise wages beyond federal contractors by forcing other employers to bid up pay as they compete for workers.

Several cities have a minimum wage of at least $15 an hour, and several states have laws that will raise their minimum wage to at least that level in the coming years. There is so far little evidence on how a $15 minimum wage affects employment in lower-cost areas of such states.

Two years ago, the House of Representatives passed a bill to raise the federal minimum wage to $15 an hour by 2025, but the legislation has faced long odds in the Senate. Mr. Biden sought to incorporate such a measure in his $1.9 trillion pandemic relief package so that it could pass on a simple majority vote, but the Senate parliamentarian ruled that it could not be included.

Mr. Biden’s executive order will also eliminate the so-called tipped minimum wage for federal contractors, which currently allows employers to pay tipped workers $7.65 an hour as long as their tips put them over the regular minimum wage. Under the new minimum, all workers must be paid at least $15 an hour.

The order will technically begin a rule-making process that is expected to conclude by early next year. The wage will be incorporated into new contracts and existing contracts as they are extended.

Interest rate rise after a Brexit no-deal is 'implausible'