Home » Business » The Biden Administration Is Quietly Obsessing Over Inflation

A monthslong effort to monitor and model economic trends inside the White House and the Treasury Department found little risk of prices spiraling upward faster than the Fed can manage. 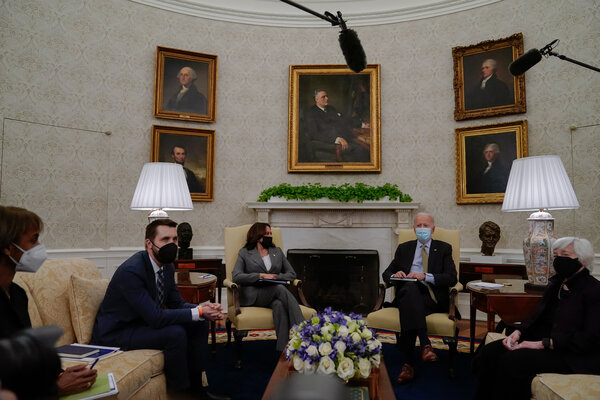 WASHINGTON — Even before President Biden took office, some of his closest aides were focused on a question that risked derailing his economic agenda: Would his plans for a $1.9 trillion economic rescue package and additional government spending overheat the economy and fuel runaway inflation?

To find the answer, a close circle of advisers now working at the White House and the Treasury Department projected the behaviors of shoppers, employers, stock traders and others if Mr. Biden’s plans succeeded. Officials as senior as Janet L. Yellen, the Treasury secretary, pored over the analyses in video calls and in-person meetings, looking for any hint that Mr. Biden’s plans could generate sustained price increases that could hamstring family budgets. It never appeared.

Those efforts convinced Mr. Biden’s team that there is little risk of inflation spiraling out of the Federal Reserve’s control — an outcome that Wall Street analysts, a few prominent Republicans and even liberal economists like Lawrence H. Summers, the former Treasury secretary, have said could flow from the trillions being pumped into the economy.

Traditional readings of price increases are beginning to turn upward as the recovery accelerates. On Tuesday, the Consumer Price Index rose 0.6 percent, its fastest monthly increase in more than a decade, while a less volatile index excluding food and energy rose a more muted 0.3 percent.

But Mr. Biden’s advisers believe any price spike is likely to be temporary and not harmful, essentially a one-time event stemming from the unique nature of a pandemic recession that ruptured supply chains and continues to depress activity in key economic sectors like restaurant dining and tourism.

The administration’s view mirrors the posture of top officials at the Fed, including its chairman, Jerome H. Powell, whose mandate includes maintaining price stability in the economy. Mr. Powell has said that the Fed expects any short-term price pops to be temporary, not sustained, and not the type of uptick that would prompt the central bank to raise interest rates rapidly — or anytime soon.

Plotting a course amid political uncertainty