For decades it was a given that the back seat of a car is the safest place in a crash. But that’s no longer certain, as advances in seatbelt technology up front have been slow to jump to the back seat.

Safety researchers now have new recommendations about what to buy and where to sit, highlighting vehicles whose rear seats have the kind of sophisticated seatbelts that have protected front-seat riders for roughly a decade.

Those belts tighten up when sensors detect a crash is imminent. They also can loosen a bit if the occupant is pressing against the belt so hard that the belt itself might cause an injury.

If belts with this better technology aren’t available in the back seat, people 55 and older should sit in the front of newer vehicles with those more sophisticated belts, according to the National Highway Traffic Safety Administration.

Researchers say seatbelts in most rear seats lack these so-called load limiters, which means they can’t loosen up. So, in a frontal crash, the belt itself can cause chest, abdominal or spinal injuries, according to a new study by the Insurance Institute for Highway Safety and Children’s Hospital of Philadelphia. Researchers investigated frontal crashes that killed or seriously injured 117 rear-seat occupants between 6 and 92 years old.

“There was evidence of significant seatbelt forces on the chest of occupants of all ages,” said Jessica Jermakian, a researcher at the institute, which is funded by the insurance industry.

Nevertheless, those rear seatbelts — without load limiters or the “pre-tensioners” that tighten for a crash — meet federal safety standards, which are considered a minimum level of protection.

Researchers say improvements are needed because the back is likely to be occupied more often, with people such as older adults who have given up driving or passengers using ride-hailing services like Uber and Lyft. The safety of the back seat could become a bigger focus with autonomous vehicles.

And within a few years it may be possible for consumers to learn which models best protect back-seat occupants. By 2022, the insurance institute hopes to have a back-seat crash test, allowing buyers to compare new models.

[See below for a list of the vehicles with such seatbelts.]

That may prompt automakers to make improvements absent federal regulations. The insurance institute has no regulatory authority, but automakers have proved sensitive to the publicity generated by bad ratings and eager to advertise good ratings.

The federal highway safety agency said in December 2015 that it was considering such a crash test, but it has yet to offer one.

Technically, the back seat did not get more dangerous. The front seats just kept getting safer.

Making front-seat safety a priority made sense, said Aditya Belwadi, a researcher at the Center for Injury Research and Prevention at Children’s Hospital of Philadelphia. Front-seat occupants experience most of the force of a frontal crash. Those in the back have the advantage of distance.

“You have a substantial amount of space that we call a crush space, between you and the other vehicle,” Mr. Belwadi said. “A lot of crash energy is dissipated between the front seat and back seat.”

Automakers also didn’t focus on the back seat because it was often unoccupied, and upgrading the safety equipment would cost more, said Jingwen Hu, a research associate professor at the University of Michigan’s Transportation Research Center who has studied back-seat safety.

Other studies have noted that adults 55 and older — who tend to have more fragile bones — can be injured by the belts. But the institute’s study points to risks for children, Ms. Jermakian said.

“This was really the first time we got a clear understanding of how children are also getting those injuries,” she said. 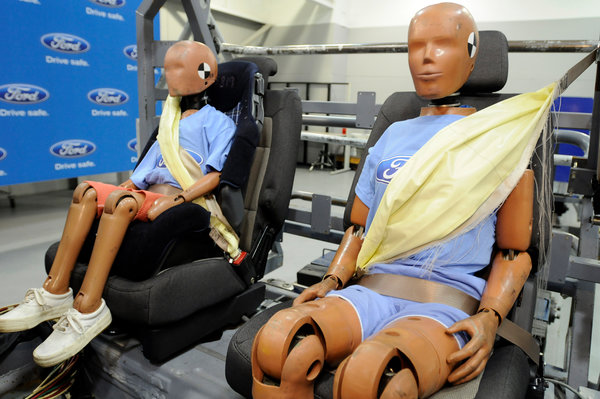 Researchers and the highway safety agency agree that children under 13 should still sit in the back because crashes are complex events and that while improvements are needed, the back seat is still safest for them over all.

“We have a lot of data to support that,” said Mr. Belwadi of Children’s Hospital of Philadelphia. “It is still very safe in the back seat.”

Why should older adults sit up front and not children?

“Kids are complicated,” Mr. Hu of the University of Michigan said. “They are very different from older folks in terms of injury patterns and mechanisms.”

And while the institute study found that seatbelts can cause serious injuries, a 2014 institute study showed there is a far greater danger in not wearing one, Ms. Jermakian said. That hazard includes being thrown into the occupants up front, injuring them.

It is possible to put seatbelts like those up front in the back seat, and a few automakers are doing that. It’s not as simple as using the exact same technology, however. When the belt loosens, for example, it may allow the head to move too far forward and hit the back of the front seats, Mr. Hu said. In the front seat there’s an airbag to protect the head as the force limiter eases its grip. There’s no airbag in the back seat, and putting one there is tricky because the front seats aren’t stationary.

That’s why Ford developed a seatbelt that inflates like an airbag, so it holds the occupant securely but spreads the force over a wider area, said Srinivasan Sundararajan, a safety researcher at Ford. Introduced as an option on the 2011 Explorer, it is now available on several models.

But it hasn’t been a hit with customers, Ford acknowledged. One issue was that the larger-than-normal belt buckle was hard to use for children or people with dexterity issues. And customers may not have understood the benefit of paying extra.

So Ford is changing its strategy and will offer belts with pre-tensioners and load limiters in the back seat as standard equipment on many models, said Desi Ujkashevic, Ford’s global director for its Automotive Safety Office.

“Safety continues to evolve,” she said.

Here are the current models that automakers say have load limiters and pre-tensioners for the second-row back seats adjacent to windows.

■Mercedes-Benz “Belt Bags” available on S-Class and E-Class. Did not provide information on pre-tensioners and load limiters.

Microsoft rolls out new cloud services for AI and blockchain