Home » Business » ‘There Was No Mercy’ 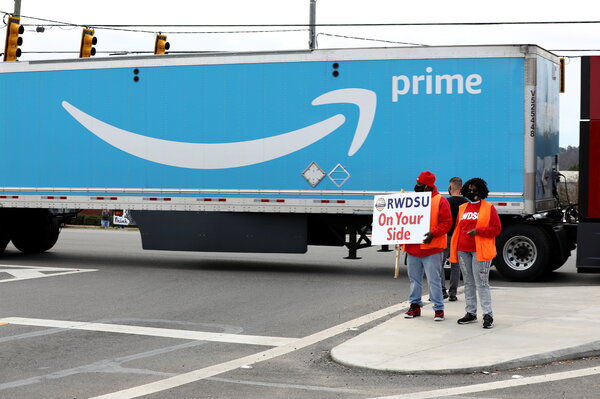 Amazon faces a unionization drive at a warehouse in Bessemer, Ala. — the largest and most viable U.S. labor challenge in years. The Times’s David Streitfeld looked into the e-commerce giant’s previous efforts to block organized labor. He found a host of tough tactics … that worked. Will they again?

Among Amazon’s steps to oppose a unionization drive in Chester, Va. five years ago, according to regulatory documents and employees:

Human resources officials were brought in, and some were accused of following workers to glean their positions on the union drive.

Supporters of the effort were described as “a cancer and a disease to Amazon and the facility,” according to Bill Hough Jr., a leader of that organization effort, and a memo from the union sponsoring the effort.

Mr. Hough was accused of insubordination and was told he may lose his job if he continued to have a “negative impact.”

Mr. Hough’s verdict: “There was no mercy.”

Amazon secretly reached a settlement with the National Labor Relations Board, after the union behind the drive lodged a complaint. The company was required to post notices around the warehouse promising good behavior, though it did not have to admit to labor law violations or pay financial penalties.

In the end, most employees who had supported the union drive quit.

Organizers of the Alabama unionization effort say the company has tried similar tactics. Amazon, they assert, tried to surveil employees while posting notices around the Bessemer warehouse bad-mouthing the union. (One claimed workers would need to skimp on dinner to pay union dues.) Management even changed a traffic signal to hinder organizers’ efforts to approach workers.

Union organizers are pessimistic. Nearly 6,000 workers at the Bessemer warehouse have until March 29 to decide whether to join the Retail, Wholesale and Department Store Union. “They will fall to threats or think, ‘I won’t have a job, Amazon will replace me,’” Mr. Hough told The Times. He added, “I’m hoping for the best.” In a statement, Amazon said it did not believe the union push in Alabama “represents the majority of our employees’ views.”

More European countries suspend the use of AstraZeneca’s vaccine. Germany, France, Italy and Spain paused the inoculations amid reports that a handful of recipients had developed blood clots. Medical experts said there was “no evidence” linking the vaccine to increased risk of clots, but the moves could add to the problems of Europe’s vaccination initiatives.

Volkswagen outlines plans to counter Tesla’s battery dominance. The European carmaker announced efforts to cut costs and improve vehicle charging times, as well as build six battery factories. One analyst said it served as “a blueprint for what legacy carmakers need to achieve.”

Warren Buffett bucks calls for E.S.G. disclosures. In Berkshire Hathaway’s annual proxy, Mr. Buffett’s conglomerate urged shareholders to reject proposals for more transparency of climate-related risks and diversity and inclusion efforts. It’s a marked contrast to the increasing disclosure into environmental, social and corporate governance issues (more on that below).

The Sackler family may relinquish control of OxyContin’s maker. Purdue Pharma has released its bankruptcy restructuring plan, which includes a pledge from its founding family to pay $4.3 billion — $1.3 billion more than previously offered — to reimburse the costs of the opioid epidemic.

A day after the chairman and C.E.O. of Danone, Emmanuel Faber, stepped down under pressure from activist investors, other shareholders in the French food giant are turning on the activists. CtW, an adviser to union pension funds with over $250 billion in assets, sent a sharply worded letter yesterday to Artisan Partners, which led the revolt over Mr. Faber’s leadership. The twist in the letter, which was reviewed by DealBook, is that CtW owns a “substantial” number of Artisan shares — and said that the fund needs the sort of governance shake-up it pushed for Danone.

Danone’s commitment to social and environmental objectives is at the heart of the issue. Last year, Danone, which owns Evian and several yogurt brands, was the first public company to adopt the French legal framework of “Entreprise à Mission,” which allows companies to take greater consideration of social and environmental issues in their business model. Some 99 percent of shareholders backed the move, but not Artisan Partners. Danone’s performance has recently lagged behind competitors like Nestle and Unilever, Artisan said when calling for boardroom changes, including someone other than Mr. Faber becoming chairman.

For some, there are bigger concerns at stake: Namely, whether the stakeholder model can survive resistance from activist investors focused primarily on shareholder returns.

CtW says Artisan’s own policies are inconsistent with its demands at Danone. Notably, Eric Colson serves as Artisan’s chairman and C.E.O. “Artisan’s call for an independent chair at Danone while maintaining the positions of C.E.O. and chair combined on its own board is inconsistent with best governance practices,” wrote Dieter Waizenegger, CtW’s executive director. He also questioned the firm’s use of “large discretionary cash bonuses” and demanded a discussion with management by the end of the month. Artisan did not respond to a request for comment.

“The economics of investing in bonds (and most financial assets) has become stupid.”

— Ray Dalio of Bridgewater Associates on the state of the markets.

We have questions for the S.E.C.

Yesterday, we flagged an important speech by Allison Herren Lee, the acting chair of the Securities and Exchange Commission, on environmental, social and governance (E.S.G.) issues. Investors are increasingly demanding more corporate disclosure on these factors, and she suggested that voluntary regimes are not enough. “No single issue has been more pressing for me than ensuring that the S.E.C. is fully engaged in confronting the risks and opportunities that climate and E.S.G. pose for investors, our financial system and our economy,” she said.

We asked Ms. Lee a few more questions about the scope and timing of the agency’s initiatives. Her responses have been edited for clarity and length.

Ms. Lee: We have a lot of ground to cover and a lot of time to make up for. What I don’t want to do is just be sitting here treading water.

Can companies focus on profits and the planet? Is there some tension?

This is one of the most profoundly complex issues that we’ve seen: climate change and how business needs to deal with it. We have got to allow companies leeway in order to experiment and consider how best to do this. It needs to be an iterative process. They need to have some safety around predictions and forward looking statements. We’ve got to work with them. I certainly don’t imply that there’s some set approach that every company needs to take.

What major fault lines do you anticipate in the E.S.G. debate?

One of the biggest questions is going to be, “what is the right mix of principles and metrics?” How are we going to identify what metrics make the most sense and will apply in the broadest way to help investors choose the businesses they wish to invest in?

Political spending is also a hot topic. Can you talk about that?

We’ve got in excess of a million comment letters telling us this is material. Everything I see and read and analyze and academic papers I’ve seen on it make it pretty clear that it can be material. Maybe not in all instances. But it can be. After Jan. 6, companies were making announcements about political spending. But we had no idea what they were doing before, right? How can investors test that? How do they know? There’s no question it is an integral issue — companies themselves plainly think so based on the statements they’ve been making.

In response to Ms. Lee’s remarks, Senator Patrick Toomey, a Pennsylvania Republican and ranking member of the Senate Banking Committee, said that an increased focus on E.S.G. “would be a total abuse of power and a politicization of S.E.C.’s disclosure standard.”

China reportedly asked Alibaba to sell its media assets, including stakes in Weibo and The South China Morning Post, fearing its sway over public opinion. (WSJ)

Blackstone and Starwood Capital teamed up to buy the hotel chain Extended Stay America for $6 billion, betting on a rebound in travel. (NYT)

Treasury Secretary Janet Yellen is coordinating with other countries on a global minimum tax on multinational companies. (WaPo)

Senator Elizabeth Warren has become one of the biggest influences on the Biden administration’s financial policy, judging by appointments. (Politico)

Facebook agreed to pay News Corp for its media content in Australia, a month after it blocked news links in the country over legislation requiring platforms to compensate publishers. (NYT)

Peter Thiel’s biggest political donation yet is $10 million to a super PAC supporting the “Hillbilly Elegy” author J.D. Vance, who may run for the U.S. Senate in Ohio. (Recode)

Innovation happens in an environment where employees feel secure and safe. But women often don’t. (NYT)

We’d like your feedback! Please email thoughts and suggestions to [email protected]