The $1.5 trillion tax overhaul that President Trump signed into law late last year has already given the American economy a jolt, at least temporarily. It has fattened the paychecks of most American workers, padded the profits of large corporations and sped economic growth.

Those results weren’t a surprise. Economists across the ideological spectrum predicted the new law would fuel consumer spending, in classic fashion: When the government borrows money and dumps it into the economy, growth tends to accelerate. But Republicans did not sell the law as a sugar-high stimulus. They sold it as a refashioning of the incentives in the American economy — one that would unleash more investment, better efficiency and higher wages, along with enough growth to offset any revenue lost to the government from lower tax rates.

Ten months after the law took effect, that promised “supply-side” bump is harder to find than the sugar-high stimulus. It’s still early, but here’s what the numbers tell us so far:

Proponents of the tax overhaul said it would supercharge the recent lackluster pace of business spending on long-term investments like buildings, factories, equipment and technology.

Such spending is crucial to keeping economic growth strong. And strong growth is central to Republican claims that the tax cuts would ultimately pay for themselves.

Capital spending did pick up steam earlier this year. For companies in the S&P 500, capital expenditures rose roughly 20 percent in the first half of 2018. Much of that was concentrated: The spending of just five companies — Google’s parent, Alphabet, and Facebook, Intel, Exxon Mobil and Goldman Sachs — accounted for roughly a third of the entire rise. Much of that spending went toward technology, including increased investment in data centers and computing, server and networking capacity.

For the full year, Goldman Sachs analysts expect that capital expenditures for companies in the S&P 500 will be up about 14 percent, to $715 billion. Research and development spending, another component of business investment, was expected to be up 12 percent, to $340 billion.

For the economy as a whole, the surge in business investment was a bit less impressive. It’s true that business spending on fixed investment — such as machinery, buildings and equipment — rose, jumping 11.5 percent and 8.7 percent during the first and second quarters. The first-quarter jump was the fastest for investment since 2011.

But that pace fizzled during the third quarter. Recently data showed third-quarter business investment rose at an annual pace of 0.8 percent. The last quarter of the year — traditionally a big one for capital spending — will fill out the picture, but that data won’t be released until early 2019.

It will likely take years to get a better sense of whether the law fundamentally reshaped American corporate investment. But there’s little clear evidence that it is drastically reshaping the way in which most companies invest and spend.

The results of a survey published in late October by the National Association for Business Economics showed that 81 percent of the 116 companies surveyed said they had not changed plans for investment or hiring because of the tax bill.

Cheerleaders for the tax cut argued that the heart of the law — cutting and restructuring taxes for corporations — would give the economy a positive bump, giving companies incentives to invest more, hire more workers and pay higher wages.

Skeptics said that the money companies saved through tax cuts would merely increase corporate profits, rather than trickling down to workers.

The flow of repatriated corporate cash is just one tributary in what has become a flood of payouts to shareholders, both as buybacks and dividends. Such payouts are expected to hit almost $1.3 trillion this year, up 28 percent from 2017, according to estimates from Goldman Sachs analysts.

Supporters of the tax cuts repeatedly claimed the bill would increase economic growth enough to offset the decline in tax receipts. “I'm totally convinced this is a revenue-neutral bill,” said Senator Mitch McConnell of Kentucky, the Republican leader, when a preliminary version of the bill was approved in the Senate in December 2017.

Despite a remarkably strong economy, the fiscal health of the United States is deteriorating fast, as revenues have declined sharply. The federal budget deficit — the gap between what the government collects in revenues and what it spends — rose to $779 billion in the 2018 fiscal year, which ended Sept. 30. That was a 17 percent increase from the prior year.

It’s highly unusual for deficits and borrowing needs to grow this much during periods of prosperity. A broad variety of analysts attribute the widening deficit to the tax cuts (along with increased military and other domestic spending ushered in through a bill Mr. Trump signed earlier this year).

Corporate tax revenues are down one-third from a year ago. Federal revenues as a whole ran $200 billion behind the Congressional Budget Office’s forecast for the 2018 fiscal year — even though economic growth was faster than the C.B.O. expected. The nonpartisan Committee for a Responsible Federal Budget reports that nominal federal revenues are down by at least 3.6 percent since the tax cuts took effect. 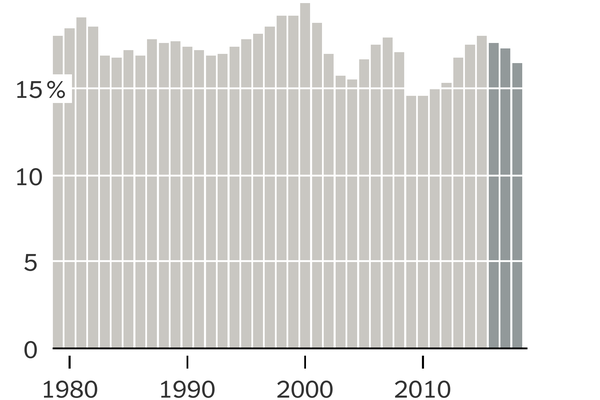 The growing budget gap means the Treasury must borrow more to keep the government running. The Treasury expects to borrow a total of $1.338 trillion from global investors this calendar year. That would be 145 percent higher than the $546 billion the federal government borrowed last year. That would be the highest level of borrowing since 2010, when the American economy was struggling to recover from the great recession.

Shortly after the tax law passed, hundreds of companies — from large multinationals to small manufacturers — announced that they would be using some of their windfall from the law to give one-time bonuses to employees. Others said they would raise minimum wages across the company, or expand worker benefits.

Mr. Trump and Republicans hailed those announcements as evidence that the law’s benefits were flowing substantially to workers. Americans for Tax Reform compiled a list of 750 companies, and growing, that said they would pass tax savings on to workers in some form.

Data from large public companies, however, suggest that most workers received relatively small shares of their employers’ corporate tax savings.

The nonprofit research group Just Capital, which is tracking 1,000 large public companies’ reports of how they are spending their tax cuts, calculates that the typical worker at one of those large companies has received about $225 this year in increased salary, a one-time bonus, or both, attributable to the new law.

Workers for those companies were more likely to see their wages rise if they lived in states where the minimum wage was relatively low — and where companies do not have to pay workers more to compensate for high housing costs. California workers at those companies saw an average benefit of about $160 each, which is less than half the average benefit for workers in Kentucky.

Many companies also said they would use tax savings to create jobs. But the Just Capital research finds that, since the tax cuts were passed, the 1,000 largest public companies have actually reduced employment, on balance. They have announced the elimination of nearly 140,000 jobs — which is almost double the 73,000 jobs they say they have created in that time. About half of those net losses came from companies in the restaurant and leisure industries, the analysis found.

Nearly a year after the cuts were signed into law, wage growth has yet to pick up when accounting for inflation. In September, the Labor Department reported that inflation-adjusted wages had risen 0.5 percent from the year before. That’s a slower rate of growth than the economy itself experienced in September 2017, when it was 0.6 percent.

Growth has accelerated in nominal terms. Median wage growth was 3.5 percent in September, according to calculations by the Federal Reserve Bank of Atlanta, up from 3 percent in January, but still below its recent highs in 2016. Growth in the Employment Cost Index rose from 2.9 percent at the end of 2017 to 3 percent in the third quarter.

By Republicans’ own economic theories, it should take a while for corporate tax cuts to translate into higher worker pay. First, the cuts need to stimulate increased capital investments, which in turn raise worker productivity. More productive workers would then see their wages rise accordingly.

Productivity grew 3 percent in the second quarter of this year and 2.2 percent in the third — healthy numbers, which will need to continue apace to deliver the sort of long-term economic jolt Republicans promised.

Jim Tankersley covers economic and tax policy. Over more than a decade covering politics and economics in Washington, he has written extensively about the stagnation of the American middle class and the decline of economic opportunity. @jimtankersley

China's U-turn on market curbs brings back the speculators