(Reuters) – Technology stocks led a broad selloff on Wall Street on Monday, as the U.S. government shutdown threatens to spill into the next year and the White House moves into fire-fighting mode amid what is already the S&P 500’s worst December since the Great Depression. 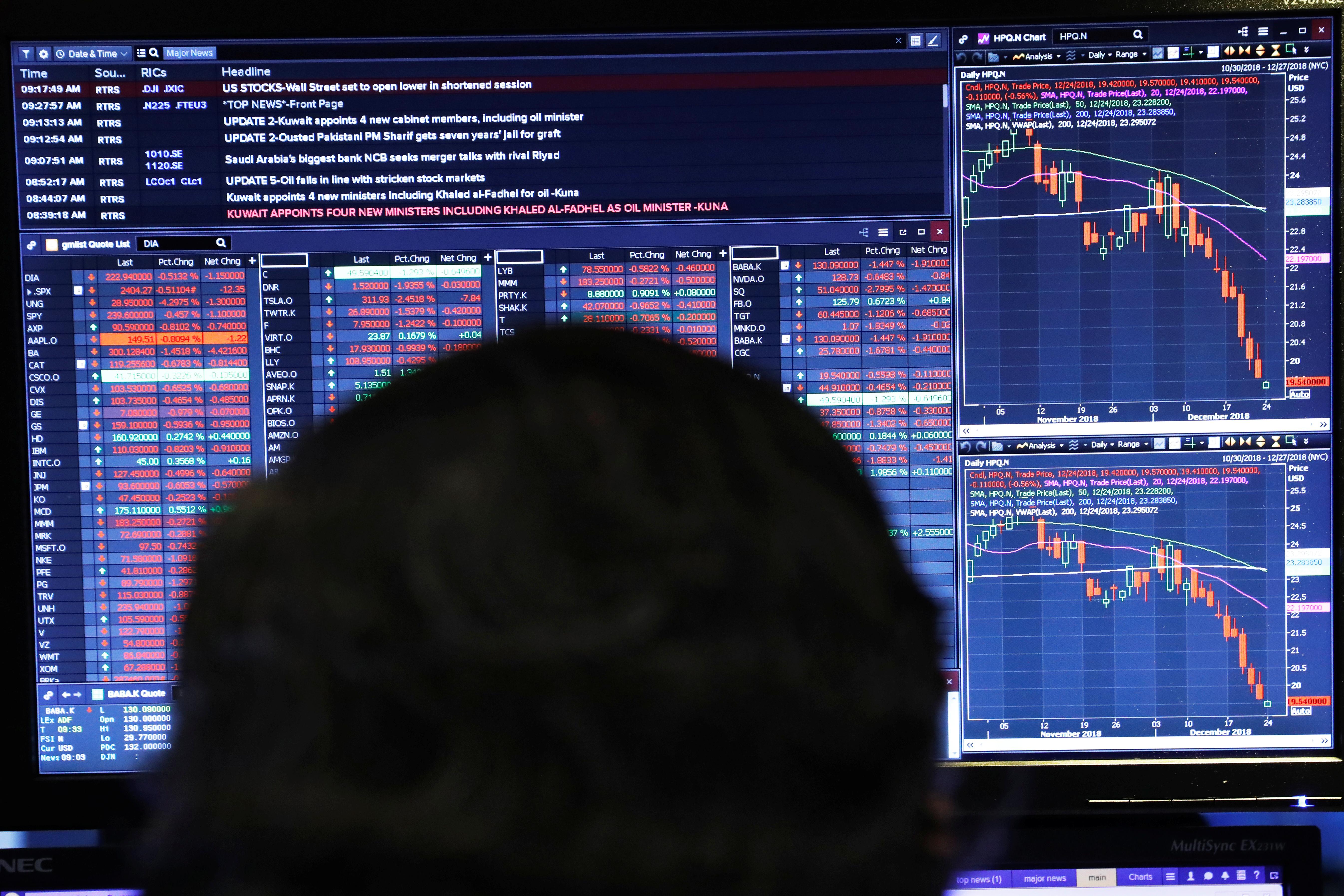 All the 11 major S&P 500 .SPX sectors were lower, and all the 30 components of the Dow Industrials .DJI were in the red, pushing them closer to bear territory. However, trading volumes are expected to be muted, with markets closing at 1:00 p.m. ET ahead of the Christmas holiday, and could exaggerate movements.

“Volumes will be greatly reduced on a day like today and the twist is we have a lot of things going on. It will be interesting to see how the market digests all of this in a three-and-a-half hour session,” said Andre Bakhos, managing director at New Vines Capital LLC in Bernardsville, New Jersey.

“The main factor on investors’ minds is the government shutdown and what the resolution can be. It’s really fear of the unknown that has given investors grief.”

With the equity markets in free fall, Treasury Secretary Steven Mnuchin spoke with the chief executive officers of the six largest U.S. banks, who confirmed they have enough liquidity to continue lending and that “the markets continue to function properly.”

Mnuchin’s plan to convene a call with the President’s Working Group on financial markets also unnerved investors. The group, formed after the stock market crash of October 1987, is known more commonly as the “Plunge Protection Team” and met in 2009 in the latter stages of the financial crisis.

“We’re in a turbulent time and it will be interesting to see how we end the year. But right now, it certainly looks like Santa Claus isn’t coming to town,” Barkhos said.

A bruising December for the U.S. markets – triggered by concerns over a partial federal government shutdown, the U.S.-China trade dispute and interest rate hikes – has put the S&P 500 .SPX on pace for its biggest monthly percentage decline since 2008.

At the end of Friday’s session, the Nasdaq was down nearly 22 percent from its record high close in late August and formally in a bear market. The S&P and Dow are also not far off those levels, having sunk 17.5 percent and 16.3 percent, respectively, as of Friday from their closing highs.

The drop in markets picked up last week after the Federal Reserve raised rates for the fourth time this year and said it would largely continue with its rate hike path and slim down its vast holdings of bonds, draining the easy money that has helped power the stock market’s decade-long bull run.

President Donald Trump has criticized the Fed for raising rates and reports over the weekend suggested he had privately discussed firing Fed Chairman Jerome Powell. Mnuchin later said Trump does not believe he has the power to remove Powell.