LONDON (Reuters) – World stocks clung to recent gains on Monday following healthy advances in Asia on hopes for a U.S.-China trade deal, a more optimistic growth outlook and a softer dollar, while the euro climbed to a 4-1/2 month high. 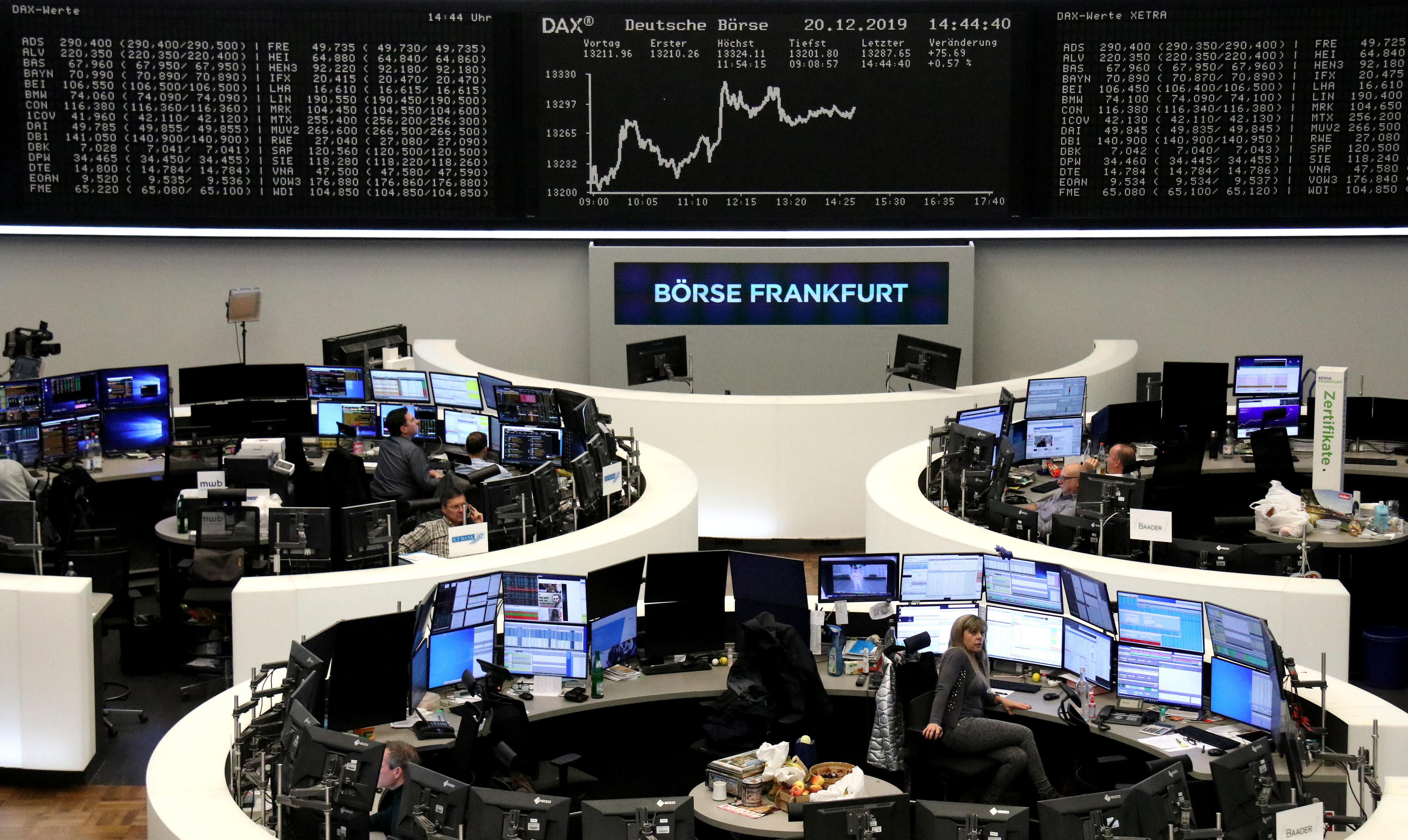 The pan-regional Euro Stoxx 600 STOXX was down 0.3% while Germany’s DAX .GDAXI slipped 0.5%. Banks .SX7P, which had been lagging the 2019 rally, were the only sector to mark small gains in thin year-end trading.

“Investors appear to be growing a tad apprehensive about chasing the record setting U.S. equity market risk-reward premise into year-end,” Stephen Innes at AxiTrader wrote in a note to clients. “Much focus continues to fall on the abundance of liquidity offered up by the Fed as a critical driver behind the late-season equity market window dressing.”

Many Asian bourses had marked healthy gains with Chinese blue chips .CSI300 roaring 1.5% higher, bolstered by a report that 2019 retail sales are forecast to rise 8% and expectations that a new benchmark for floating-rate loans could lower borrowing costs and boost flagging economic growth.

Easing trade war worries have offered a lift to global equities this month, putting MSCI’s global equity index .MIWD00000PUS on track for a 3.8% rise in December – its fourth straight month of gains.

In currency markets, the dollar index – measuring the currency against a basket of rivals – weakened 0.1% to 96.793 .DXY in its third straight session in the red. Thin end-of-year volumes exacerbated the broad weakness in the greenback which on Friday suffered its biggest one-day fall since June.

“The U.S. dollar is the worst performing G10 currency overnight,” said MUFG’s Fritz Louw. “The main drivers of the weaker dollar have likely been risk appetite holding up in the wake of comments from the U.S. pertaining to a Phase One trade deal recently as well as the U.S. Federal Reserve’s continued repo operations.”

The weak greenback helped other currencies shine. The euro climbed as high as $1.1211 EUR=, its strongest level since mid-August. Sterling also benefited, rising 0.2% to $1.3122 GBP= against the dollar. Yet the pound was flat against the euro at 85.38 pence amid concerns that Britain could be headed for a disruptive “hard Brexit” at the end of 2020.

China’s yuan held below the key level of 7 per dollar, rising in offshore markets to 6.9752 CNH=, its highest since Dec. 13.

Oil prices held near three-month highs with traders also keeping a close watch on the Middle East following U.S. air strikes in Iraq and Syria against Kataib Hezbollah, an Iran-backed militia group. U.S. officials said on Sunday that the attacks were successful, but warned “additional actions” may be taken to defend U.S. interests.

Oil prices were also supported by a bigger-than-expected decline in crude inventories in the United States, the world’s biggest fuel consumer. Stockpiles fell by 5.5 million barrels in the week to Dec. 20, far exceeding a 1.7-million-barrel drop forecast in a Reuters poll, government data showed on Friday.