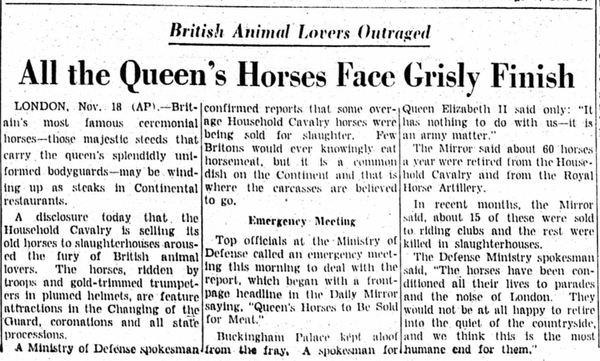 LONDON, Nov. 18 (AP) — Britain’s most famous ceremonial horses — those majestic steeds that carry the queen’s splendidly uniformed bodyguards — may be winding up as steaks in Continental restaurants.

A disclosure today that the Household Cavalry is selling its old horses to slaughterhouses aroused the fury of British animal lovers. The horses, ridden by troops and gold-trimmed trumpeters in plumed helmets, are feature attractions in the Changing of the Guard, coronations and all state processions.

A Ministry of Defense spokesman confirmed reports that some over-age Household Cavalry horses were being sold for slaughter. Few Britons would ever knowingly eat horsemeat, but it is a common dish on the Continent and that is where the carcasses are believed to go.

Top officials at the Ministry of Defense called an emergency meeting this morning to deal with the report, which began with a front-page headline in the Daily Mirror saying, “Queen’s Horses to Be Sold for Meat.”

Buckingham Palace kept aloof from the fray. A spokesman for Queen Elizabeth II said only: “It has nothing to do with us — it is an army matter.”

The Mirror said about 60 horses a year were retired from the Household Cavalry and from the Royal Horse Artillery.

In recent months, the Mirror said, about 15 of these were sold to riding clubs and the rest were killed in slaughterhouses.

The Defense Ministry spokesman said, “The horses have been conditioned all their lives to parades and the noise of London. They would not be at all happy to retire into the quiet of the countryside and we think this is the most humane end for them.”