PARIS — Two people were wounded by a knife-wielding assailant in Paris on Friday near the site of the former Charlie Hebdo office — the scene of a 2015 terrorist attack targeting the satirical newspaper — the authorities said.

“An attack with a bladed weapon was carried out in the 11th arrondissement in front of the former offices of Charlie Hebdo,” Jean Castex, the prime minister, said as he cut short a scheduled speech.

A suspect was arrested a short time later in the Bastille neighborhood, an area in Paris not far from the site of the attack, according to the police. The person was not immediately identified and it was unclear how he or she was linked to the attack. The office of France’s antiterrorism prosecutor said on Friday that it had opened an investigation.

The authorities initially gave a higher number for people injured, revising it later on Friday.

Emmanuel Grégoire, the deputy mayor of Paris, in a post on Twitter urged people to avoid the Richard-Lenoir neighborhood — where Charlie Hebdo had its offices before the terrorist attack in January 2015 that left 12 people dead.

The two victims were employees of Premières Lignes, a documentary production company that used to be neighbors with Charlie Hebdo. Some of its employees were the first witnesses to the January 2015 attack.

Paul Moreira, a journalist and filmmaker at Premières Lignes, told the BFM TV news channel that the two employees were on the street in front of the building shortly before noon on Friday when an assailant attacked them with a “kind of meat cleaver.”

One witness, identified only as Fabien, told BFM TV that he was working in his office when, shortly before noon, he heard screaming in the street and leaned out of the window.

“I saw a young woman with a huge head wound, blood was running all over her face,” he said, adding that he did not see any assailants. 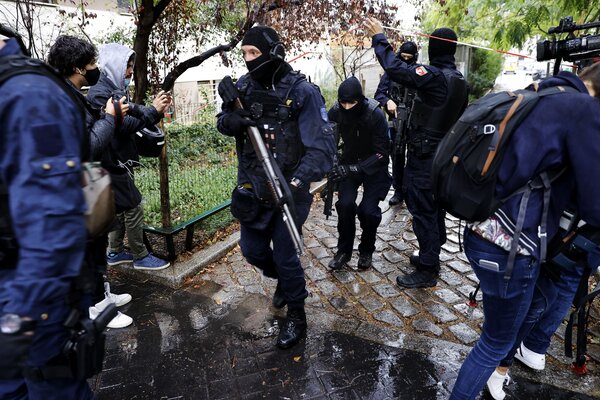 François Vauglin, the mayor of the 11th arrondissement, told BFM TV that he had asked schools and day care centers in the area to go on lockdown as a precautionary measure.

Al Qaeda, the terrorist group, had recently issued new threats against Charlie Hebdo, which moved after the 2015 attack to highly secured offices elsewhere. The threats followed the newspaper’s decision to reprint satirical cartoons of the Prophet Muhammad at the opening of the trial of several people accused of aiding the assailants.

In the 2015 attack, two brothers, Chérif and Saïd Kouachi, stormed into the building that housed the satirical newspaper and fatally shot a maintenance worker. The brothers then forced at gunpoint a cartoonist, who had just stepped outside, to enter a security code to access the offices.

The gunmen entered as journalists were holding a weekly news meeting and opened fire with semiautomatic rifles, killing 10 people and critically injuring four others. They left the building less than two minutes later and shot and killed a police officer who tried to stop them as they fled. After a two-day manhunt, the Kouachi brothers were killed in a shootout with the police in a small town north of Paris.

Populists looking to cause upsets as EU elections begin