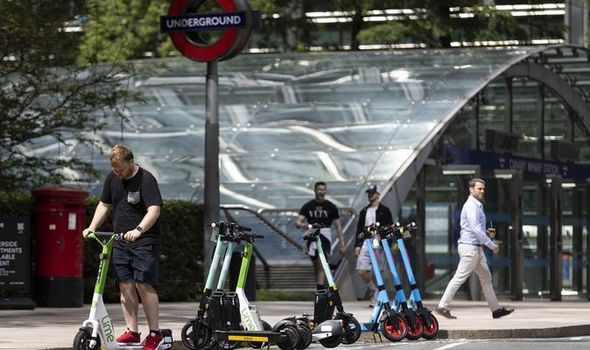 David Ackers, 74, died on New Year’s Day after crashing a relative’s E-scooter into two parked cars in Tameside, Greater Manchester. He died at the scene. The National Federation of the Blind UK says E-scooters are simply too dangerous for public roads and pavements. Spokeswoman Sarah Gayton said: “E-scooters are not stable, they are not roadworthy, they are literally unsafe. The number of accidents is horrendous.”

It has lobbied about the public nuisance and dangers they create for pedestrians, people using mobility aids and cyclists. Ms Gayton added: “For the visually impaired they are an absolute nightmare. It’s terrifying. These vehicles can infiltrate every single place a pedestrian goes – the pedestrian has no safe place to walk anymore.”

The tragedy comes as a series of road traffic experts have expressed increasing fear over the high-powered rides. Motoring lawyer Nick ‘Mr Loophole’ Freeman, known for defending celebrity traffic and speeding cases, has campaigned on the issue of E-scooter safety calling them “a risk to all road users”.

He said: “They have small wheels, no indicators and there’s no requirement for users to pass any kind of proficiency test. Clearly, they are here to stay. That’s why urgent changes to the law must be made.”

Rebecca Young, Mr Ackers’s granddaughter, described him as the “most amazing, most generous” man. The father of two had four grandchildren and three great grandchildren. Rebecca wrote: “My grandad, my best friend, the most amazing, most generous, caring, selfless man in the world. You don’t even realise how much your whole family worship and love you.”

Recent data revealed that between January and October last year there were nine deaths involving E-scooters and 300 serious injuries.

The Parliamentary Advisory Council for Transport Safety estimates there are 500,000 E-scooters in the UK and some 50 local authorities have introduced official trial rental schemes. Legally, the only E-scooters that can be used on public roads are those rented via government-backed trials.

THE tragic death of David Ackers is the result of a Government which burnishes its green credentials at an appalling cost to human life.

Ministers trumpet that E-scooters are environmentally friendly – a planet-sparing way to commute. The fact they’re a menace is swept aside.

Thanks to inherent flaws in their design and lack of adequate laws, E-scooters put every user in danger.

They are a risk to all road users as well as hapless pedestrians who get in their way. Yet, not only does the Government ignore the statistics – at least one person is injured on an E-scooter each day – it pushes its green-pleasing agenda, even deploying underhand gestures to get us on these hazardous two-wheelers. Take the use of helmets. The Government has quietly changed the law to exempt E-scooter riders from wearing them.

Clearly, they are here to stay. That’s why urgent changes to the law must be made. Existing regulation is inadequate. Meanwhile, we have spiralling use of illegal E-scooters – and another family plunged into grief and despair.

North London abductions and rapes: Image of car and description of attacker released