ROME — Martin Adler was a 20-year-old private first class in the 339th Infantry regiment in 1944 when he and a fellow soldier went door to door in an Italian town looking for German troops.

They entered a house and saw a large basket. It was moving. Assuming they had found what they were looking for, they prepared to fire, screaming at whoever was inside to come out. Suddenly, a woman ran into the room yelling at them to stop. The top popped off the basket, and three small children emerged.

The two American soldiers began laughing in relief. The meeting was memorialized in a photograph with Mr. Adler and the children in their “Sunday best.”

When Mr. Adler’s daughter, Rachelle Adler Donley, was looking recently to bolster him after months of quarantine, the photo was where she turned.

“I was looking for ways to cheer him up,” Ms. Adler Donley, a former art director for a book publisher, said of the search for the children. The past year, she added, had been “really, really, hard” on her father, who lives in a retirement community in Florida, where he has been apartment-bound with his wife, Elaine, 89, since March.

“I thought, let me post this and see if there’s a chance,” she said.

The photo caught the attention of Matteo Incerti, the author of several books about World War II, including one published this year on the history of the Indigenous people of Canada and the United States in the Italian campaign. Mr. Incerti was familiar with war records, and he quickly tracked down the position of Mr. Adler’s company in the fall of 1944, along the Gothic Line in the Apennine Mountains, which crossed the regions of Tuscany and Emilia Romagna. But he wasn’t sure about the exact location.

He asked for help on social media, and got local journalists on board. Articles were published in city newspapers in central Emilia-Romagna. Last weekend, TG1, the main 8 p.m. news program of Italy’s principal television station, Rai 1, broadcast a segment with the appeal.

Bruno Naldi, 83 and living in Castel San Pietro Terme, near Bologna, said his niece had seen the photograph on TV and had immediately called Giuliana — Mr. Naldi’s sister — to say: “It’s you.” The next day he met with his sisters, Mafalda, 81, and Giuliana, 79, and they agreed that the three of them were indeed the children in the photograph.

Mr. Incerti put them in touch with Mr. Adler in Florida, and they all reunited virtually last week, an event broadcast on TG1.

“We said hello to each other,” Mr. Naldi said of his encounter with Mr. Adler, who is heard in the TG1 video saying “cioccolato,” “bambini,” and “ciao.” 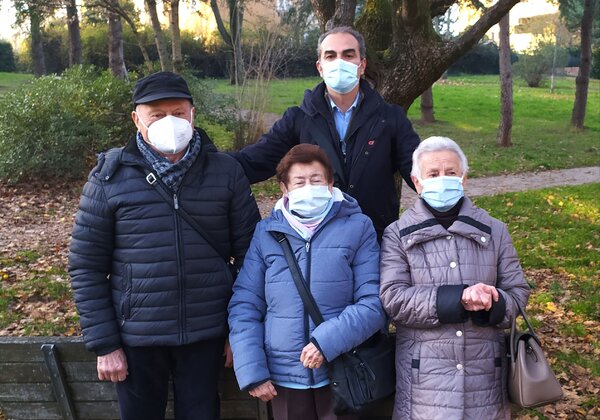 Mr. Naldi said he did not remember his previous encounter with Mr. Adler, which turns out to have taken place in the town of Monterenzio, southeast of Bologna, where his family lived during the war. They later moved to Castel San Pietro Terme, where all three siblings still live.

His memories of the war were dim, Mr. Naldi said. He remembered cannons in the courtyard and American soldiers giving them candies, chocolate and cookies. “When you’re 7” that’s what you remember, he said.

He said his mother, Rosa Minarini, never said anything about the American soldier who had taken a photograph of them — and nearly killed them. Or maybe she had, and he had just forgotten, he said: “We didn’t speak much about these things.”

Ms. Adler Donley said that until five years ago her father hadn’t spoken much about his war years, either.

“Growing up, there were very few stories he would tell,” and the story of the children was “one of them,” she said in an interview from her home in North Carolina. “He would always tell this story with such joy.” His other war stories mostly brought on nightmares, she said.

Mr. Adler always described his meeting with the children as “the happiest moment of the war, the only happier moment was when the war ended,” Ms. Adler Donley said. “That smile in that picture is so genuine,” she said.

After the war, Mr. Adler received a degree in social work, working with veterans, and then became director of the Helen Keller National Center for Deaf-Blind Youths and Adults in Sands Point, N.Y. “He spent his whole life helping people,” she said. He and his wife moved to Florida five years ago.

Mr. Adler said he had been “very excited” to speak to the Naldis. Over the years, he said in a telephone interview, he had often thought about them.

“I keep wondering what happened to these kids,” he said, laughing when he remembered they were in their late 70s and early 80s.

The Naldi siblings have become media celebrities here in Italy, a spot of good news in a country hit especially hard by the coronavirus. Mr. Naldi said his phone had rung so much it “was burning.” Mafalda, his sister, said she couldn’t wait for the media interest to pass. “Even the stones are talking about us,” she said.

Mr. Naldi said Mr. Adler told them that once it was safe to travel again, he wanted to come to Italy, “to see where he was during the war, and to come and meet us to hug us,” he said. “I was fine when we spoke on Monday afternoon, but when I saw it again on TV I cried,” he said.

Ms. Adler Donley said the reunion was emotional on her family’s end also.

“I think my father is really feeling the love, and he and the rest of the veterans who fought in the Italian campaign really deserve the recognition,” Ms. Adler Donley said. “He’s always said to me, for as long as I can remember, I want to be the last World War II veteran alive.”

What is the UK weather forecast for tomorrow?