LANY, Czech Republic — In a region long fought over by rival ethnic and linguistic groups, archaeologists in the Czech Republic have discovered something unusual in these turbulent parts: evidence that peoples locked in hostility for much of the modern era got along in centuries past.

A few yards from a Czech Army pillbox built as a defense against Nazi Germany, the archaeologists discovered a cattle bone that they say bears inscriptions dating from the sixth century that suggest that different peoples speaking different languages mingled and exchanged ideas at that time.

Perhaps fitting for a such a fractious region, the find has set off a furious brawl among academics and archaeologists, and nationalists and Europhiles, about what it all means.

The bone fragment, identified by DNA analysis and carbon dating as coming from the rib of a cow that lived around 1,400 years ago, was found in a Slavic settlement in 2017, said Jiri Machacek, the head of the archaeology department at Masaryk University in the Czech city of Brno. But in what is considered a major finding, a team of scholars led by Dr. Machacek recently concluded that the bone bears sixth-century runes, a system of writing developed by early Germans.

“It shows that they were trying to communicate with each other and were not just fighting all the time,” Dr. Machacek said.

It is unclear whether the runes were inscribed by a person of Germanic origin living alongside Slavs or engraved by a Slav who knew Germanic runes. (Slavs did not have their own system of writing until three centuries later.) 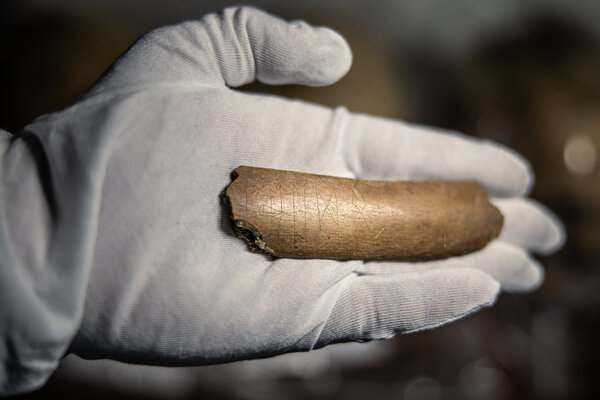 Either way, Dr. Machacek said, they indicate that different peoples who were living in what is now an eastern corner of the Czech Republic known as Moravia interacted in ways that were not previously known.

“It is very symbolic that we found it so near that thing,” Dr. Machacek said, pointing to the moss-covered military blockhouse left from World War II, when Germany conquered Slavic lands whose people Hitler viewed as “subhumans.”

Although dedicated to unearthing the distant past, archaeology has long been a field freighted by very current concerns. Nineteenth-century nationalists, the Nazis and Soviet communists have all abused it to justify and promote their causes.

“Like everything else in Central Europe, this is not simply an academic debate,” said Patrick J. Geary, a scholar of medieval history at the Institute for Advanced Study in Princeton, N.J. “Nationalists and nativists have long argued both about the origins of the Slavs and every aspect of Slavic prehistory.”

Because past and present are so intertwined, the runic bone discovered in Lany has stirred passionate debate, with some nationalist-inclined Czechs denouncing it as an effort to undermine national identity in service of the European Union, a project founded on the idea that Europeans must and can get along. One of the members of the team who identified the markings as German runes even received death threats.

“If we Czechs have a culture, it must never be said that we have it from the Germans, but it must be said that we have it in spite of the Germans,” Stanislav Jahoda, a self-declared patriot, wrote in an online discussion hosted by a leading Czech newspaper. Others dismissed the archaeological excavation as a European Union propaganda project to counter widespread Czech hostility. (A survey last year found that 57 percent of Czechs think E.U. membership is destroying their country’s identity.)

Anger has spread beyond the Czech Republic to foreign scholars who reject the possibility that Slavs wrote anything down before two Greek monks, Cyril and Methodius, arrived in Moravia in the ninth century and created a system of writing that later developed into the script known as Cyrillic. Variations of Cyrillic are now used in Russia, Ukraine, Bulgaria and Serbia.

The idea that early Slavs could have used Germanic runes upsets the view of a sharp dichotomy between the two cultures, a split that has underpinned nationalist passions on both sides — in Germany and Slavic countries — since the 19th century. Runes have been viewed as particularly toxic in Slavic lands since World War II, when the Nazi paramilitary force, the SS, used stylized runes as its insignia.

“The long animosity between Slavs and Germanic peoples leaves some quite eager to insist that the Slavic culture owed nothing to Germanic culture and that there could not have been any mixing or contact between the earlier Germanic population of the region and the later Slavs,” Professor Geary said.

In a recent interview with Bulgarian state television, Anna-Maria Totomanova, an academic at the Department of Cyril and Methodius Studies at Sofia University, denounced the Czech archaeologists as charlatans. “At first I was angry, but then I found it laughable,” she said.

Runes, she said, “are Germanic,” adding that it was not possible that a Slavic people would have used them to write anything down before they got their own alphabet thanks to the monks.

Western scholars generally believe that Czech archaeologists correctly identified the incisions on the bone as runes, but some question whether the people living in the area in the sixth century were Slavs.

“The origins and diffusion of Slavs remains one of the great mysteries of the first millennium,” Professor Geary said.

The consensus view until recently was that early Slavs moved into Central Europe from an original homeland farther east in the middle of the first millennium and took over vast tracts of lands previously inhabited by Germanic tribes, who migrated elsewhere after the collapse of the Roman Empire.

Florin Curta, a professor of history and archaeology at the University of Florida, said there “can be no doubt” that the marks on the Lany bone are Germanic runes and that this constitutes a “very important discovery.” But he questioned the Masaryk University team’s view that the people who lived in Lany when the bone was incised were Slavs who had migrated into the area. More likely, he said, is that they were locals who spoke and wrote a Germanic language.

Long and often bitter arguments over the origins of the people now called Slavs because of their shared linguistic roots have been complicated by the fact that Slavic scholars have, since the rise of nationalism in the 19th century, often tried to tie the earliest Slavs to their own homelands and present their own countries as the true motherland of Slavic culture.

“This is a problem for our identity,” Dr. Machacek said. “Every society needs myths about its beginnings and likes to think of itself as special.”

When the Lany bone was first unearthed in July 2017 it attracted little attention. “It was nothing special, just another old bone,” recalled Petr Dressler, a Czech scholar who supervised the dig.

Later, however, a graduate student in archaeology, Alena Slamova, noticed unusual scratching on it, prompting three years of investigation that led this past February led to a groundbreaking article by Czech, Austrian, Swiss and Australian scholars in the Journal of Archaeological Science.

The scratching, according to the Masaryk University team, turned out to be runic lettering, an ancient alphabet that was used by Germanic tribes before the adoption of the Latin script.

Inscribed on the bone are six of the last eight runes from a 24-letter alphabet known as Old Futhark, the oldest runic alphabet used by Germanic tribes during the first half of the first millennium.

Unlike Germanic tribes, who used runic lettering as early as the first century, speakers of Slavic tongues in places like Moravia, the site of an early Slav polity known as Great Moravia, were not thought to have had a written language until the ninth century.

“Suddenly, because of an archaeological find, the situation looks different,” said Dr. Machacek. “We see that people from the very beginning were connected, that Slavic people used runes” developed by early Germans, or at least had contact with them.

That Slavs also used or intermingled with people who used Germanic runes long before the arrival of the Greek monks who created Cyrillic, he added, upsets a conviction entrenched over centuries that Slavic culture developed separately from that of Germanic peoples and rests on its unique alphabet.

That was a major factor in the uproar that greeted the Masaryk University group’s findings.

Zuzana Hofmanova, a member of the Brno team who analyzes ancient DNA, said she recently received an anonymous message denouncing her and fellow scholars working on the inscribed sixth-century bone as traitors who deserved to be killed.

“Archaeological information can sometimes be misconstrued by people searching for ethnic purity,” she lamented.

Covid rates: The 65 areas with increasing coronavirus cases – is yours one?