And so the presidency of Donald Trump draws to a close with a French leader obliged to declare his faith in the resilience of American democracy, a remarkable development. Mr. Macron’s wider point was clear enough: The mob of Trump loyalists in Washington attempting to disrupt the peaceful transition of American power also posed a threat to all democracies.

The reputation of the United States may be tarnished, but its identification with the global defense of democracy remains singular. So, when an angry horde, incited by President Trump himself, was seen taking over the Capitol, defiling its sacred chambers with swaggering contempt as lawmakers gathered to certify President-elect Joseph R. Biden Jr.’s victory, the fragility of freedom felt palpable in Paris and across the world. 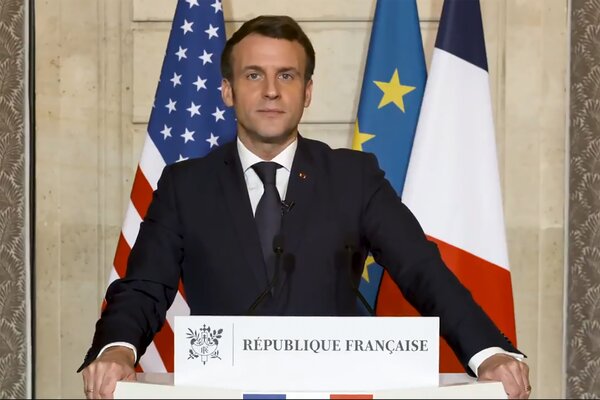 “A universal idea — that of ‘one person, one vote’ — is undermined,” Mr. Macron said in an address that began in French and ended in English. It was the “temple of American democracy” that had been attacked.

The institutions of democracy prevailed in the early hours of the following morning, but the images of mob rule in Washington touched a particular nerve in fractured Western societies. They have been confronted with the emergence of an illiberal authoritarian model in Hungary and Poland, and the rise of rightist political forces from Italy to Germany. They have also faced the truculence of leaders like President Vladimir V. Putin of Russia, who has declared liberalism “obsolete,” or Xi Jinping, China’s top leader, who has offered his country’s surveillance-state model to the world as he crushed democratic protest in Hong Kong.

“For European societies, these were shattering images,” said Jacques Rupnik, a political scientist. “Even if America was no longer the beacon on a hill, it was still the pillar that sustained European democracy and extended it eastward after the Cold War.”

Chancellor Angela Merkel of Germany said she was “angry and sad.” She blamed Mr. Trump unequivocally for the storming of the Capitol that left one woman dead. “Doubts about the election outcome were stoked and created the atmosphere that made the events of last night possible,” she said.

Germans, for whom the United States was postwar savior, protector and liberal democratic model, have observed Mr. Trump’s attempts to subvert the democratic process and rule of law with particular dismay.

Their anxiety has been accentuated in recent years because the fraying of democracy through polarization, violence, social breakdown and economic hardship has not been confined to the United States. The coronavirus pandemic has sharpened anxieties and mistrust of government. In this context, the mob stampeding through the Capitol seemed to reflect disruptive forces lurking in many parts of the Western world.

Last year, as battles over racial justice raged in several American cities, the German weekly magazine Der Spiegel portrayed Mr. Trump in the Oval Office with a lighted match and called him “Der Feuerteufel,” or literally, “The Fire Devil.”

The message was clear: The American president was playing with fire. This could only stir German memories of the Reichstag fire of 1933 that enabled Hitler and the Nazis to scrap the fragile Weimar democracy that brought them to power.

Painful memory has not been confined to Germany. Throughout much of Europe — a continent where totalitarian rule is not some distant specter, but something people alive today have lived — Mr. Trump’s attacks on an independent judiciary, a free press and the sanctity of the ballot were long seen as ominous.

Ms. Merkel herself started life in Communist East Germany. She has watched as the post-1989 euphoria over the inevitability of a free democratic world has evaporated, deflated by the rise of authoritarian governments. Mr. Trump, attacking foundations of that world like NATO or the European Union, often appeared to want to tilt the world in the same illiberal direction.

He has been defeated. American institutions have withstood the mayhem. Mr. Biden’s victory was duly certified by Congress once order was restored.

Vice President Mike Pence, whom Mr. Trump had tried to enlist in his effort to overturn the November election result, affirmed Mr. Biden as the winner. Mr. Trump issued a statement saying, for the first time, that there will be “an orderly transition on January 20th.” Two victories in Senate races in Georgia ensured that Democrats will control the Senate, a stinging final rebuke to Mr. Trump that opens the way for the new president to pursue his agenda.

So, all is well after all? Not really. The American idea and American values — democracy, the rule of law, the defense of human rights — have suffered a sustained assault during Mr. Trump’s presidency. Mr. Rupnik suggested it would be “very difficult” for Mr. Biden to project America as “the convener of a community of democracies,” an idea the incoming administration has aired to signal a return to America’s core principles.

For some time, the rest of the world will look on the United States with skepticism when it seeks to promote democratic values. The images of the overrun Capitol will be there, for those who want to use them, to make the point that America would be best advised to avoid giving lessons in the exercise of freedom. Dictators of the hard and soft variety have new and potent ammunition.

“Democracy Fractured,” was the banner headline in the French daily Le Figaro, above a photograph of the Capitol under siege. An editorial suggested that Mr. Trump might have left office with “a contested but not negligible balance sheet.” Instead, “his narcissism having overcome any dignity, he manhandled institutions, trampled on democracy, divided his own camp and ends his presidency in a ditch.”

There were signs that Mr. Trump’s magnetism is already ebbing. The Czech prime minister, Andrej Babis, a supporter of Mr. Trump, promptly changed his Twitter profile picture from one showing him wearing a MAGA-style red baseball cap with the words ‘Silné Česko’ (Strong Czech Republic), to one that shows him wearing a face mask with the Czech flag.

The Washington turmoil illustrated in the end that the United States is bigger than one man, a point Mr. Macron seemed intent on making. He alluded to joint American and French support for freedom and democracy since the 18th century. He mentioned Alexis de Tocqueville’s praise of American democracy. He spoke of American defense of French freedom during two World Wars.

Mr. Macron’s message seemed clear. The America of “We the People,” the America that held it self-evident at its creation that “all men are created equal,” was still needed, and urgently, for “our common struggle to ensure that our democracies emerge from this moment that we are all living through even stronger.”