Late Thursday night, Sisters Uncut, a provocative feminist organization that has emerged as a leader of the most forceful protests in Britain’s growing national movement around women’s safety, declared a small victory.

“We’ve delayed the #PoliceCrackdownBill,” the group announced on Twitter. “This is a victory, but we will not stop.”

The announcement was just the latest evidence that this movement differs from past campaigns that opposed violence against women in general terms but that rarely made sweeping demands.

Women are furious not just about the death of Sarah Everard, 33, in London — a police officer has been charged in her kidnapping and killing — but about what they see as a heavy-handed and misogynist response from the police afterward. They are directing their anger at law enforcement and the justice system, and pushing to scrap a proposed police and crime bill, which would create sweeping new restrictions on protests and grant broad new powers to the police.

That position may seem contradictory to some. The police, after all, are often seen as protectors of public safety. When the international Black Lives Matter movement has led to calls to defund or even abolish the police, opponents are quick to cite women’s safety from rape and assault as a reason the police must be preserved.

But if Ms. Everard’s death convinced many women in Britain that the police were failing to protect them, the violent police action a few days later at a London vigil in her honor, along with the arrest of a police officer over her killing, have led many to conclude that the police are an active threat. Women’s safety and freedom, they argue, can come only from much deeper social changes — and any policy change in response to Ms. Everard’s death should focus on those.

Margaret Atwood famously said that there was nothing in her novel “The Handmaid’s Tale” that did not happen to women somewhere, at some point in history. That is often treated as evidence of in-depth sourcing, but in fact it is the force behind the novel’s visceral central horror: that any protection women might think would be offered by democracy, education, wealth or race can all too easily disappear in an instant.

For many women in Britain, Ms. Everard’s killing and the police’s violent dispersal of a London vigil in her memory have triggered a similar horror, on a less dystopian scale, about how unprotected they truly are. It has become a moment, too, to reflect on the suffering of women of color, and other groups targeted for abuse, that has long been ignored. 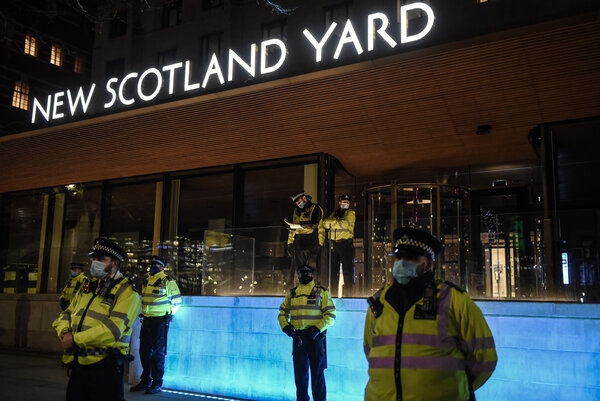 Raven Bowen, the chief executive of Ugly Mugs, a group that works to prevent violence against sex workers, said she believed that when the police broke up the vigil for Ms. Everard on Clapham Common last weekend, the women there got “a taste” of the kind of trauma many sex workers have reported experiencing at the hands of the police for years.

She believes that such experiences have a cumulative effect. “When they do ask for protection, what do they get?” Ms. Bowen asked rhetorically. “That becomes a learned experience.”

Lydia Caradonna, a writer and sex worker, said that she had often encountered the idea that women like herself were not entitled to police protection because “we’ve sacrificed the part of our womanhood that keeps us safe, the part that makes us worthy of protection.”

That, she believes, is why Ms. Everard’s death has sent such shock waves. “There’s this idea about proper womanhood,” she said. “That Sarah was a proper woman, she did what she was supposed to, she dressed the way she should” — but none of that was enough to keep her safe.

“It can also be quite a shattering of self when you realize that you did do things right and you still got assaulted,” said Nicole Westmarland, a Durham University researcher who studies violence against women. “That’s what’s happened on a mass international scale, really.”

Rape ‘has been decriminalized’

As public anger grew after the killing of Ms. Everard, the government promised new actions to improve women’s safety: more CCTV cameras, better street lighting, and plainclothes police in bars and clubs to watch for attacks on female patrons. And it campaigned for more support for the police and crime bill, which would grant sweeping new powers to police departments across the country.

All those responses seemed grounded in the theory that women felt unsafe because there were not enough police, with enough power, in enough places.

But for many women expressing fear and outrage, especially those at events organized by Sisters Uncut, that was precisely backward. In their view, the police were themselves a source of trauma and danger. And giving them more powers would only leave women more vulnerable.

Ms. Everard’s death was a single tragedy, and the police action in Clapham last weekend was against one protest. But statistics tell a story of many more widespread failures.

From 2019 to 2020, less than 3 percent of rapes reported to the police were prosecuted, according to government statistics. And if unreported cases are taken into account, the real prosecution rate is even lower.

“Rape has been decriminalized, frankly,” said Emily Gray, a lecturer at Derby University who studies policing.

A 2019 report by the British newspaper The Independent found that 568 London police officers were accused of sexual assault between 2012 and 2018, but only 43 faced disciplinary proceedings. And from April 2015 to April 2018, there were at least 700 reports of domestic violence by police officers and police staff, according to documents obtained by the Bureau of Investigative Journalists from 37 of Britain’s 48 police forces.

Opponents of the police and crime bill, which would grant the police wide-ranging power to shut down protests, argue that it would make scenes like the one on Clapham Common more frequent, and would not stop the most prevalent forms of violence against women.

“Violence against women usually comes from a power imbalance,” Dr. Gray said. One reason the police bill is being attacked, she said, is that “it doesn’t do anything about that at all.”

So what are the alternatives? Different groups tend to focus on different remedies.

Sisters Uncut, which was founded in 2014 in response to government austerity measures that slashed funding for women’s shelters and other help for women at risk, has long demanded that such services be reinstated.

Perpetrator programs, which work intensively with abusive men to prevent them from attacking their partners, have shown some promise in cases where the abusers are committed to change, said Dr. Westmarland, who has studied them.

“The physical and sexual abuse reduced quite substantially and in some cases was eliminated altogether,” she said. But she noted that the programs had not been effective at reducing coercive control — the domineering emotional abuse that is the hallmark of domestic violence and that is deeply traumatic in its own right.

One belief that cuts across nearly all the groups involved — including mainstream ones like the Women’s Institute, the largest women’s organization in the country — is that education must be a centerpiece of any change.

Such education could be “a real shot at prevention, and shaping some of the prevalent attitudes that greatly hurt girls and women, as well as nonbinary people, in our society,” said Kate Manne, a professor of philosophy at Cornell University and the author of two books on the ways sexism shapes society, said in an interview.

But while education might sound like the kind of anodyne concept that anyone could support, Dr. Manne said via text message that she believed it would actually be quietly radical for education to address the politically charged issues of misogyny, male privilege and male responsibility for ending male violence.

“Can you imagine if sex education became political?” she asked. “Sigh. It’s my dream, though.”