Campaigners who fear American chlorine-washed chicken and hormone-fed beef could be sold in British shops are pushing for changes to the Agriculture Bill currently going through parliament.

The bill reaches the House of Lords today, where some peers will attempt to win concessions from the government.

Last month MPs voted against an amendment that would have compelled ministers to apply current UK food and farming standards to future deals on international trade.

Vicki Hird, from Sustain, an alliance campaigning for better food and farming, claims the omission could force down British standards as deals are made in trade talks.

“What we could see is our farmers having to compete with lower standard imports,” she told Sky News.

“Or we’ll see a weakening of those standards in order that they can compete, and society does not want lower standards.” 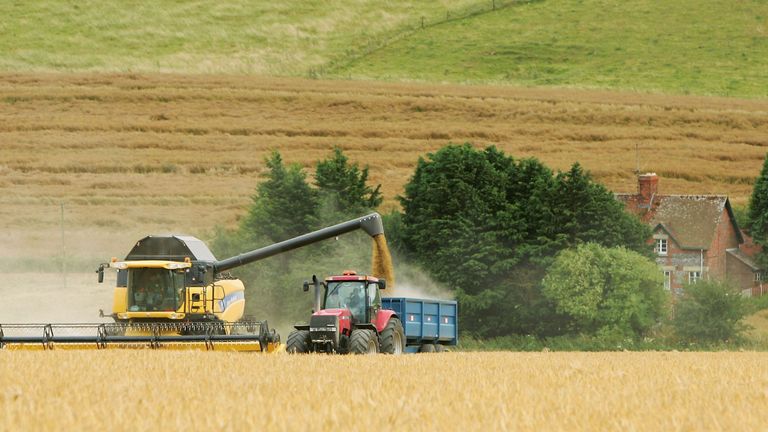 The Agriculture Bill will shape the future of farming in the UK, replacing the EU subsidy system based on the size of each farm with one that promotes food production at the same time as requiring farmers to manage their land for the public good.

The £3bn a year paid to farmers will be handed over in exchange for public benefits including environmental improvements, increased public access, and measures to reduce flooding.

Upland farming, which relies heavily on taxpayers’ money to survive, is particularly sensitive to any changes in the payments system.

Richard Pedley who breeds sheep on 1,200 acres of rented land in south east Cumbria, is worried that when the subsidy system changes his farm might no longer be viable.

Mr Pedley, who sits on the National Farmers Union (NFU) Uplands Forum, a lobbying group for hill livestock farming, thinks neither the subsidy system nor his business should be radically altered.

“British grown produce is farmed to the highest standards in the world,” he said.

“The food is safe, it’s affordable, it’s traceable, and above all sustainably grown with a low-carbon footprint – what more could you want?”

But some environmentalists believe radical change in UK agriculture is needed.

Christian Dunn, a campaigner with Friends of the Earth and a zoology lecturer at Bangor University, thinks there is a shift in policy thinking.

“We’re looking at vast areas of the British countryside given over to sheep farming that provides very little food, but is destructive because of overgrazing,” he said.

He believes provisions in the Agriculture Bill will eventually lead to some farmers effectively leaving the farming industry and becoming publicly-funded land managers instead.

“It’s a controversial and delicate issue, but if we’re going to pay farmers public money we need to see environmental benefit,” he said.

Despite disagreements on the balance between food production and the environment, both Sustain and Friends of the Earth are in full agreement with the NFU on what they claim is the need for legislation guaranteeing food and farming standards.

“We’re hoping the debate in the Lords will pull out some promises from the government and we might get some compromises,” said Ms Hird.

Mr Pedley is more forthright. He said: “If we are competing against imports with lower standards that are produced using production methods illegal in this country, that would be catastrophic.”

A ‘Menopause Champion’ at Work? Yes. You Also Get Paid Leave.

PM Johnson calls on Germany and France to compromise on Brexit