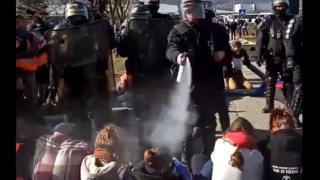 Video shows an officer spraying several people as they sit with their arms locked blocking a road at the site in the south-eastern region of Chambéry.

The demonstrators were calling for a reduction in flights at the airport.

No flights were disrupted, but the protest led to a build-up of traffic.

A queue of cars about 7km (4 miles) long formed at the entrance to the airport after dozens of protesters arrived at 11:00 local time (10:00 GMT) on Saturday.

Officers of the French gendarmerie were called in to remove the demonstrators, who were refusing requests to leave.

In footage posted on social media, one member of the security forces uses a canister to continuously spray protesters in an attempt to force them to move.

“Currently, [activists] blocking Chambéry airport are being gassed by the police,” Extinction Rebellion said in a tweet containing the footage.

The campaign group said its members were participating in a “peaceful protest” along with members of the anti-globalisation movement Attac and environmental charity Friends of the Earth.

While cars were prevented from entering the site, demonstrators were allowing pedestrians to pass, news outlet France Bleu reported.

Hours later the activists voted to end their protest and leave the site. They provided the police with their details and no arrests were reported.

Extinction Rebellion, which was launched in 2018, wants governments to declare a “climate and ecological emergency” and take immediate action to address climate change.

Along with a reduction of flights from Chambéry airport, those participating in Saturday’s protest were calling for an increase in fuel taxes and the eventual closure of the airport. 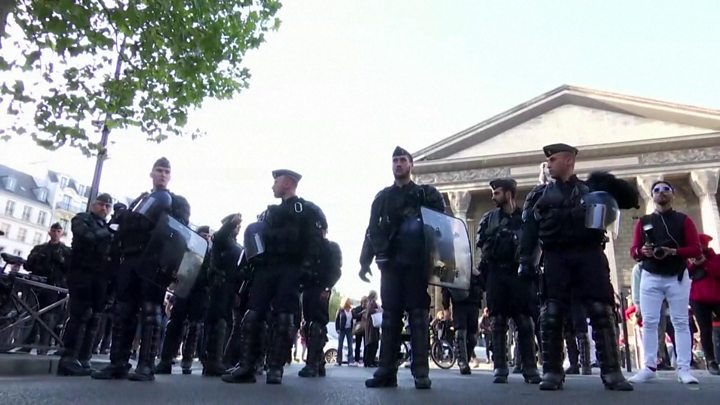 British zoos could close forever with animals put down – ‘It is extremely serious!’