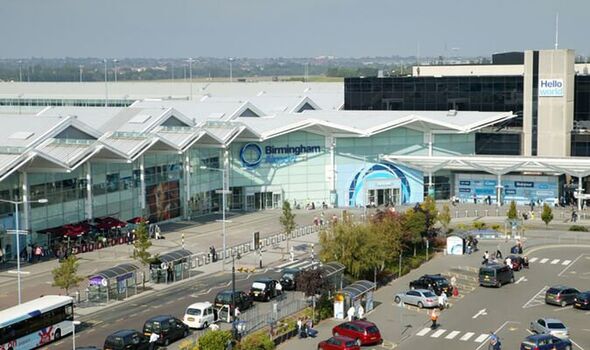 Morgan Jones, 24, watched the “strange” incident unfold at Birmingham Airport as he prepared for his journey to Amsterdam. He said the behaviour caused concern among staff and passengers on Friday July 29.

The tourist, from Coventry, had boarded his flight when the fellow passenger, thought to be in his 30s, leapt from his seat and dashed to the front of the plane in a “desperate” attempt to leave.

Some passengers noticed that he was “sweating” and “acting odd” before boarding the aircraft, Morgan claimed.

Airport bosses since confirmed the man was drunk.

Coventry Live says the man, who was clutching his phone the entire time, claimed to be on the “wrong flight”.

Morgan said: “We get on, all sit down ready to go, we are actually sort of a bit early for the take-off time, so I was thinking this has gone pretty smoothly, and they shut all the doors and everything. They took the bridge back from the plane so we are all ready to go.

“He waited until we were about to take off before he announced that he wanted to get off.

Nearly an hour later, the passengers remained at a standstill as the fiasco continued. Security consultants were called due to safety concerns which meant passengers could not fly until checks were carried out.

Morgan said that the pilot and cabin crew were “fed up” by this point. As the announcements were being made, he said you could “hear the frustration” in their voices.

Passengers were said to be “sympathetic” to staff on board the aircraft. When the plane finally took off, some passengers were told that they would miss their connecting flights, including a couple with two small children, who were travelling to Singapore.

Morgan said: “I felt really bad for them because they had young children and they could have had to wait for hours for the next available flight”.

Birmingham Airport has now confirmed exactly what happened and slammed the “stupidity” of the drunken passenger. A spokesman for BHX said: “A drunk passenger, flying with another airline, deliberately deceived ground handling staff to sneak onto this aircraft as part of an ill-advised prank. The passenger was identified and escorted off the aircraft.

“This episode inconvenienced others and resulted in the prankster and his two associates being offloaded from the flight they were booked to fly on. At no time was the safety and security of other passengers and aircrew compromised. We strongly condemn this kind of stupidity.”

‘That’s the priority!’ Queen ‘paces herself’ amid hopes she will attend personal event