Sunday’s elections are seen as a key test of democracy in Albania, which has been beset by months of political turmoil.

Albanians have begun casting ballots in local elections that have taken on more importance than usual amid high tensions between the ruling and opposition parties.

Socialist Prime Minister Edi Rama had been campaigning energetically ahead of the polls on Sunday, despite a boycott by the main opposition party, effectively paving the way for his party’s victory.

The opposition bloc, led by the conservative Democratic Party, has been demonstrating – often violently – for months, demanding Rama’s resignation and calling for new general elections.

Rama is accused of electoral fraud in a 2017 vote and of corruption, charges he denies.

President Ilir Meta tried to stop Sunday’s vote with a decree earlier this month, saying that the heated atmosphere would prevent a truly democratic vote, but the country’s highest election authority, the Electoral College, overruled him last Monday.

Meta then said he wanted to reschedule the elections for October, but Rama immediately dismissed it, insisting the vote take place on Sunday and began moves to impeach his former ally Meta.

Under intense domestic and international pressure to ensure a peaceful vote, Democratic Party leader Lulzim Basha on Saturday urged his supporters to refrain from violence.

Voting began at 0500 GMT and is scheduled to end at 1700 GMT with preliminary results expected on Monday.

Some 12,000 police were deployed ahead of the polls, in which voters will choose authorities to run the country’s 61 districts for the next four years. In 35 of those districts, the ruling Socialist Party candidates are running unopposed.

The opposition says the lack of competition means it is not a true election at all.

The Organization for Security and Cooperation in Europe has sent a team of 281 election observers to monitor the vote.

In the run-up to Sunday, some opposition mayors refused to allow ballot boxes to be installed in public buildings, resulting in scuffles in at least 14 towns. On Friday, at least two opposition mayors were reported arrested for resisting election preparations.

Despite the months of demonstrations, which have seen ballot boxes set on fire and petrol bombs hurled at Rama’s offices, protests have petered out in recent days following a reported warning from the US State Department that the Democrats would be classified as a “violent organisation” should protests continue.

Sunday’s vote is seen as a key test of democracy in Albania before a decision on the country’s bid for the membership of the European Union, expected in October.

Previously governed by a harsh communist regime, Albania joined NATO in 2009 and is in line to begin EU membership talks, but this remains elusive due to lagging reforms and rule of law issues. 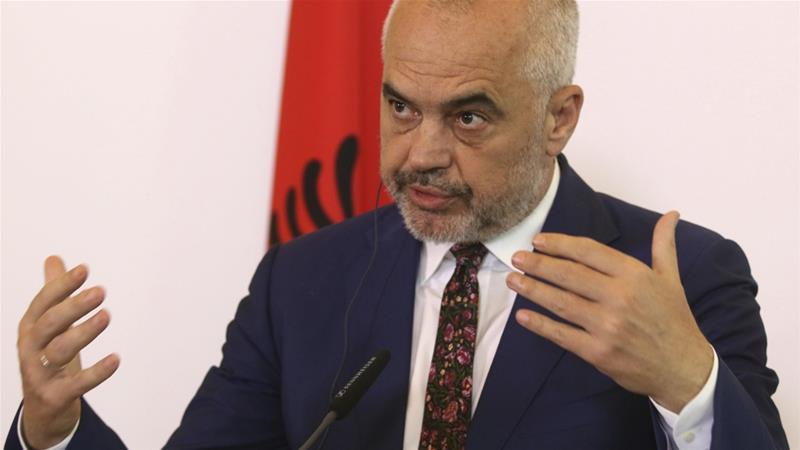 PM Edi Rama on elections: ‘Albania is not ready to join the EU’