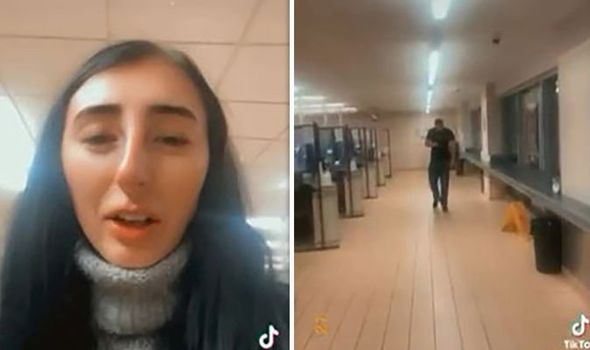 Sarah Sinclair, 27, and her boyfriend’s brother Luke Miller, 25, had dashed to the supermarket for bread and milk just before closing time. As they were browsing the aisles in Redcar, North Yorkshire, staff seemed to be finishing their shifts and, by the time the pair got to the checkout, the shop was empty.

Sarah and Luke realised they’d accidentally been shut inside and had to call 101 to escape, eventually making it out through a fire exit.

The pair were trapped for around 30 minutes, reports Lincolnshire Live.

Sarah, a call handler for the NHS, said today: “When we first arrived there were people in there and staff at the checkouts.

“We were just wandering around shopping and didn’t pay attention until we went to pay and I started to think ‘where’s the staff’?

“Then we noticed a beeping but, at the time, I just wanted my bread and milk so I hadn’t thought anything of it – I had barely even noticed the sound.”

She continued: “We started looking around – I turned to Luke and he said ‘oh no’.

“We couldn’t believe it and I was laughing so hard I thought I’d pee until I started thinking ‘but what do we actually do?’.”

Sarah said the manager called Luke into the store a few days later and gave him a bunch of flowers and a crate of lager as an apology.

She said: “At the time we had no idea what would happen but looking back we just find it funny.

“I have no idea how it happened and how nobody saw us in there because we weren’t hiding – but we got out in the end.”

They got trapped during a shopping trip on December 27.