Home » Europe » Aleksander Doba, Who Kayaked Across the Atlantic, Dies at 74

Aleksander Doba, a Polish adventurer who kayaked alone across the Atlantic at the age of 70 while subsisting on his wife’s fortifying plum jam — after having twice paddled solo across the Atlantic when he was in his 60s — died on Feb. 22 on the summit of Mount Kilimanjaro in Tanzania, Africa. He was 74.

His son Czeslaw Doba said the cause was asphyxia resulting from high-altitude pulmonary edema.

Mr. Doba’s three daring voyages earned him Guinness World Records titles, and in 2017 he became the oldest person to kayak across the Atlantic. His feats made him a national hero in Poland.

A former chemical plant engineer who lived in a little river town, Mr. Doba had long been the most accomplished kayaker in his country. His desire to conquer the ocean grew from an innocent idea that gradually consumed him: He’d kayaked everything else, so why not the Atlantic?

As a young man in Communist Poland, Mr. Doba had joined a local kayaking club, and he avidly took to the sport. In 1989, he surpassed the record for the most days paddled by a Polish man in a single year. He later spent 100 days paddling the circumference of the Baltic Sea. He also kayaked the coast of Norway to the Arctic Circle; on that trip, he was thrown from his boat during a storm and woke up to the sound of his own screaming after washing ashore.

But Mr. Doba hungered to cross an ocean so vast it seemed infinite, and he began plotting to kayak the Atlantic.

In the spring of 2017, Mr. Doba began his third trans-Atlantic crossing — and the one that garnered by far the most media attention — when he paddled out from New Jersey. After he cleared Barnegat Bay, he gradually became an insignificant floating blip in the ocean. 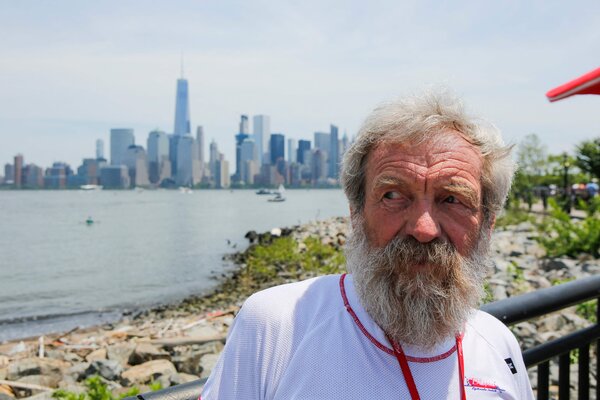 For 110 days, Mr. Doba paddled eastward on his specially designed fiberglass kayak, Olo. Along with jars of his wife’s plum jam, he subsisted on freeze-dried goulash and porridge, chocolate bars and homemade wine. After his salt-water-drenched clothes became too irritating, he navigated the rest of his trip buck naked. He slept in a tiny coffin-shaped cabin that he entered by sliding through a portal, and when flying fish landed onto his deck he snacked on them alive. (“Very fine,” Mr. Doba said. “Better than sushi.”)

During the voyage, Mr. Doba endured a violent two-day storm that nearly swallowed him whole. As he braced for his life, the rope tethering his sea anchor (the only thing keeping his kayak stable) broke off. Realizing that Olo might momentarily shatter into pieces, he strapped on a harness and scrambled across the deck to tie on a new anchor before crawling back to his nook.

After another storm, Olo’s rudder was seriously damaged, so he reluctantly contacted his team via satellite phone for help. A freighter picked him up, and its Filipino crew repaired the rudder. The ship’s captain was hesitant to let the disheveled man back into the ocean alone. But Mr. Doba insisted, and he became a blip in the ocean all over again.

His odyssey concluded when he paddled into the port in Le Conquet, France, that September.

“I came very close to the line of my possibility and human possibility,” he told The Times.

But Mr. Doba had also tested the limits of possibility during his two previous Atlantic crossings.

In 2010, when he kayaked from Senegal to Brazil, his skin broke out in salt-induced rashes, his fingernails nearly peeled off and his eyes suffered from conjunctivitis. In 2013, when he paddled from Portugal to Florida, a Greek tanker made the mistake of trying to rescue him.

“Me, fine,” Mr. Doba shouted in English to the ship’s crew, giving a thumbs-up.

They offered to throw him ropes. He refused.

When the ship circled back to him again, Mr. Doba shouted a vulgarity in Polish, and they left for good.

During his voyages, Mr. Doba admired the majesty of the sea and relished wonders that he alone was privy to. When he saw shooting stars at night, he made wishes that he said later came true. He playfully tapped the shells of turtles that swam alongside him. He witnessed the formation of storm clouds and the deafening calm that accompanied them.

He once became convinced that someone was watching him. He studied the water closely.

“Then I saw it: a huge head, sticking out of the ocean,” he told Canoe & Kayak magazine in 2014. “The whale swam here, and there, all around my kayak. Its 20-meter-long tail was wagging. And then, suddenly, the whale went down and disappeared into the ocean.”

Aleksander Ludwik Doba was born on Sept. 9, 1946, in Swarzedz, Poland. His father, Wincenty, was a mechanic. His mother, Eugenia (Ilijna) Doba, was a homemaker.

He grew up ice skating on ponds and skiing through forests. His father built him a bicycle from scrap parts, and when he was 15 he rode it across the country.

In the early 1970s, Mr. Doba graduated from Poznan University of Technology, where he studied mechanical engineering. He married Gabriela Stucka in 1975, and they settled in a town called Police, where he got a job at a chemical plant. In 1980, his co-workers asked him if he wanted to join their kayaking club, and soon he was spending all his weekends out on the water.

An early escapade involved kayaking on the Baltic Sea at a time when the Communist Party, to discourage defectors, had declared it illegal. When Mr. Doba encountered border patrol soldiers, they told him he was in serious breach of the law.

“I was just paddling down the river,” he explained. “I don’t know how I ended up here.”

Mr. Doba kept chasing adventure. He explored countless Polish rivers, and he amassed records and firsts. In 2010 he started seriously planning to cross the Atlantic, and he designed an unsinkable kayak that contained food lockers and a cabin to sleep in. That October, he paddled from Senegal to Brazil in 99 days.

“He wasn’t a man who necessarily looked forward to spending Christmas with the family,” his son Czeslaw said. “On the way to my grandmother’s house for the holidays, he wanted to be dropped off on a river and asked us to pick him up on the way back.

“A normal person wants to sit by the fire with their family for Christmas. He preferred to be dropped off on a cold river in the middle of the snow.”

In addition to his son Czeslaw, Mr. Doba is survived by his wife; another son, Bartek; a sister, Wanda Kedzia; and three grandchildren.

In recent years, Mr. Doba enjoyed celebrity status in Poland. People stopped him on the street to take selfies. An elementary school honored him with a statue in his scruffy, bearded likeness. And he began preparing to climb Mount Kilimanjaro, an expedition that had long been on his bucket list. He trained by jogging up and down the stairs of a high-rise building with a heavy backpack, and he took long daily hikes.

Mr. Doba arrived in Tanzania last month. On the morning of Feb. 22, he reached Kilimanjaro’s summit with two guides. After taking in the view, he sat on a rock to rest.

“He said many times that he didn’t want to die in his bed,” his son said. “From what we gather, he was euphoric to reach the summit. Then he sat down and fell asleep.”

One of the last people to see Mr. Doba alive was a Polish climber named Boguslaw Wawrzyniak, who was also summiting Kilimanjaro that day. When he encountered Mr. Doba at 18,700 feet, he was excited to encounter one of his homeland’s heroes, and he took a selfie with him on the mountain.

“I wished him luck in reaching the summit,” Mr. Wawrzyniak said in a phone interview. “Then I asked the local guides with him, ‘Do you know who this man is?’ And they said: ‘Yes. We know who this is. He is the king of the ocean.’”

Covid cases drop by a third in two weeks, but deaths will be slow to follow