BERLIN — With three weeks until German conservatives vote on a new party leader, a race that has long been a back-room affair has been making headlines across Germany and beyond.

As the Christian Democratic Union seeks to replace Angela Merkel, who is stepping down after 18 years, the party, and the country, is keenly aware that whoever succeeds her as party leader could well become the next chancellor of Germany.

The three leading contenders started their campaigns in the northern Germany city of Lübeck on Thursday, the first of eight regional party conferences before delegates vote at a party congress on Dec. 7.

“At the moment, it is just about the party leader,”” said Ursula Münch, director of the Academy for Political Education in Tutzing, “but that person will potentially be the chancellor candidate, so it is actually about much more.”

Ms. Merkel has risen to become Europe’s most powerful leader over her 13 years as chancellor. She surprised Germany when she announced last month that she would step down as party chief in December and would not seek re-election as chancellor in 2021, when her term ends.

Among the leading contenders are a traditionalist struggling to distance herself from the chancellor, a former rival of Ms. Merkel’s seeking to burnish his political credentials after a nine-year hiatus in finance and a 38-year-old upstart who argues that the party needs to appeal to a new generation.

The Christian Democrats bled support to the left and the far right in two state elections last month, and recent polls have shown them with the support of 26 percent of voters, down from nearly 33 percent in last year’s general election. Winning back disaffected voters and coming to terms with Ms. Merkel’s decision to allow more than one million migrants into the country in 2015 are among the major issues the party’s next leader will have to face. 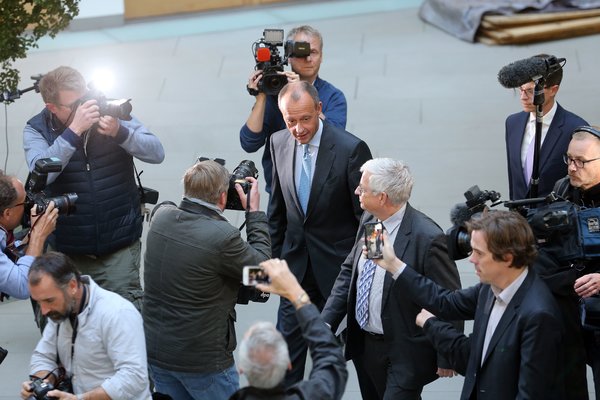 Political analysts say the race will ultimately come down to two candidates, Annegret Kramp-Karrenbauer and Friedrich Merz. They earned the strongest applause at Thursday’s meeting in Lübeck.

Ms. Kramp-Karrenbauer, 56, has followed a traditional path among Christian Democrats, rising through the party ranks to win three state election campaigns on the way to a seven-year run as governor of Saarland. This year, she left regional politics for a stint as party general secretary in Berlin, a move Ms. Merkel had encouraged.

But Ms. Kramp-Karrenbauer’s association with the chancellor may prove to be her biggest liability. She has been seeking to distance herself from Ms. Merkel recently, and on Thursday she called for increased domestic security and for a “rejuvenation” of conservative values.

She also emphasized her history of winning difficult races in Saarland, Germany’s smallest state, on the border with France. “At the end of the day, what matters is whether you can win elections and in all honesty, I have made it through a lot of elections, against a lot of opposition,” she told the public broadcaster ZDF last week. “You can be rhetorically very gifted, but at the end of the day, you need something to show for it.”

That remark was clearly a jab aimed at Mr. Merz, 62, a charismatic speaker who is remembered for his approachability during a brief term as conservative floor leader that ended when Ms. Merkel ousted him in 2002.

On Thursday, he laid out a five-point plan to attract more voters to the party, including winning back the roughly one million voters lost to the far-right party Alternative for Germany, or AfD, in the 2017 general election.

“Those are not nationalists or anti-Semites, those are voters who are disappointed with the conservatives,” Mr. Merz said in an interview with the newspaper Bild that was published online on Wednesday. “In the short term, we won’t get rid of the AfD, but we can halve it.”

Yet in the same interview, he refused to answer a question about the size of the personal fortune he had amassed since leaving politics nine years ago, going on to lead the Germany office of BlackRock, considered the world’s largest private fund manager, and to become senior counsel at an international law firm.

Pressed on whether he was a millionaire — many Germans are skeptical of extreme wealth, believing that social equality helps to ensure public peace — he said only that his net worth was “not below that.”

The third candidate, Jens Spahn, the current minister of public health, is calling for more open debate in the party, and to attract more younger voters, who are increasingly heading to the Greens.

“I am offering a generational change,” Mr. Spahn told party delegates gathered in the state of North Rhine-Westphalia on Nov. 7. Though he comes from the more conservative wing of the Christian Democratic Union, as an openly gay man who married his partner months after Germany changed the law to allow same-sex marriage, he brings a socially progressive face to the party.

Although the candidates appeared largely to agree with one another during the debate on Thursday, that it even took place is part of an unusually democratic process for the Christian Democratic Union.

The party was born out of the chaos in the immediate aftermath of World War II, intent on binding together people from disparate social backgrounds under an umbrella of shared Christian values. For decades, party leaders — there have been only seven since 1950 — were largely decided behind closed doors, rendering congress votes little more than a formality.

“There is no official crown prince or princess — the race is truly open,” said Stefan Marschall, a professor of politics at the Heinrich-Heine-University of Düsseldorf. “It’s as if a window had been thrown open and stirred up discussions and debates, including about the direction of the party, that were previously not taking place.”

Whoever emerges as the winner after Dec. 7 may determine whether the country faces a snap election. While Ms. Merkel has shown in the past year that she can work with Ms. Kramp-Karrenbauer, it would be hard to see her upholding her promise to serve out her term until the end of 2021 if Mr. Merz becomes the next party leader.

And the center-left Social Democrats, who make up the other part of Ms. Merkel’s government, have indicated that they view Mr. Merz as unacceptably right-leaning, making their departure from the governing coalition more likely.

Theresa May Announces Her Resignation, Leaving Brexit in Limbo