PARIS — A powerful government minister recently condemned it as an organization whose activities are racist and could lead to “fascism.” Lawmakers accused it of promoting “separatism” and of aligning with “Islamo-leftism” before demanding its dissolution.

France’s 114-year-old university student union, Unef, has a long history of drawing the ire of the political establishment — most notably over the years when it lobbied for the independence of the country’s most important colony, Algeria, or took to the streets against employment contracts for youths.

But the recent harsh attacks zeroed in on something that resonates just as deeply in a France struggling to adapt to social change: its practice of limiting some meetings to racial minorities to discuss discrimination.

In recent days, the controversy over Unef — its French acronym standing for the National Union of Students of France — spilled into a third week, melding with larger explosive debates roiling the country.

On Thursday, the Senate endorsed banning the group and others that organize restricted meetings, attaching a “Unef amendment” to President Emmanuel Macron’s law against Islamism, a political ideology the government blames for inspiring recent terrorist attacks. The National Assembly, controlled by Mr. Macron’s party, still needs to ratify the bill, expected to be one of the defining pieces of legislation of his presidency. 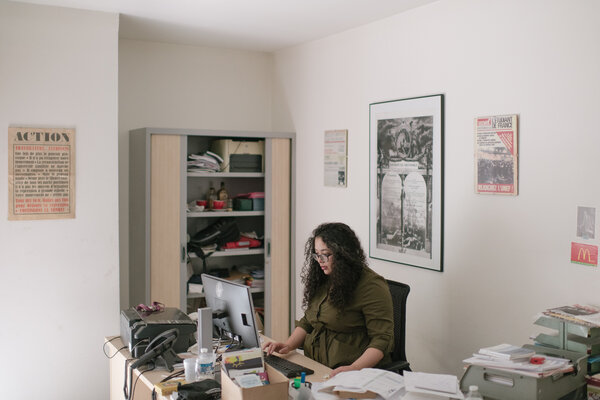 At the same time, the campaign before coming regional elections was turned upside down when Audrey Pulvar, a Black deputy mayor of Paris and a high-profile candidate, drew widespread condemnation after defending the restricted meetings.

The student union’s leaders defend the use of “safe space” forums, saying they have led to powerful and frank conversation; critics say the exclusion amounts to racism against white people and is an American-inspired betrayal of France’s universalist tradition.

To its critics, Unef is the incarnation of the threat coming from U.S. universities — importing ideas that are fundamentally challenging relations between women and men, questioning the role of race and racism in France, and upsetting society’s hierarchies of power.

There is no doubt that in recent years the union has undergone the kind of profound and rapid transformation seldom seen in a country where institutions tend to be deeply conservative and some, like the French Academy or literary prize juries, are structured in ways that stifle change.

The union’s transformation has reflected widespread changes among French youths who have much more relaxed attitudes toward gender, race, sexual orientation and, as recent polls have shown, religion and France’s strict secularism, known as laïcité.

Unef’s change — some hope and others fear — may portend larger social change.

“We scare people because we represent the future,’’ said Mélanie Luce, 24, Unef’s president and the daughter of a Black woman from Guadeloupe and a Jewish man from southern France.

In an organization dominated by white men until just a few years ago, Unef’s current leadership shows a diversity rarely seen in France. Ms. Luce is only its fifth female president and the first who is not white. Its four other top leaders include two white men, a woman whose parents converted to Islam, and a Muslim man whose parents immigrated from Tunisia.

“Unef is a microcosm that reveals the debates in the society,” said Lilâ Le Bas, a former president. That debate in France is just starting to address issues like discrimination in earnest, she said, “and that’s why it crystallizes so many tensions and pressures.’’

Like other student unions, Unef operates on government subsidies, about $540,000 a year in its case. Among its tasks, it addresses student living conditions, recently organizing, for example, food banks for students hit hard by the coronavirus epidemic.

But its increasingly outspoken social positions have drawn criticism from the political establishment, the conservative news media and even some past members.

In interviews with more than a dozen current and former Unef leaders, including all seven presidents in the past 20 years, not even they were uniformly comfortable with Unef’s recent stances, which have placed combating discrimination at the heart of its mission.

Its new focus, critics say, has led to a decline in the union’s influence and membership — it was once the largest but is now the second-largest in France. Supporters say that, unlike many other struggling left-leaning organizations in France, the union has a clear new vision.

In 2019, in a protest against blackface, Unef leaders helped stop the staging of a play by Aeschylus at the Sorbonne to denounce the wearing of masks and dark makeup by white actors, leading to accusations of infringing on freedom of expression.

More recently, local officials in Grenoble posted on social media anonymous campus posters that included the names of two professors accused of Islamophobia; Ms. Luce later called it a mistake, but many politicians brandished it as evidence of Unef’s “Islamo-leftism” or sympathies with Islamism.

The attacks rose to a new level last month after Ms. Luce was challenged in a radio interview about Unef’s practice of holding meetings limited to racial minorities.

A decade ago, Unef’s leaders started women-only meetings where members for the first time talked about sexism and sexual harassment in the organization. The discussions have since extended to racism and other forms of discrimination internally.

Ms. Luce explained to her radio host that no decisions were made at the restricted meetings, which were used instead to allow women and racial minorities to share common experiences of discrimination. But the interview led to a flood of sexist and racist death threats.

In a subsequent radio interview of his own, the national education minister, Jean-Michel Blanquer, agreed with the host’s characterization of the restricted meetings as racist.

“People who claim to be progressive and who, in claiming to be progressive, distinguish people by the color of their skin are leading us to things that resemble fascism,” Mr. Blanquer said.

Mr. Blanquer has led the government’s broader pushback against what he and conservative intellectuals describe as the threat from progressive American ideas on race, gender and postcolonialism.

France’s culture wars have heated up as Mr. Macron shifts to the right to fend off a looming challenge from the far right before elections next year. His government recently announced that it would investigate universities for “Islamo-leftist” tendencies that “corrupt society.”

Now even relatively obscure social theory terms like “intersectionality” — an analysis of multiple and reinforcing forms of discriminations — are drawing fierce attacks by politicians.

“There is a battle to wage against an intellectual matrix that comes from American universities and from intersectional theories set on essentializing communities and identities,” Mr. Blanquer said in an interview with a French newspaper.

Aurore Bergé, a lawmaker from Mr. Macron’s party, said that Unef’s actions lead to identity politics that, instead of uniting people in a common cause, excludes all but “those who suffer from discrimination.”

“We’re driving out the others as if they don’t have the right of expression,” said Ms. Bergé, who recently unsuccessfully submitted an amendment that would have barred Muslim minors from wearing the veil in public.

Unef’s current top leaders say that in focusing on discrimination, they are fighting for France’s ideals of liberty, equality and human rights.

They view the recent attacks as rear-guard moves by an establishment that refuses to squarely face deep-rooted discrimination in France, cannot come to terms with the growing diversity of its society, and brandishes universalism to silence new ideas and voices, out of fear.

“It’s a problem that, in our society, in the country of the Enlightenment, we restrict ourselves from speaking about certain subjects,” said Majdi Chaarana, Unef’s treasurer and the son of Tunisian immigrants.

As the student union has spoken out more boldly, Unef’s influence, like that of other left-leaning organizations — including the Socialist Party, with which it was long allied, and labor unions — has diminished, said Julie Le Mazier, an expert on student unions at the European Center of Sociology and Political Science.

“It’s a major crisis, but it’s not at all specific to Unef,” she said.

Bruno Julliard headed the union when it forced a sitting president, Jacques Chirac, to drop a contested youth employment contract in 2006. Back then, the union was more concerned with issues like tuition and access to jobs, said Mr. Julliard, the first openly gay president of the union.

Mr. Julliard said that the union’s restricted meetings and its opposition to the Aeschylus play left him uncomfortable, but that young people were now “much more sensitive, in the good sense of the word,” to all forms of discrimination.

“We have to let each generation lead its battles and respect the way it does it, though it doesn’t prevent me from having an opinion,” he said.

William Martinet, a former president, said that the focus on gender eventually led to an examination of racism. While Unef’s top leaders tended to be economically comfortable white men from France’s “grandes écoles,” or prestigious universities, many of its grass-roots activists were of working-class, immigrant and nonwhite backgrounds.

“Once you put on glasses that allow you to see discrimination, in fact, there’s a multitude that appears before you,” Mr. Martinet said.

But the reception was far different on the outside.

Last fall, when a hijab-wearing Ms. Pougetoux appeared in the National Assembly to testify on the Covid epidemic’s impact on students, four lawmakers, including one from Mr. Macron’s party, walked out in protest.

The wearing of the Muslim veil has fueled divisions in France for more than a generation. But for Unef, the issue was now settled.

Its leaders had long considered the veil a symbol of female oppression. Now they saw it simply as a choice left to women.

“To really defend the condition of women,” said Adrien Liénard, the other vice president, “is, in fact, giving them the right to do what they want.”