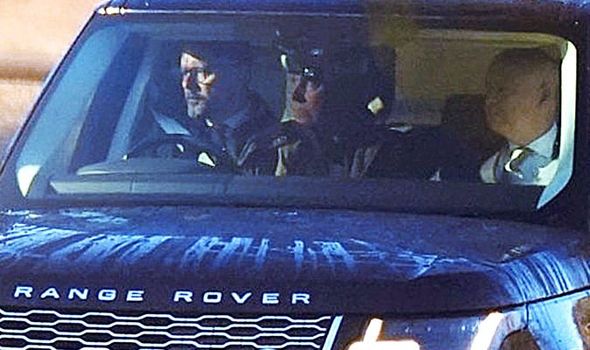 The Duke of York, 61, was seen leaving Royal Lodge, his home on the Queen’s estate in Windsor, in a black Range Rover on Thursday morning. Images show Prince Andrew sitting in the back seat of the vehicle while being driven from his home.

This marks the first time Andrew has been seen in public after a judge ruled his civil sex assault case could proceed after his lawyers attempted to get it dismissed.

They argued Ms Giuffre had waived her right to pursue a claim against the royal.

However, Judge Lewis A Kaplan said the case could continue, adding that this ruling did not determine the “truth or falsity” of Ms Giuffre’s complaint.

Ms Giuffre, 38, is seeking unspecified damages from the royal, alleging he sexually abused her on three separate occasions in 2001 when she was a minor under US law.

The Duke of York has repeatedly denied her claims.

In an interview with BBC Newsnight in 2019, Andrew said he had “no recollection” of ever meeting Virginia Giuffre, despite there being a photo of the pair together alongside Ghislaine Maxwell.

Ms Giuffre has brought the case against Andrew by using the New York’s Child Victims Act (CVA), which allows survivors of childhood sexual abuse to pursue a case that otherwise would have been barred because too much time had passed.

The ruling now means the case moves to the “discovery” phase.

As the case progresses towards trial, Andrew, Ms Giuffre and any other potential witnesses would have to give depositions.

David Boies, Ms Giuffre’s lawyer, told BBC’s Newsnight the recent ruling was “an important step” in moving towards a trial.

He said: “I think it’s very important to Virginia Giuffre that this matter be resolved in a way that vindicates her and vindicates the other victims.

“I don’t think she has a firm view as to exactly what a solution should be.

“But I think what’s going to be important is that this resolution vindicates her and vindicates the claim she has made.”

He also said that Ms Giuffre would be unlikely to accept a “purely financial settlement” to end her sexual assault civil lawsuit against the royal.

When asked about the US ruling, a spokesperson for Buckingham Palace said: “We would not comment on what is an ongoing legal matter.”