Andrew Marr lashed out at former Green Party leader Caroline Lucas, expressing his confusion over her decision to vote against “softer” Brexit options despite supporting a second referendum. The BBC presenter said he “does not really understand” her decision. Mr Marr quizzed: “Talking about close votes, Ken Clarke’s Amendment to the customs union came within three votes of being a success, and again you voted against it. I think a lot of people cannot understand why somebody offered half the cake or not a full Brexit from your position, is still voting against those ‘softer’ Brexit options.

“I do not really understand it.”

Ms Lucas began: “Well, because the bottom line is three years after the first referendum so many people’s minds have changed, the evidence is there to show that – “

“What I am saying is if you say ‘this or nothing’, then you are behaving like everybody else.” 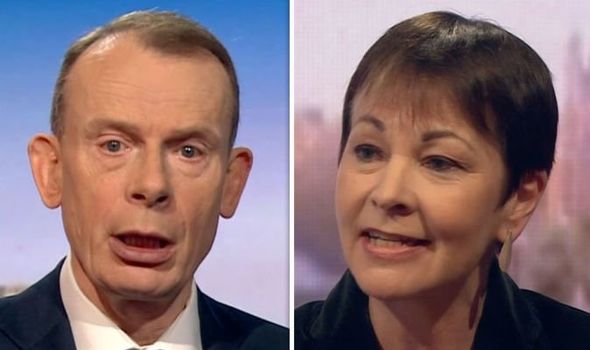 If you say ‘this or nothing’, then you are behaving like everybody else

Ms Lucas responded: “No I am saying anything, as long as it is linked to going back to the people, because three years have now elapsed, so much new information has become available.

“Nobody was talking about, for example, the risks to peace in Northern Ireland back then.”

The comments follow European Council President Donald Tusk proposing a 12-month “flextension” which would postpone Brexit up until March 29, 2020.

On Wednesday, EU leaders will gather for an emergency Brexit summit to discuss the Prime Minister’s request to extend Article 50 until June 30.

Theresa May, who is seeking to buy more time to come up with a “compromise” with Labour, needs the approval of each of the other 27 EU member states.

While German Chancellor Angela Merkel has said “we need to be patient and understanding of the predicament” the UK has found itself in, France is using a harsher tone.

The French foreign minister, Jean-Yves Le Drian, said the Brexit uncertainty must not continue and called on the British to make up their minds.

He told reporters: “It’s time for this situation to end.

“We can’t live perpetually with Brexit. We regret this vote, we didn’t ask for it, but at some point there is an exit.

“The British authorities, the parliament, can’t expect the EU to exhaust itself permanently over the ups and downs of Brexit.”

Two transgender women win seats in the next German Parliament.