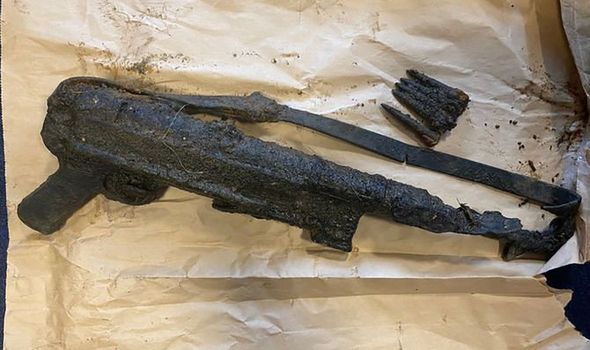 The angler casted off into the River Frome near Stroud, Gloucestershire, this week and reeled in what he thought was a whopper. However, he discovered in fact he’d hooked the war weapon.

It remains a mystery what the gun, found with a few bullets in it, was doing in the murky depths of the river.

But police told Gloucestershire Live it is “a piece of history”. The angler had contacted officers after the remarkable discovery.

A spokesperson for Gloucestershire Police’s Specialist Ops unit, who attended the riverbank, said: “We were called to help out a fisherman today who pulled something a bit different from the river: This German sub-machine gun is a piece of history, which could be as old as 1940.

“We wouldn’t advise eating this one. The weapon is going to be examined by our force armourer.”

A magnet fisherman came across a rare Mac 10 machine gun in River Lee in Enfield, north London, in August 2018.

But officers found the weapon to be too corroded to further any investigations.