The driver is filmed talking to a police liaison officer who was determined to cool tensions between the motorist and the climate activist group in St Ives, Cornwall. The man claimed he lived on the road which had been blocked off for the latest protest.

In the clip, he is heard saying “they’re f***king p***ing me off” as he beeps his car horn repeatedly.

Witnesses told Cornwall Live the motorist even threatened to drive through protesters.

Extinction Rebellion has embarked on a series of protests across Cornwall this weekend to highlight climate change issues to the world leaders at the G7 summit, which is taking place in St Ives.

Ocean Rebellion, which began as part of well-known Extinction Rebellion, protested on a beach there on Thursday. Objectors depicted the Prime Minister literally “in bed” with an oil oligarch ahead of the G7 summit. 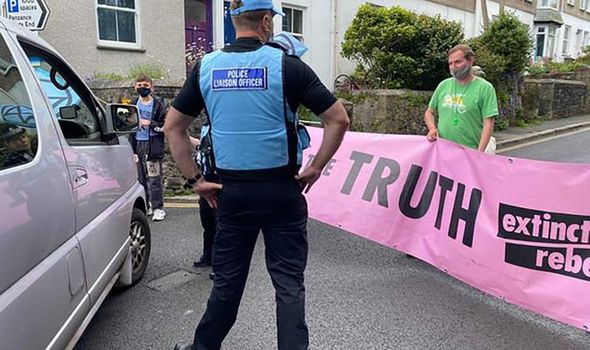 However, the battle against coronavirus will take centre stage at the meeting this year.

In a statement the British government said: “The UK is taking on the Presidency of the G7 at a critical time for the world, and as we prepare to host the COP26 UN Climate Conference in November.

“With new vaccines offering a way to end the pandemic, we will use our G7 Presidency to fight and build back better from coronavirus.”

But G7 leaders will also look at tackling climate change and preserving the planet’s biodiversity as well.

New Garda Divisional Policing Model Q&A: What are the changes, why are they being made and what do they hope to achieve?