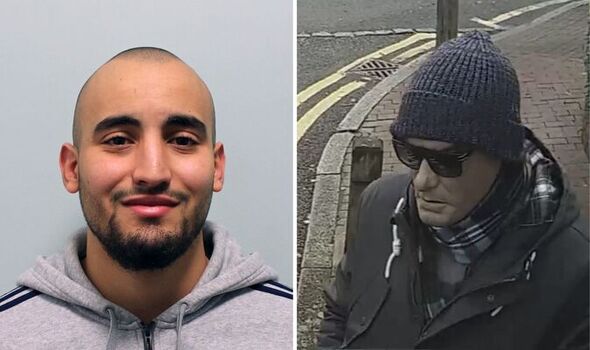 Flamur Beqiri was shot dead at the door of his £1.7million home in Battersea, south-west London, in front of his screaming wife as she shielded their two-year-old son on Christmas Eve in 2019.

Mr Beqiri, 36, brother of The Real Housewives Of Cheshire star Misse Beqiri, posed as a record label boss but was a kingpin in an international drugs gang.

Swedish pro kickboxer Anis Hemissi, 24, was hired to fly to London for the hit, which was planned over six months.

He wore a latex mask and posed as a litter picker before shooting Mr Beqiri eight times from behind.

Hemissi was jailed for life with a minimum term of 35 years at Southwark Crown Court yesterday.

He was convicted of murder and having a gun.

Accomplice Estevan Pino- Munizaga, 35, who rented a flat for Hemissi was jailed for 15 years after being acquitted of murder but found guilty of manslaughter.

Clifford Rollox, 31, from Islington, north London and Claude Isaac Castor, 31, from Sint Maarten in the Caribbean were each jailed for three years for perverting the course of justice, having been hired to clean up and remove evidence including the gun.

“He was also a son, a partner and a father.

“His children will never know him.This was international crime at its most brutal.”

Mr Beqiri had married Debora Krasniqi by Italy’s Lake Como after they met at the wedding of his sister Misse.