The Most Rev Justin Welby urged people to use the tragedy as a turning point where we choose a “better future for all”, rather than a society that only benefits the rich and powerful. Meanwhile, Pope Francis called for Covid vaccines to be better distributed around the world. In his Easter Sunday service, the Archbishop encouraged people to take inspiration from the “overwhelming generosity” of God.

Broadcast from Canterbury Cathedral on the BBC, he said: “In this country, in this world, we have a choice over the next few years.

“We can go on as before Covid, where the most powerful and the richest gain and so many fall behind. We have seen where that left us.

“Or we can go with the flooding life and purpose of the resurrection of Jesus, which changes all things, and choose a better future for all.

“The overwhelming generosity of God to us should inspire the same by us, in everything from private acts of love and charity to international aid generously maintained.

“We have received overwhelmingly, so let us give generously.”

The Archbishop’s message also touched heavily on the topic of death, with reference to all those who had died since the start of the pandemic. 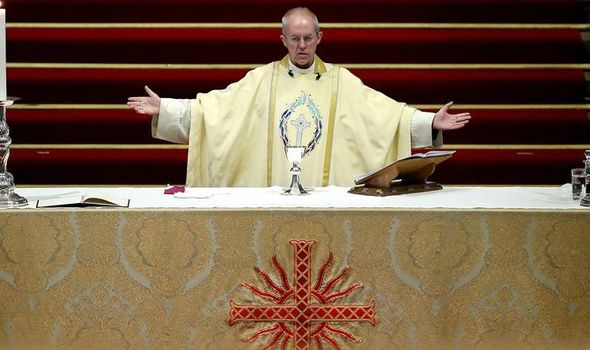 He described the past 12 months as “yet another cruel period of history taking from us those we loved, ending lives cruelly and tragically”.

Meanwhile, Pope Francis presided over a scaled-down Mass in St Peter’s Basilica at the Altar of the Chair.

This has been the second Easter running that all papal services are attended by 200 people instead of the usual 100,000. However, millions of Catholics watched on digital media.

The Pope said he hoped the dark times of the pandemic would end and that people could rediscover “the grace of everyday life”.

He urged countries to quicken distribution of Covid-19 vaccines – particularly to the world’s poor – and berated armed conflict and military spending during the crisis.

He said: “The pandemic is still spreading, while the social and economic crisis remains severe, especially for the poor.

“Nonetheless, and this is scandalous, armed conflicts have not ended and military arsenals are being strengthened.”