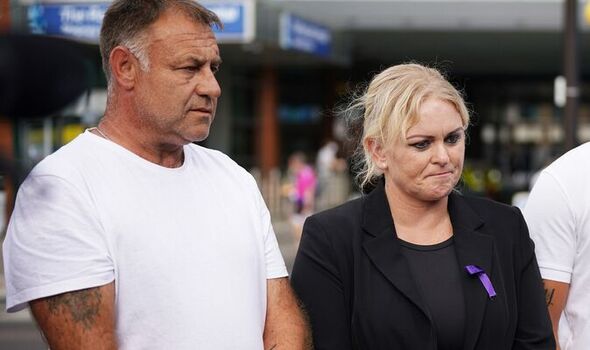 Archie, 12, is now due to have his treatment switched off today, any time from 12pm – a decision his mother called an “execution”. Doctors at the Royal London Hospital were due to turn off his ventilator at 2pm yesterday, but a UN committee asked the Government to intervene until it considered his case.

But after an emergency online hearing yesterday, Archie’s parents Hollie Dance and Paul Battersbee were told their last-ditch attempt to prolong their son’s life had failed.

Speaking outside the Royal London Hospital, Hollie said: “We made a promise to Archie, we will fight to the end. AndArchie’s still fighting.

“If tomorrow’s the last day then so be it, but we will be applying to the Supreme Court.

Hospital. And she revealed they feel “let down” by the system. She added: “We’re UK citizens but he wn” re t we’re not looked after, we’re not protected, it’s a pretty sad state of affairs.

“In this country there’s no options: it’s either Archie’s conscious or he dies, that’s it.

Hollie went on: “We continue to be shocked and traumatised by the brutality of the UK courts and the hospital trust. Our wishes as parents continue to be trampled on and ignored. We do not understand the urgency and rush to end life-support.

“The hospital trust has at no point given us time to come to terms with what has happened. This is no way for a compassionate society to treat a family in our situation. We will continue to fight.”

The youngster has not regained consciousness after he was found at home in Southend, Essex, on April 7. He is thought to have been taking part in a social media challenge.

Doctors said Archie is brain-stem dead and that continued life-support treatment was not in his best interests.

At the Court of Appeal, Sir Andrew McFarlane, sitting with Lady Justice King and Lord Justice Moylan, said: “My decision is that, save for granting a short stay until noon tomorrow, the parents’ application for any further stay is dismissed.”

Fiona Paterson, for Barts Health NHS Trust, said the UN committee’s request was not binding. She added the matter can be determined by the court with no further participation of the Government necessary.

The Department of Health said: “We recognise this is an exceptionally difficult time for Archie’s family.”

‘Will not go to Edward!’ Earl of Wessex set to miss out on Duke title, says source