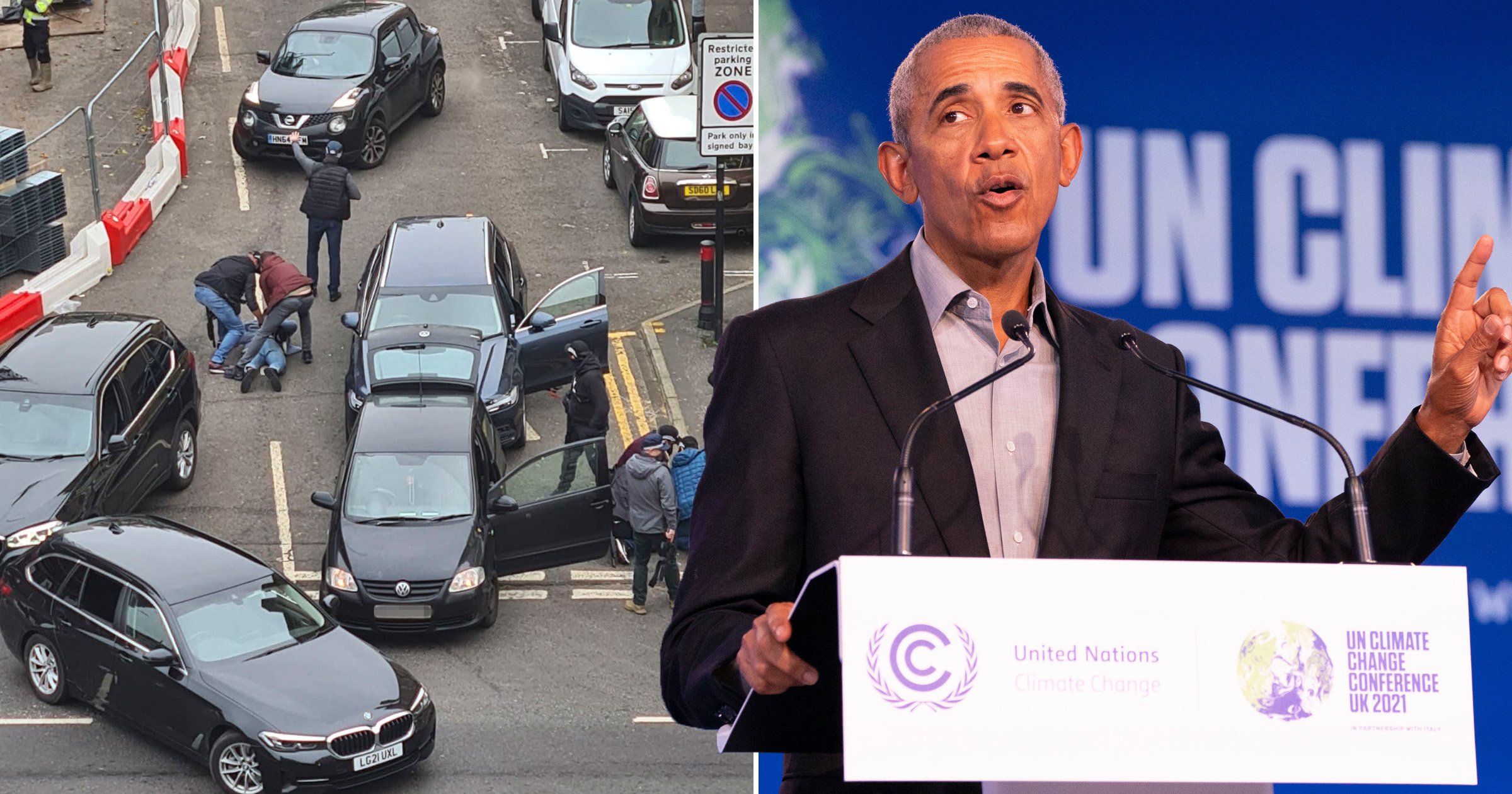 Undercover armed police officers arrested a man just a stone’s throw from the COP26 conference centre in Glasgow this morning.

The 43-year-old was detained on suspicion of firearms crimes by cops armed with assault rifles and who had their faces covered with masks.

Moments later and less than 500 yards away, ex-US president Barack Obama would begin a speech where he accused his successor Donald Trump of ‘active hostility towards climate science’.

The officers in unmarked police BMWs acted by blocking a black Volkswagen car in the Finnieston area of the city.

In a sting seen by multiple people, the burst out of their cars and dragged the man – who had been arrested over disrupting a COP event on Saturday – out of his car.

Witnesses said he attempted to make a run for it but he was forced to the ground and handcuffed.

It happened on Breadalbane Street at the junction with St Vincent Street at about 11.15am.

Onlookers said the officers ‘were all shouting, which must be a tactic to confuse’ suspects.

A construction worker told MailOnline: ‘The noise was deafening. They were shouting and that probably disoriented the two men they arrested.

‘The amount of undercover police and weapons suggests this couldn’t wait. We don’t know what is coming but fair play to the police. They did well.

‘They searched the vehicle, opened to boot and there was a large orange bag they were interested in. The car was left across the road before a truck came to impound it.’

Shop worker Eileen Gordon, 29, said: ‘It was rapid. There was no messing about. Cars came from everywhere.

‘Several cars surrounded the Volkswagen and it looked like one of the guys tried to make a run for it but they got a grip on him and pinned him to the ground.

‘The driver was pulled out of the car and he had assault rifles aimed at him.’

Police Scotland said the man was arrested after a raid on a property in Argyle Street with a search warrant.

A spokesperson said: ‘A 43-year-old man was arrested on Argyle Street, Glasgow, on November 6 and charged with an alleged breach of the peace in relation to a Cop26 event earlier this month.

‘He appeared at Glasgow Sheriff Court on Sunday and was released on bail.

‘The man was further arrested today on Breadalbane Street, Glasgow, in connection with alleged firearms offences following a search warrant being carried out at an address on Argyle Street and enquiries are ongoing.’

The police spokesperson added that, at this stage, the firearms offences are not linked to COP26 and there have been no terror-related charges.