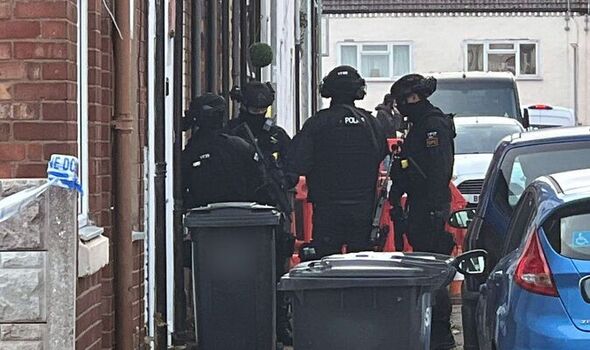 Several officers are at the location in Cross Street in Kettlebrook, and will likely stay in place as the ordeal enters its second day. Staffordshire Police were first called to the emergency at 10am on Tuesday. They have said that a man has refused to leave a property after “making threats”. The scene remains in place. Specially-trained negotiators are working in the area alongside the armed officers.

A spokesperson for Staffordshire Police said: “Officers remain at the scene of an ongoing incident at a property on Cross Street in Kettlebrook, Tamworth.

“We were called to the address at 10.30am yesterday (Tuesday 6 September) following reports of concerns for the welfare of a man. The man had refused to leave the property and a number of threats had been made.

“He has since engaged with specially-trained negotiators who remain at the scene. No one has been reported injured.

“A temporary road closure remains in place and we are working hard to bring the incident to a safe conclusion, for everyone, as soon as possible.

“We would like to thank local residents and businesses for their understanding and patience throughout this time.”

Nearby residents have been been told by police to remain in their homes as the emergency is ongoing.

A woman who lives opposite the scene told Birmingham Live: “I noticed police here at around 5pm yesterday.

“The man inside has been evicted and is refusing to come out. He’s threatening to use his crossbow, apparently.

“My neighbours have had to stay in their homes overnight and today.”