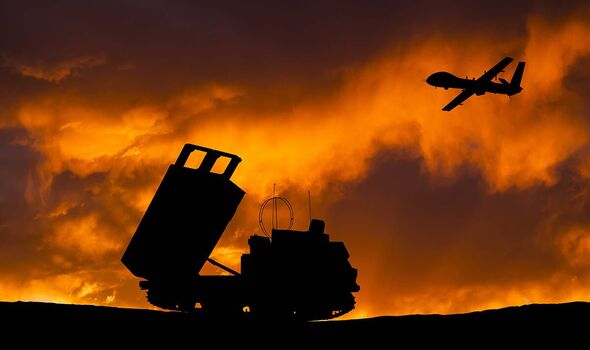 But officials have conceded that they only have funding for 61, many of which will be upgraded in the US over the coming years. The British Army currently has around 40 and wanted to buy dozens more artillery systems. And the Daily Express can reveal military chiefs still need to buy another 14.

A senior group of MPs today heard there are “supply chain issues” as a result of the war in Ukraine. Lt General Sharon Neysmith, Deputy Chief of the General Staff, conceded military chiefs are “very uncomfortable” about some of the gaps they have in their capabilities.

And this newspaper has also learnt “the vehicle is no longer in production”. This has led to defence officials holding urgent talks with other nations to establish how they can order more artillery systems.

Additional funding will only be allocated once they have found someone selling them, the Daily Express understands.

Britain has given six M270 Multi-Launch Rocket Systems plus ammunition to Ukraine, from around 40 systems.

A recent RUSI report has recognised the importance of Ukraine’s artillery to its ability to hold Russia’s initial invasion at bay.

The report says “no country in NATO, other than the US, has sufficient initial weapons stocks for warfighting or the industrial capacity to sustain large-scale operations.”

“The importance of artillery has been made crystal clear by the war in Ukraine. Yet the Defence Secretary looks set to leave our armed force woefully outgunned on the battlefield for years to come.

“Ministers must publish the updated Integrated Review and set out a contingency plan to cover funding shortfalls which are likely to arise.”

Military chiefs today told the Commons Defence Select Committee “deep fires” – long-range artillery – are among their top concerns about the number of units the British Army has.

Lt General Sharon Nesmith, the Deputy Chief of the General Staff of the British Army, said: “We are looking at what opportunities there are to accelerate.

“There are two very realistic constraints that may play out in our ability to do that.

“One of those is supply chain constraints as a consequence of the war in Ukraine. And the second one is the capacity of industry to do that.

“We do want to accelerate and we will do what we can.

“We are looking at what we can do to meet our gaps, or the risks we no longer feel comfortable with and to do things quicker.”

A Ministry of Defence spokesman said: “We have a fully-funded and affordable Equipment Plan outlining £242 billion of Defence spending over the next 10 years, which builds in resilience against emerging financial pressures.

“Our Boxer vehicle programme is on track with 523 vehicles initially ordered and a further 100 confirmed and contracted earlier last year.

“The requirement for an increase in numbers of Multiple Launch Rocket Systems (MLRS) was identified as part of the Integrated Review. The vehicle is no longer in production and funding will be applied for when we have identified a source of supply from MLRS partner nations.”