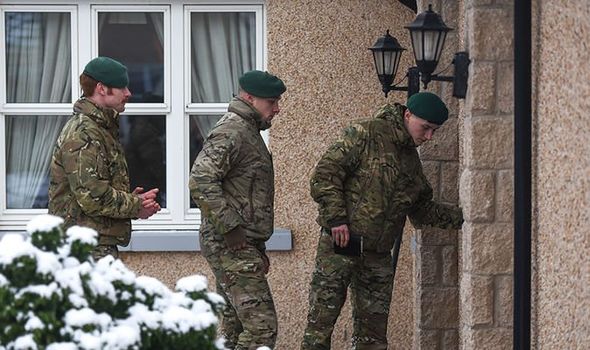 Regulator Ofgem has launched a probe into why energy firms are taking so long. It came as weather forecasters predicted an Arctic blast this weekend, which will send temperatures plummeting to -5C and blanket parts of the country in snow.

In northern England and Scotland, the Army has been sent in to check on vulnerable people, hand out emergency food bags and examine power lines for damage.

Around 130 troops are going door-to-door in north-east Scotland, where 1,600 Scottish and Southern Electricity Networks (SSEN) customers have no supply.

South of the border, Durham County Council said 100 servicemen and women had been working from Weardale to help local people.

Neighbouring Northumberland County Council has declared a major incident due to ongoing concerns for those without energy and water.

In Cumbria, about 6,000 Northern Powergrid and 1,700 Electricity NorthWest customers have no power.

Ofgem’s review will focus on the resilience of the system and the network companies’ response.

It has lifted the £700 cap on compensation, allowing those affected to claim £70 for each 12-hour period they are left without power, after an initial £70 for the first 48 hours.

Jonathan Brearley, Ofgem’s chief executive, said: “The effects of Storm Arwen are still being felt, with 10,500 homes still without power.

“We accept the network companies have been working in challenging conditions, but until every home in Britain has power restored, that relentless effort must continue.”

He added: “We have strict rules on how companies need to operate in these circumstances and will take action if needed.” Yesterday the Met Office said 3½ inches of snow would hit eastern parts of the country today.

“Don’t be surprised to run into sleet or wet snow on the commute across East Anglia/Southeast England.”

He also said there would be “some snow over the mountains in the North, maybe as far south as Wales.”

Meanwhile residents without power have told of their ordeal.

Dr Terry Murphy, from Bishop Auckland, County Durham, said of the energy firms: “If you’re constantly telling vulnerable people that power will be on in a few hours, they’re making bad decisions because you’re giving them the wrong information.”

Jessica Teasdale, 35, from Stanley, said: “People are frustrated and angry ‑ everyone is getting ill. I saw my elderly neighbour yesterday, the poor man looked like he was going to cry. He’s a vulnerable person but no one has checked on him.”

A spokesman said: “We welcome Ofgem’s review into Storm Arwen.”

UK election 2019: Final hours of voting ahead of the count, poll predicts victory for Boris