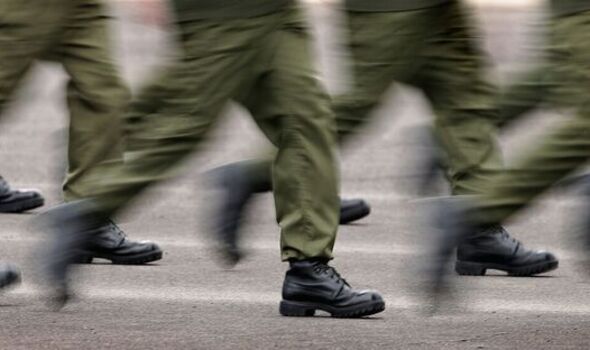 More than 3,000 soldiers are currently being trained to replace a range of key workers set to walk out over the next four weeks and cause havoc over the Christmas period.

But Army chiefs – who have seen the number of troops slashed by 1,600 this year, and are bracing for the loss of a further 8,000 total to reach a target reduction of 73,000 by 2025 – have warned they simply no longer have enough personnel to ensure key services remain unaffected while honouring operational commitments.

According to the GMB Union, some 10,000 ambulance workers across nine trusts in England and Wales are preparing to down tools on December 21.

More than 2,000 soldiers serving with the Royal Logistics Corps have been earmarked to drive ambulances as part of a wider Home Office contingency plan to maintain services throughout the next six weeks of planned strikes.

They were last night awaiting expected authorisation under the Military Assistance to the Civil Authority, or MACA, edict.

The MoD has already received more than around 80 MACA requests this year, including 600 soldiers committed to Operation Isotrope to counter migrant crossings.

In addition, civil servants at the Home Office have submitted a formal request for military assistance under MACA to replace Border Force staff who have voted to strike at airports and ports.

A further 900 troops, many of them military police personnel from across the RAF, Navy and Army, have already been placed on standby to fill this role.

While the head of the Army, General Sir Patrick Sanders, has pledged to supply the resources requested, it is up to former SAS commander Lieutenant General Roly Walker, now Deputy Chief of Defence Staff (Military Strategy & Operations), to ascertain how many troops are available at any one time.

“During Covid the military provided 25,000 personnel, and that was the main effort for the Army. We’re now back to contingency operations training and deployments, with soldiers deployed across the globe,” said one senior army source last night.

“Ambulance drivers will primarily be drawn from the RLC with those requested to replace border staff coming from military police units across the Army, Navy and RAF – but no one
has hundreds of staff sitting around doing nothing.”

This could see troops based on frontline Nato duties, such as the 652 currently in Estonia to reinforce Europe’s border with Russia, forced to extend their deployments as replacements are used to counter-strike action.

Under current planning soldiers tasked with replacing ambulance drivers, who have already been warned they may not be spending Christmas with their families and loved ones, will be deployed to so-called  “pressure points” across the country, based primarily in major cities and conurbations.

Commanders fear this will leave glaring gaps among the 20 per cent in England and Wales who live in rural communities.

Last night another senior serving officer – based at Army HQ in Andover, Hampshire –  told the Sunday Express: “It’s a question of numbers.”

“We are facing a major drawdown of personnel while, at the same time, maintaining more than 12 overseas commitments.”

“We simply do not have the numbers and it feels as if no-one is listening.”

He added: “We have been briefed that there are more than 10,000 ambulance drivers, so using 2,000 soldiers to replace them is clearly a token gesture at best.”

“And, with current thinking  that the troops we do deploy will be dispersed in areas of greatest population density, it is likely that more rural areas will experience a much more limited service.”

Concerns over shrinking numbers adds to a widespread and mounting feeling of frustration over increasingly being deployed as a ‘social emergency service’ for the government while Army wages fall well below the national average and living conditions deteriorate.

Last night Sharon Woodstock, whose soldier fiancée contributed to the Covid effort, said:”The mood is low. Not only did they not join up for this, but no one listens when they ask for a pay rise and they cannot strike.”

Poor wages has already sparked an exodus of staff across the military – despite commanders presuming that a pending recession will attract more to remain in uniform.

Lieutenant General Walker’s regiment, the SAS, is no exception, with an increasing number of soldiers  in the Who Dares Win regiment abandoning low Army wages to work in the private sector.

It follows the regiment’s first drop in four years over “satisfaction with pay” in the annual Armed Forces continuous survey.

A trained special forces trooper who has passed selection and completed his 12 month continuation training will earn £31,990, including additional specialist pay after parachute training.

A recent National Audit Office report warned that troop numbers across all branches would be cut by a further 6,350, while the number of new recruits is to be shrunk by 1,450, further limiting the up-flow of potential soldiers to the SAS and SBS.

In addition, with a recent pay rise worth £1.4 billion not yet funded, the likelihood of future hikes over the next decade were extremely limited.

Last night Shadow Defence Secretary John Healey said: “Our armed forces are there to defend our nation, but are having to bail out Conservative ministers who are grinding our country to a halt.”

“Troops will perform these tasks with total professionalism, but extra domestic demands raise real concerns while Ministers continue to cut the size of the British Army and the UK faces growing threats.”

“Ministers should do their jobs on behalf of the public and get employers and trade unions back around the negotiating table to resolve these disputes and prevent further strikes.””