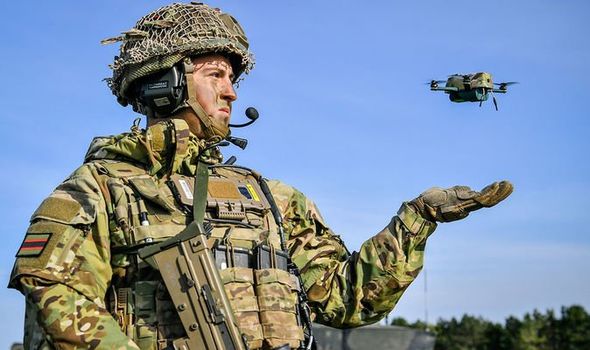 Defence Secretary Ben Wallace declared that Britain is in a “very real race” with its enemies for technological advantage on the battlefield. Among the other equipment being showcased by defence chiefs on Salisbury Plain yesterday was a tiny drone that could fit in the palm of a soldier’s hand. The Nano Bug can travel at speeds of up to 50mph, and allows soldiers to have a bird’s eye view of the battlefield from the frontline. The X3 unmanned autonomous vehicle can also send live footage back to troops and lasers in the cameras allow troops to accurately measure the distance of a target.

Speaking as the Ministry of Defence published its Science and Technology Strategy 2020, Mr Wallace said: “We are in a very real race with our adversaries for technological advantage.

“Proliferation of new technologies demands our science and technological technologies to be threat-driven and better aligned to our future needs.

“What we do today will lay the groundwork for the decades to come.

“The history of warfare is not just a story of revolutionary scientific breakthroughs – the muskets or machine gun, the radio or radar, the tank or the type of engine – but how those inventions were used, and integrated, with other technologies to fight and win in new and unexpected ways.”

The X3 will also allow tank platoons to avoid entering a battlefield until it has already been scoped out. 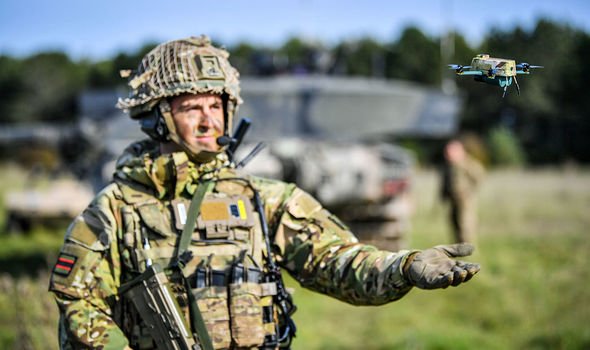 Sergeant James Teece, 30, of the Royal Tank Regiment, told the Daily Express: “It takes away the worry of ‘I can’t see over there, whereas if I put that over there, I can see that road now, I know there is nothing coming down it, so you protect yourself and your crew.

“We can come as a four, already know what is there, and engage. It is just efficiency.

“One of the other potential things they can do is deception. The speakers on the front are tailored to emit the same engine noise as the tank produces.

“So four of these could drive into a treeline, emit the noise and the enemy will think the tanks are in that treeline when they are actually on the other side facing the other direction. 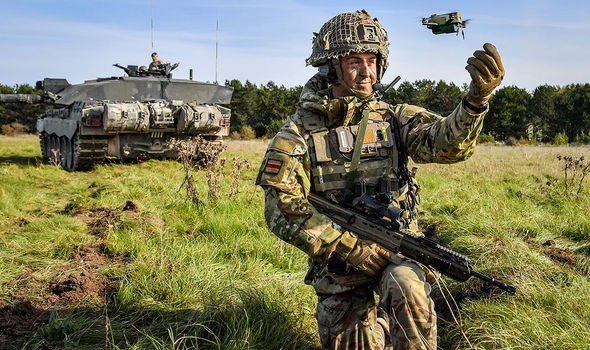 “We have worked with sophisticated systems for a long time.

“It wasn’t long ago that people thought this was a dying trade. Absolutely not. We think this is branching into the next stage of military action.

The Army also demonstrated, on Salisbury Plain yesterday, how a new Android Team Awareness Kit (Atak) can allow troops to see the position of other soldiers while fighting, helping to avoid friendly fire.

The mobile phone-style device, which is positioned on a soldier’s chest, also links to drones and autonomous vehicles fitted with cameras which act as “extendable eyes”, enabling troops to see a livestream of a target or threat miles away.

It also links up to the X3 unmanned autonomous vehicle, which can be fitted with cameras or speakers to distract enemy forces, or to send live footage back to troops.

The X3 can travel at speeds of up to 12.4 mph and has a range of about 1.2 miles but can be linked with other vehicles to relay information along a chain up to 15 miles long.

It can also be used to break into compounds, or clear roadblocks, with enough power to move objects up to three tonnes.

Mr Wallace admitted British troops have often “missed out on getting battle winning capability” as it took too long for new equipment to reach the frontline.