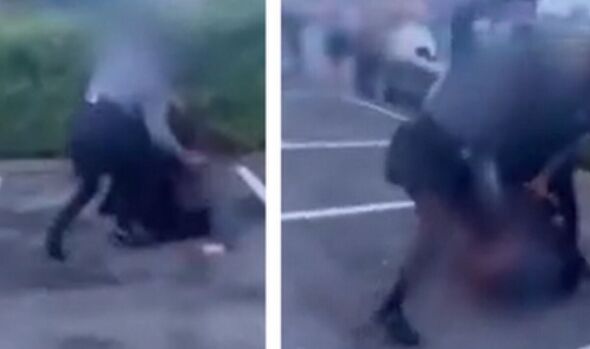 Police have made an arrest after a horrific video of a girl being beaten up was shared on social media.

The incident reportedly took place in a Tesco car park. All three teenagers involved appear to be from the Co-op Academy in Failsworth, Oldham, Greater Manchester.

Video footage shows a school girl being slapped, kicked and punched by two other girls as others watch on. The school released a statement saying “all approiate action” has been taken.

In a statement, Greater Manchester Police said: “Officers in Oldham have made an arrest after reports of an incident involving three girls, which had been circulated on social media.

“The video appeared to show two girls attacking another and police were alerted to it on the evening of January 17, 2023.

“As a result of proactive enquiries by GMP’s Failsworth Neighbourhood Team, a 15-year-old girl was subsequently arrested. She has since been released while the investigation progresses with further arrests expected to be made imminently.”

Superintendent Phillip Hutchinson of Greater Manchester Police’s Oldham district added: “We would always encourage people to report incidents of this nature, whether you are a victim or a witness, and I would like to thank those who have come forward with information.

“We won’t tolerate behaviour like this and our officers have acted swiftly to investigate once we were made aware of the video.

“The victim in this case is being supported by our officers as the investigation continues – if anybody has any information on this incident then I would encourage them to contact our dedicated team in Oldham on 0161 856 8825 or Crimestoppers anonymously on 0800 555 111, quoting log 003316-17012023. I would like to remind people that they shouldn’t be sharing this video or commenting on it as it forms part of a live investigation.”

Failsworth West councillor, Mark Wilkinson, posted on social media on Thursday: “As many of you are aware, yesterday evening there was an assault on Tesco car park, involving pupils from The Failsworth Co-op Academy.

“This afternoon, I have spoken to the Headmaster – Mr Quirk. He has assured me that he is fully aware of the serious incident, and confirmed that all the appropriate professional bodies, departments and the school itself, are working together to investigate and resolve this, as a matter of urgency.”

Meanwhile, the Co-op Academy in Failsworth said in a statement: “We are aware of a video circulating on social media. Safeguarding is our number one priority and this means we cannot comment on the content of the video. The incident took place outside of school grounds, outside of school hours but we are investigating fully.

“All appropriate action has been taken and we have involved the relevant authorities and external agencies. We are committed to our cooperative values and firmly stand against all forms of violence and hate speech.”

We’ll be bringing you the very latest updates, pictures and video on this breaking news story.For the latest news and breaking news visit: [/news](/news “‌”)Stay up to date with all the big headlines, pictures, analysis, opinion and video on the stories that matter to you.Follow our social media accounts here on [facebook.com/DailyExpress](http://facebook.com/DailyExpress “‌”) and @daily_express