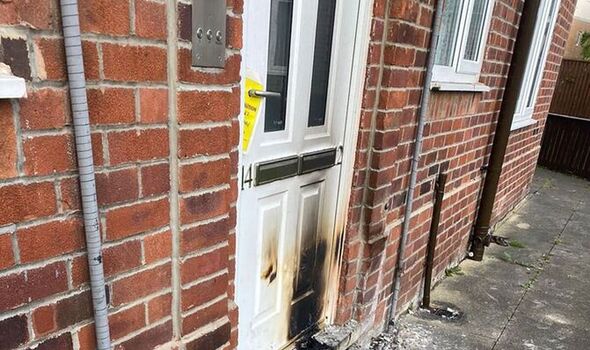 An arsonist set fire to her home in a housing block, terrifying her neighbours, but has been allowed to stay in the property.

Nora Ward, 62, was caught on CCTV “carrying something ignited” and laying it down at the communal entrance to the apartments in Wythenshawe, Manchester.

Nicola Wilde, who a court heard has been the victim of Ward’s nuisance behaviour for years, claims she had already pleaded with the local housing group to move her elsewhere.

Following the fire, Ms Wilde says she was so frightened that she had to leave her flat and stay with her partner some 40 miles away.

But Ward’s 15-month sentence for arson with intent to endanger life was suspended for two years this month, and she’s been allowed to carry on living in the complex.

Speaking to Manchester Evening News, Ms Wilde, 44, said: “She has set fire to the front door and now she’s allowed to come back and live there.

“I felt trapped in my own property and scared to live there.

“My mental health has been terrible. I’ve spent every day speaking to housing and it’s exhausting. I am having to live at my partner’s house 40 miles away.”

Manchester Crown Court heard previously that issues between Ward and Ms Wilde had come before the county court before, with Ward engaging in anti-social behaviour “in and around” the victim’s address.

In April and May there had been fires started in the communal hallway and doorsteps. Following the blaze on May 23, which caused £1,500 of damage, Ward told police she coul not remember what had happened as she had been drinking.

A victim impact statement from one neighbour, read in court, said: “The fires that have been set are getting closer to my property, I’m worried mine will be set on fire endangering me and my family. This could end up with somebody being killed by her actions. It’s got to stop before going too far.”

Ms Wilde said that, despite making repeated demands for the communal door to be fixed by Wythenshawe Community Housing Group (WCHG), this still had not been repaired months later. The housing group has blamed this on “supply chain issues.”

“This should have already been done, how can I reside in my property when the communal door is broken,” she said. “I know she has bail conditions but that doesn’t make my mental health any better.

“This has been going on since before 2016 and I have requested to move so many times and it still hasn’t happened.”

A spokesperson for WCHG said: “We are aware of the ongoing dispute between Ms Wilde and her neighbour Ms Ward.

“Following Ms Ward’s release from prison we are liaising with the police and probation services to ensure the appropriate safety measures are put in place.

“This will include replacing the damaged communal door which has unfortunately been delayed due to supply chain issues. In addition, Ms Wilde has been receiving assistance from our Living Well Team and we are supporting her request to be rehoused in another area.

“We are committed to ensuring our customers feel safe within their homes and take these matters seriously.”

Coronavirus: Man arrested for failing to self-isolate on the Isle of Man